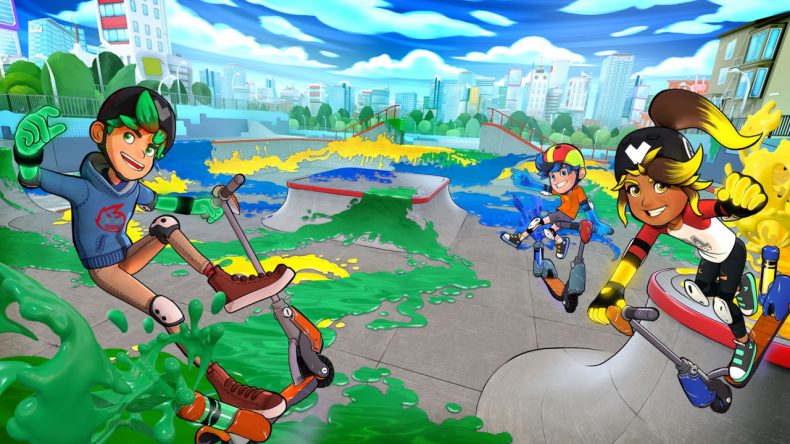 Outside of Nintendo’s fairly extensive catalogue, kids’ games tend to fall into two categories on console: simple, hollow, button-mashing tie-ins, or LEGO games. A few exceptions in the struggling toys-to-life subgenre notwithstanding, there isn’t an awful lot of variety. One thing rarely skewed towards a younger audience is extreme sports, and titles like SSX Tricky or Steep, while playable, are often dense, complex beasts that take even adults considerable time to master.

Enter, Crayola Scoot, part-Skate, part-Splatoon, to add some colour and simplicity to an otherwise niche genre. Following in the footsteps of skating franchises like Tony Hawks, Crayola Scoot puts you in the shoes of a rookie scooter rider (Scooterer? Scootateer?) on their first day in a giant scooter park. There is nothing realistic about any of this, thankfully, throwing you in against the lizards, knights, robots and aliens who make up the other unlockable avatars. The central conceit is that everything you do on your scooter sprays paint everywhere, splattering bright streams of Crayola goodness all over the world. In most events the amount of paint you spill directly relates to your score, and let’s be honest: what kid doesn’t like the idea of making a mess? In the main scoot park (of which there are several themed versions, including a rainforest, cityscape, waterfall, futuristic rollercoaster and others), there are special events you can trigger by tricking through special fountains called control points. This activates Mega Mode, which causes massive rains of paint thanks to blimps, waves, and giant robots that cover the park in colour.

Ironically, what lets Crayola Scoot down is the tricking. There are so many ways the developers could have made the controls easy and intuitive, and they’re just not. For some reason there are three different buttons assigned to boosting, while jumping is mapped to pulling back and pushing forward on the right stick. To grind, you need to jump to a railing or ledge, then hold the left trigger and Triangle, when one button would have done. To pump your leg and power the scooter, it’s the right trigger. It’s an incredibly fiddly control scheme that makes the simplest objective seem complicated until you get the hang of it. There’s a lot of charm in Crayola Scoot, though. It’s bright and vibrant, the character models are bold and the environments are as colourful as you could realistically hope. Playing as an adult used to more mainstream extreme sport games, it felt a little too slow-paced at times, but I got no such complaints from my kids, who were whooping and laughing together like it was the time of their lives.

A surprisingly varied list of modes provides enough to keep the experience fresh for younger players, even if the main thrust of the game is usually making more of a mess than your opponents. With 4-player local multiplayer available from the Arcade area, there’s a reason for the grown-ups to get involved as well, as Crayola Scoot provides the kind of lighthearted competition that makes for a great way to occupy those rained-in weekend afternoons.

Lots of modes
Bright and cheerful
Multiplayer is fun

Crayola Scoot provides the kind of lighthearted competition that makes for a great way to occupy those rained-in weekend afternoons.