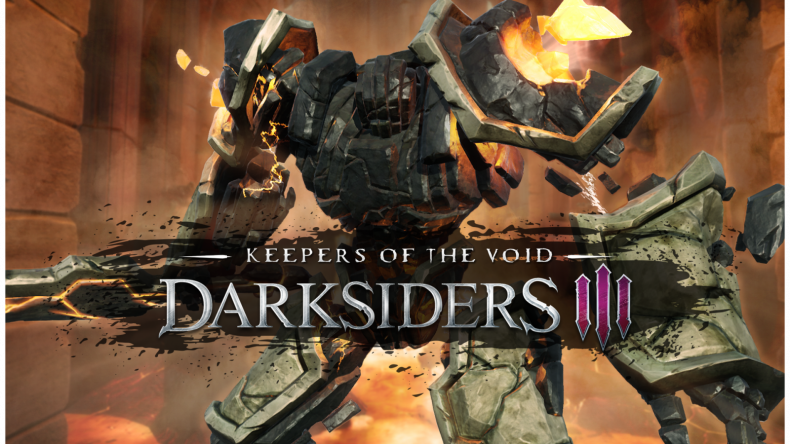 I loved Darksiders III. A series renowned for changing with each iteration, bringing that Soulslike style to the third adventure made for a challenging, yet rewarding, experience. That said, for a game that has so much story to tell, its DLC hasn’t exactly done anything to add to it. I didn’t bother playing the first DLC because it only added the wave-based arena of The Crucible, which was initially introduced in Darksiders II. While I did enjoy the rewarding combat, I was always more interested in the exploration, lore and storytelling, so naturally The Crucible didn’t appeal to me.

This second DLC however, Keepers of the Void, sees players returning to the Serpent Holes first seen in the original game. They were used to travel quickly between locations, with magical stepping stones allowing War to move freely through the Void (conveniently disguising load times, rather than using loading screens). This time, the demon merchant Vulgrim has been exiled from the Void by an invading entity, and strikes a deal with Fury to turf out this new enemy in exchange for great rewards. She’s not happy about it, but Fury’s never happy. Her name is Fury, after all. First off, it’s nice to see a few puzzles returning to Darksiders. The third game didn’t leave much room for them as it was more about the Soulslike risk/reward exploration and combat, and although the puzzles here aren’t too taxing, it’s still nice to have them back. Each “wing” of the Void offers its own puzzles that largely use the Hollow associated with it, involving moving platforms and finding the correct sequence in order to unlock the way forward.

This means that you can’t actually see all of the DLC until you have unlocked all four Hollows in the main story. You will simply be locked out of the next wing until you’ve found the relevant Hollow needed for its puzzles. The Flame Hollow moves platforms, while the Storm Hollow creates updrafts to reach higher levels or to glide over large chasms, though I’ll leave you to discover what the other two Hollows do for yourself.

There are new enemies patrolling the Void, though they are loosely based on existing creatures from the main game. This will help you to quickly learn their attack patterns, though it doesn’t exactly excuse their rather uninspired design. It would have been nicer to see truly new enemies, with different movements and attacks that would offer more of a challenge from each duel. Duels would be far more appreciated, if I’m honest. As you progress through each wing, the difficulty increases but not in a rewarding way. While it does introduce different, tougher creatures as you go, a lot of the time the extra difficulty comes from the DLC throwing several enemies at you in one go. At one point, in the final wing, I had to flee an area because I was surrounded by at least half a dozen creatures, one of which was tanklike in stature and one that could teleport and deal huge amounts of damage with each attack. It felt incredibly unbalanced, which is disappointing in a game that always felt fair, even when it was at its toughest. What’s more, the red-eyed versions of enemies that were tougher and guarded special items are back. Only, unlike the main game where they would be visible and wouldn’t attack unless you got within range, the ones in Keepers of the Void often materialise out of nowhere, not really giving you any option but to fight them. I was playing with my endgame Fury from when I reviewed the game, but a lower level player will likely be completely outmatched.

To be fair to it, Keepers of the Void does have a few memorable battles deep within its magical walls. At the end of each wing lies a boss construct, and although they all essentially look the same, each offers an increasing challenge that uses Fury’s own Hollows against her. I had a blast fighting these bosses, learning their attacks and dodging them, eventually getting into a flow that would soon be broken by a new stage in the fight, introducing new attacks that needed learning in order to make it through the fight alive. Each battle tested me more and more, with the eventual final boss proving to be one of the best in the entire series. I shan’t spoil it for you, but needless to say it was a huge challenge that came with a massive sense of accomplishment, especially as it took about a dozen attempts. That doesn’t entirely make up for a rather underwhelming overall design, though. The screenshots showed chambers filled with bright lava and open areas shot through with glowing blue magic, yet the majority of the DLC is spent running around the same stone walls, surrounded by bottomless pits of nothingness that make up the Void. While the actual level design is interesting, with multi-level puzzles that slowly build a path to the boss, on a visual level it’s way too drab, especially for a series that has always been beautiful and varied in its appearance. Disappointing.

Despite enjoying Keepers of the Void, I couldn’t shake the feeling that it was content cut from the main game. Content that was probably cut because it felt out of place and didn’t really do anything to add to the overall experience. I enjoyed the boss battles and the new weapons that were unlocked throughout, but it never really captured my attention the way Darksiders III initially did. It does last a good 3-4 hours at least, with a few optional areas that hide goodies behind increasingly vicious enemies, so it’s not lacking in content. It’s just a shame that said content isn’t of the same quality seen in the main game.

Repetitive design
Throws too many enemies at you

Keepers of the Void is an interesting addition to the game, with some great boss battles, but ultimately is a fairly repetitive and uninspired experience that does little to enhance Darksiders III.