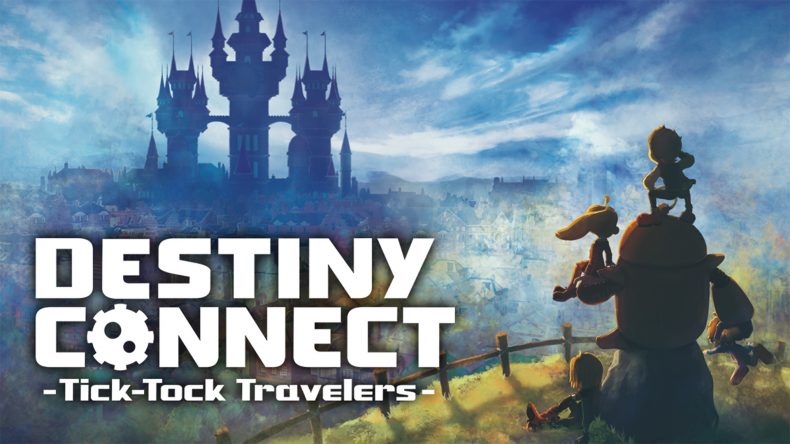 Destiny Connect: Tick-Tock Travelers is set in the town of Clocknee where everyone is celebrating New Year’s Eve on December 31, 1999. The millennium is nearly upon the town but strange things start happening. You play as a nine-year old girl named Sherry who tries to figure things out with the help of her friend Pegreo. When the clock hits midnight, time stops for almost everyone but Sherry, Pegreo, and a few other characters while they try and deal with hostile machines that have appeared in Clocknee. Soon they meet Isaac who is a charming robot that can take on many forms. Sherry’s town has been left behind and she alongside her companions will travel across time to sort things out. Combat is a rather straightforward turn-based affair with Isaac being able to offer a variety of options thanks to the ability to transform into healers, attackers, and even a robot cowboy. Barring the battle theme that is awesome and Isaac’s transformation, combat isn’t anything special here. The non-combat sections in Destiny Connect: Tick-Tock Travelers see you exploring through Clocknee and interacting with what’s left after time has stopped.

Destiny Connect: Tick-Tock Travelers runs on Unreal Engine 4 and I think this is the first game from NIS in Japan to use it. The default camera movement and auto-adjustment is really bad. I recommend playing around with the settings as soon as you gain free control of Sherry because you might get motion sickness by the fast camera movement that happens over and over again in some closed areas. The character designs are very good. I can see a Jimmy Neutron inspiration on the human characters for sure. Overall, the image quality is not great in both docked and handheld modes. It is noticeably blurry while the interface is thankfully crisp. In fact, the interface and all the menus are very well done. I love the gear aesthetic used and colour scheme across the board. On the performance side of things, barring some cutscenes that stutter and slowdown, Destiny Connect: Tick-Tock Travelers runs fine on Switch in both modes. The real bummer is that while there is no voice acting, there isn’t even any dialogue sound like Nintendo DS or 3DS games. The dialogue is accompanied by literally nothing. This is off-putting.

The music on the other hand is excellent. While there is a lot of repetition in the music, the few tracks available initially are very nice. The basic exploration music in town and the first battle theme are standout tracks right from the get go. I knew I was going to like the soundtrack from the little time I put into the Japanese demo but the tracks do not get old at all. There’s a nice contrast between more relaxing tunes that are piano driven and some of the upbeat synth ones. Destiny Connect is a very nice introduction to JRPGs for a younger audience with its simple story and basic combat that will last you just around 15 hours which is fair for the budget price. It isn’t ambitious at all and while that isn’t really a dealbreaker, the performance issues in cutscenes, overall image quality, and silent dialogue is something I hope can be addressed in either a sequel or patches. If you’ve enjoyed games like The Longest Five Minutes from NIS America, this will be up your alley.

Image quality on Switch
No voice acting or dialogue sounds

Destiny Connect: Tick-Tock Travelers from NIS America does a lot right right and is a good beginner's JRPG but has some major technical and design problems.