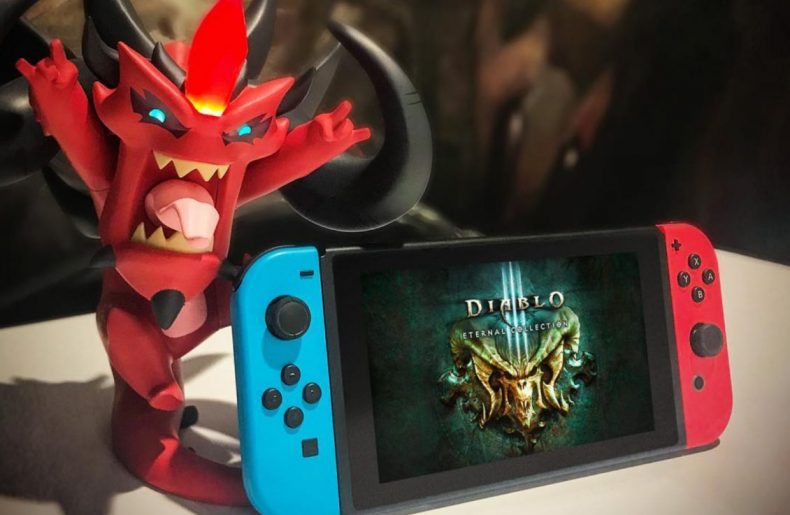 It’s almost ironic given the controversy surrounding Diablo 3 at the time of its original PC launch in 2012 that it’s so popular now. It’s instant-action loop of attack-spamming and quick gratification garnered it a huge following when it was ported over to Xbox 360 and PlayStation 3, and since then it has gone from strength on current-gen consoles, beginning with the incredible Reaper of Souls expansion that introduced the righteous Crusader to Diablo 3’s roster of heroes.

With patch following patch, each bringing new and improved ways to play, interact and loot, it’s no surprise that people were still excited five years after launch when the Rise of the Necromancer update was released, bringing with it yet another new class and a variety of quality of life improvements. I’ve played Diablo 3 a lot, beginning with the original PC version, which in retrospect now seems horribly limited. I also played the initial port on Xbox 360 to death. I Platinum’d it after Lord-knows how many hours on PS4, and yet I was still excited by the prospect of a new port on the Switch. Although initially unable to fathom why I was so giddy, I eventually narrowed it down to one single, all-eclipsing reason: now I can play Diablo 3 on the toilet.

It was the one thing missing: true portability. I can’t accurately recall the amount of times I begrudgingly dropped the controller to limp cross-legged to the John after the “one more bounty” impulse had been overriding my other basic bodily needs for several hours. The piss-poor range of the Vita’s remote play mode just couldn’t cut it.

It’s become a meme to say that something is “perfect for the Switch” these days, as it’s a tagline attributed to pretty much everything from Doom to Dark Souls, neither of which, in actual fact, is perfect for the Switch. But Diablo 3 kind of is. You don’t even have to play the story anymore, which I suspect is an attempt to placate people who are upset they can’t port characters from other platforms. Now you can jump right into Adventure Mode from the get-go, which basically means you can either settle in for a two-hour session or knock a couple of bounties out on the bus on your way to work or college. Of course, if you’re a newcomer, you may prefer to run through the campaign, and that’s fine, too, although it does tend to go on a bit thanks to the Reaper of Souls add-on. For those new to the series, the plot follows Leah and her uncle Deckard Cain, the wiseman who has been guiding Diablo heroes since the first game launched in 1996. The armies of Hell are rising as a celestial war between angels and demons has spilled into the mortal world of Sanctuary. Leah is central to the plans of three Prime Evils, and only a Nephilim, born half-angel and half-human, can stop them. Which is where you come in.

In the Switch version you have access to all 7 playable classes right away: Barbarian, Monk, Wizard, Witch Doctor, Demon Hunter, Crusader and Necromancer. Each is unique, presenting you with a multitude of build options thanks to a layered skill system and an incredible loot economy. You’ll need to reach the soft level cap of 70 to unlock every skill, but once you do you’ll continue to gain XP levels that offer incremental increases to your survivability and loot tables and benefit every level 70 character you have.

The campaign is fast and frantic, as your primary goal is to obliterate everything in your path until you reach a boss fight, which will advance the story and open the next area. Alternatively, Adventure Mode offers you instant action in the form of bounties, a huge variety of bite-sized objectives that take place in small sections of the procedurally generated campaign maps. Bounties offer large rewards of gold and XP, and completing all five in a given area will grant you a special reward from Tyrael, the Archangel who acts as your mentor throughout the campaign.

The skill system lends itself well to both multiplayer and solo runs. Each character has its share of buffs, debuffs and crowd control techniques, and any combination of classes is viable when playing with friends or strangers. The Switch version offers 4-player couch-co-op (if you have enough controllers), which is incredibly fun but can be frustrating when you’re all trying to micromanage your character’s gear and the menu screen blocks everyone else’s game, forcing them to sit and wait until you’re done. Played online it’s easier, but of course you lose the undeniable magic of playing together on the same screen. Lootaholics will struggle to get bored of Diablo 3. With each foray into an area presenting a new layout, different enemies, events, NPCs and loot, the loop of killing, looting and levelling is one of the most satisfying available today. Difficulty can be raised and lowered at a whim and not only affects the challenge but what kind of rewards you can expect. The higher the difficulty, the more chance you have of finding unique gear. It’s a stat-heavy game, and experienced players can spend ages tweaking builds and skill loadouts to achieve maximum efficiency, especially once they’ve capped a character and are into the business of running Challenge Rifts and adventuring at Torment Level 6.

A smattering of Nintendo-centric bonuses come with the Ultimate Evil Edition on Switch. There’s a Tri-force themed portrait frame, an option to transmogrify your armour to resemble Link’s nemesis, Ganondorf, and a Cucco (chicken) pet. There’s also support for Amiibos, although the only result I’ve seen from using one so far is a random mini-boss fight. I’d have prefered to see unique gear and weapons drop as a result, but it’s nice to see them utilising the functionality. The other unique Switch feature is one I discovered (or rather, my daughter did) accidentally. When playing with the Joycons, rolling the wrist activates the combat evasion usually mapped to the right stick on consoles. I can’t see a single reason this is useful, but I suppose Nintendo gotta Nintendo.

The Nintendo Switch joins the Diablo 3 family during Season 15, with full Seasonal support and all the previous updates and DLC releases, totalling a hell of a lot of game to get through between the Campaign, Adventure Mode and the Challenge Rifts. Each Season offers unique rewards and events for a certain amount of time, and are the only way to get hold of rare cosmetic items like Wings and Pets. Quite impressively Diablo 3 runs at a locked 60 fps whether handheld or docked, even when the screen is filled with monsters, magical spells, and flying limbs. It’s worth pointing out though, that some of the graphical fidelity seen in the PS4 or Xbox One versions is lost in the port. The Switch version looks nice enough, but there is a noticeable dip in texture quality, with the character models in particular taking on a slightly blockier look, especially when playing docked and viewing Diablo 3 in all its grim glory on a larger screen. The environments remain atmospheric and well-detailed, but it is a downgrade that some players will notice.

There are two types of gamer to whom this version of Diablo 3 will appeal most: those who missed the game on the other platforms, and those who simply want to play it during a commute or, as mentioned, as an alternative to counting tiles or Facebook-stalking workmates while on the bog. For my money, the PS4 version is still the best, but we’re down to the nitty-gritty of which one looks better to reach that verdict and, honestly, to many players the difference will be an acceptable trade-off for the ability to play Diablo 3 on a handheld.

Diablo 3 on the go
A massive package
Runs like butter

Not as pretty as the other versions
No new content added

The PS4 version is still the best, but we’re down to the nitty-gritty of which one looks better to reach that verdict and, honestly, to many players the difference will be an acceptable trade-off for the ability to play Diablo 3 on a handheld.