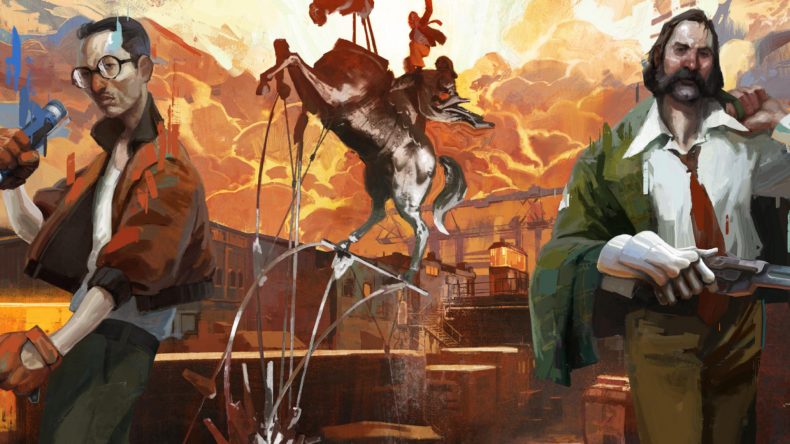 Disco Elysium is weird. Not many games start with a black screen and nothing but conversation text, as you try to talk to your own brain and nervous system, bargaining with one another as you decide whether you should wake up or not. It’s bloody funny too, with a description of the human race that legitimately made me laugh out loud.

Upon finally waking, my character is a delightfully sleazy looking fella with long, greasy-looking hair…and he’s lying face down in the middle of a trashed apartment. Did I mention he’s in his underwear? Not boxer either, they’re proper tighty whities. He battles to regain his senses, apparently chased away by several days of heavy drinking, while picking up his discarded clothing from various parts of the room. The whole sequence is a bizarre, but somehow ingenious way to introduce the character you’ve chosen and the basics of the gameplay mechanics and controls.

The daftness continues, as you meet a few people and talk to them with the often ridiculous responses available. No matter how you play, your character is a degenerate cop with a drinking problem, perhaps worse. He has lost his badge and gun, a problem exacerbated by the fact that he has lost his memories. He doesn’t even remember his name, which leads to even more weird and wonderful conversation options and humorous responses. But this humour is quickly shattered by the setting. Revachol, a fictional island in the 50s, is full of racists and all manner of nasty people, which explains the dead body hanging behind the building in which you started. An extremely unpleasant teenager is throwing rocks at the body, cheered on by his equally unpleasant friend, both of whom use language that even the game censors. This shift in tone was incredibly jarring for me, and it happens quite a lot. It just left me confused as to what Disco Elysium is supposed to be.

As a game, Disco Elysium is an RPG, not unlike the Torment games. It doesn’t have the Dungeons & Dragons combat or its fantastical setting, but there’s a similarity nonetheless. It also has a bit of a point and click feel, as you wander around the town, investigating the crime scene and interviewing people about what they know. Or don’t. Or maybe they do, but your character doesn’t have the relevant character traits to successfully ask the right questions. This is where the RPG/Torment comparison comes into play. Certain conversation options require more points in the Intellect side of things, while others might need a bit of Motorics or even Physique abilities to get you through the situation. You have to be careful in deciding how to build your character at the start, as well as how you level them up, because the game seems to really lean toward the more thinking individual. Pick a more strength-based archetype from the start and you’ll likely struggle in the early hours as you fumble your way through conversations.

This is, in part, due to the dice rolls that take place upon choosing certain options in conversation. Much like a Dungeons & Dragons game, Disco Elysium will need you to roll these dice (not literally, it’s all hidden) to see if you can successfully ask that question, or make a comment that will influence the direction of the NPC’s responses. Or perform certain actions, in some instances. The game will always let you see your chances before you try, with an almost XCOM-like percentage of the likely outcome. The problem is, like XCOM, I often found my dice rolls (or “checks” as the game calls them) failing even with higher percentages. This would be fine if it simply changed the direction of the conversation, or affected your relationship with them, but there are also options that can lead down some dark paths. These paths can lead to morale drops which, if you don’t have medication to counteract the drop, can actually lead to a game over. I didn’t discover how to counteract it at first, either. This is precisely how I learned about the game over scenario, and I wasn’t best pleased about having to reload a save and go through it all again.

It was interesting going into this game, as I genuinely didn’t know about it until the code was sent to me. That black-screen opening and the genuinely funny talk with my character’s insides, the amusing mirror sequence in the apartment (I won’t spoil if for you here) and meeting my partner for the first time, it all built something intriguing. The setting of Revachol and the grim subject matter that kicks off the main storyline, they caught me off guard and although it felt a bit jarring, I still wanted to learn more about everything. Then came things like having to find money to pay for lodgings, and major conversation options being locked behind progression elsewhere (often with the game literally telling you that those things might happen at random), and it soured the experience somewhat. I found myself enjoying it less as time went on. However, there’s no denying the intelligence and quality in the writing. The voice acting, though only used for certain lines, is largely excellent. Cuno, the horrendous child I mentioned earlier, just sounds as nasty as his language suggests. The voice actor deserves plaudits for helping to create a character for whom you come to feel a little sorry, while simultaneously despising with every fibre of your being. I sometimes wished there were no dice rolls involved, however. I wished that I didn’t have to wait several in-game hours for certain things to happen, or for my character to learn something in their thought cabinet: a place where you can store limited information, sometimes integral to progress.

Disco Elysium feels like a game that would have been better suited to a point and click adventure, rather than a sprawling RPG. It’s a game that has a lot to say (quite literally, given that it’s made up of around one million words) but doesn’t always know what tone to use while saying it, which leads to an experience that just didn’t captivate me as much as it might others. Its characters are almost universally disgusting excuses for human beings, which also didn’t help as I found nobody to relate to or latch onto. Doesn’t mean they’re not well-written or acted, but it’s difficult to care about characters you just cannot like. ZA/UM’s game is undoubtedly good and many will enjoy it, especially if you like reading copious amounts of text and getting lost in game mechanics that aren’t always made clear, but I struggled far too much to say that I truly enjoyed it.

Disco Elysium is an intelligent game with lots to say, but struggles with its tone while saying it.