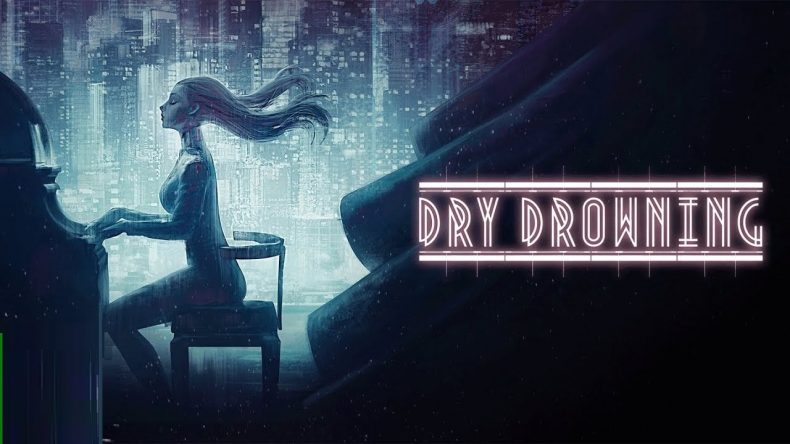 As morbid as it is, many people share an odd fascination with serial killers, as many TV shows and movies have proved over the years. Sure, we abhor their actual deeds, but I think we are intrigued by their reasons. What made them so evil? Movies and TV series provide villains that we latch onto, and many of us have felt that rush when the recurring villain reappears in our favourite TV series. It’s never nice, but you know that the story will come to life in that episode.

What about games, though? Many have featured serial killers in one way or another, but few have dealt with the subject in quite the same way as in other media. Dry Drowning attempts to change this, with the main character, Mordred Foley, haunted by the return of Pandora, a serial killer from his past. While it doesn’t necessarily always get it right, this visual novel does do a good job of recreating some of the disgust and the morbid fascination that we experience watching movies like Seven.

Private investigator Mordred Foley and his partner, Hera, aren’t popular in Nova Polemos, a dystopian city filled with corruption. Apparently responsible for the death of two innocent people, but somehow cleared of the charges, Foley Investigations is all but dead. Nobody wants anything to do with them and Hera fears for their safety. Still, the leader of a political party has been arrested for a gruesome murder and Mordred is drafted in to help clear the grimy politician’s name, at the expense of the truth and no matter the consequences. All this, in exchange for the clearing of the Foley and Hera’s names. The thing is, the killing seemingly heralds the return of a serial killer from their past. This is where Dry Drowning truly begins. Unfortunately, it’s also where its problems begin. You see, Mordred knows when people are lying, because a strange mask will appear over the face of the person talking. For some reason. During certain parts of each chapter, you are meant to expose a character’s lies using evidence you discovered during your investigation. This sounds simple enough, except Dry Drowning’s “Living Nightmares” system aims to block your progression. You are given three lives, and if you fail to provide the correct answer or piece of evidence during the interrogation, it’s game over and you’ll have to repeat the whole scene again. In one instance, I was even given the “game over” treatment outside of this system. The game gave me no indication that this would happen, then it forced me to repeat the whole scene. I genuinely couldn’t believe what happened. It was like the Gears of War “look at all that juice,” scenario, all over again.

This isn’t the only issue, as there are a handful of puzzles within the game that just don’t fit. I was literally forced to solve one puzzle as part of an in-game video game, and it honestly felt like filler for filler’s sake, almost as if somebody had no idea how to incorporate a scene to indicate the passage of time, instead deciding to add in a video game for some random reason. The game even tells you that continuing to play the game might do something, and that’s all the information you get. It felt like the equivalent of adding arbitrary collectibles to pad out an open world game.

Dry Drowning also prides itself on its choice system, with your decisions “drastically” affecting the story beats. This is an interesting concept, that can work well if implemented correctly (Tokyo Dark is a good example), but here it still tends to lead to the same “A or B” chapter endings. These endings tend to feel pointless, as neither choice ever gives you a sense of accomplishment, as they almost always seem to boil down to choosing to condemn one person or another. That’s not to say that the chapter endings lack impact, but I couldn’t help but sigh when another chapter ending basically gave me another lose/lose choice. Dry Drowning’s problems are a shame, because they sometimes overshadow what could have been a spectacular visual novel. The first chapter lays some excellent ground work, but the rest of the game never quite lives up to that promise. Even when things start to take a turn for the better, drawing you back into the chase for Pandora, it’s ruined by things like the Living Nightmares system. Often, the game will expect you to know the answers without actually providing them through the gameplay. On several occasions, I had to brute force an interrogation, made worse by being unable to skip anything when I inevitably got something wrong and I’d be made to go through scenes fully…again.

At times, I really enjoyed the story and some of the characters were interesting, if flawed. But that’s actually what made them interesting, except for Mordred himself. He’s genuinely just an irredeemable bastard, totally unlikeable. There were moments within the story when I had to make a choice, only for him to literally make it clear to the player that he wasn’t going to follow through with the decision. His behaviour is inconsistent at best, psychotic at worst. I suspect that Hera was meant to help balance out Foley’s sociopathic nature, but the writing never really gives her the chance, as she’s often basically ignored.

I wanted to like Dry Drowning, with its promise of a dark and absorbing plot. Its gameplay, like most visual novels, was simple and easy to pick up, but then it made little mistakes like adding puzzles that felt completely unnecessary. Crucially, its Living Nightmares system, offering only three lives to get through interrogations for which the game often didn’t prepare me, just ruined my enjoyment of the story. On one occasion, Foley had actually seen something himself but I wasn’t shown, though he was then meant to use his knowledge to progress. That kind of thing just isn’t acceptable. Again, all I can say is: it’s a shame.