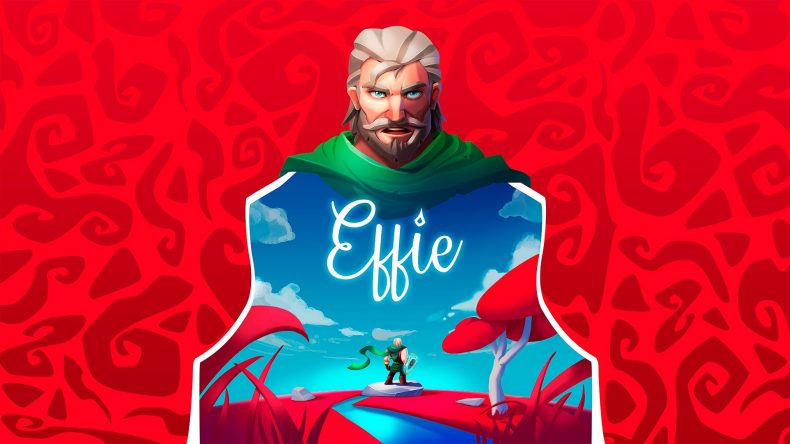 Effie is a 3D puzzle platformer with a pronounced nod to games of yesteryear. It features a familiar tale of a strong but selfish man who is cursed and who, ultimately, finds redemption by helping others. Appealing Disney-esque visuals, simple combat and straight-forward puzzles move the platforming along, but there is a definite sense of blandness most keenly felt with a large empty open-world space and uninspired Boss fights that do much to dampen your overall enthusiasm.

There is an interesting premise at work in Effie, one where we are ultimately the architects of our own story. This story’s hero is Galand, a strong young man who has had his youth stripped from him by a curse from an evil witch after he refused to lend his strength to help a young woman with her cart. You play as Galand, but he also serves as the game’s narrator, recounting his, and your, tales of heroics to the titular Effie. As you play he provides hints and tips on how to play, neatly dovetailing the story narration with the game’s tutorial. Effie is stretched across a number of chapters, each one a city in the region of Oblena; there’s Windmill town characterised by a number of huge windmills that you will need to navigate and get the sails turning again, and a stand-out area called The Vineyards that sees you delving deep into wine-making vats to get the wine flowing properly again. Each chapter is a linear experience, but linking the different towns together is a huge open-world space called The Red Plains of Oblena. The Plains hide various collectibles, as well as some mini-games in the form of platforming puzzles and a speed-racing circuit along with a few other challenges. The area serves as a sort of hub area and breaks up the linear play, but it feels sparsely populated and there doesn’t really feel like much to keep you engaged or drive you to explore other than collecting the myraid runes dotted about the place that serve as a means of improving Galand’s strength and power.

Throughout the course of play you will get various upgrades in terms of Galand’s abilities, but there’s no customisation in terms of skills you can equip. To get stronger you will need to collect runes which, upon collecting enough, will increase your stats. Thankfully runes are littered across the levels and more can be found in various chests dotted around so it doesn’t feel overly difficult to improve your ability, not that any of the enemy types found in Oblena offer much in the way of challenge. Combat is straight-forward, Galand has a shield equipped that acts as a weapon which he can use to bludgeon enemies with both a light and strong attack. As you progress you’ll be given additional abilities for the shield which include being able to use it to double jump, ground slam and shoulder charge enemies. Each chapter comes with a new ability and other than switching up your options for battle a little more, they only really come into play with the boss battle you are faced with at the end of each chapter. There are plenty of games that have you fighting the same enemy throughout the course of a campaign, and Effie is no exception, with each chapter topped off by an encounter with the witch that cursed you. The issue with the boss battles here though is that, other than some additional environmental hazards, the actual attack pattern of the boss is the same across each chapter with some minor exceptions. So similar are the finales to each level that after you have done it two or more times it just feels like a chore rather than an exciting culmination to what you have done to the get there.

Visually, Effie is quite strong with a cute, Disney style aesthetic. I particularly liked the over-sizing of a lot of the environments which gives the impression that you are moving Galand through a huge toy box environment. The Vineyards level was my favourite with Galand making his way through the hazardous grape presses and navigating rivers of wine in a scene reminiscent of Charlie’s travels through the Wonka factory. It’s a shame then that everything else feels a little bland. The lack of variety in boss fights, as well as no real sense of challenge from the platforming sections to the combat, and even in the puzzles you are confronted with make this title one that is perhaps best suited for a younger audience. Not a bad thing by any stretch, but it does feel like there has been a missed opportunity to blend old-school 3D platforming elements with a more modern approach by making exploring Oblena something you want to do rather than just a way to break up the linearity of the main quest.

Effie is a 3D puzzle platformer with a strong nod to games of yesteryear. Simple combat as well as a lack of any real challenge and samey boss fights make it a title best suited to a younger audience.