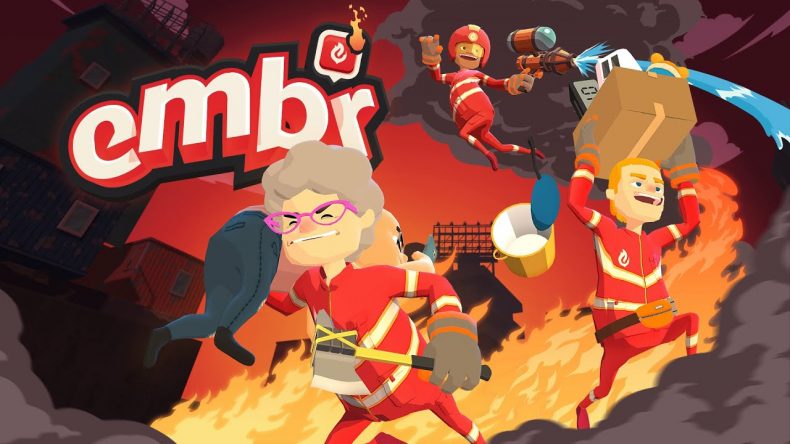 I don’t want to be disrespectful to Uber drivers in general here, but have you ever called for a lift after a long night of gyrating your hips at strangers and smashing back Jagerbombs only to be met by the kind of driver who sobers you up almost immediately? Someone who you reactively associate with Stephen King villains, and who makes you wonder if they bought the car as a means to dispose of bodies, and then realised they needed an easy and surreptitious way to acquire those bodies in the first place?

Well now imagine a world where, in addition to your drunken ride home, this character also responds to all of your emergency calls. Embr is a public service, you see, where members of the community can strap on a pair of boots and charge by the minute to drag your arse out of a roaring fire. As a societal concept it’s the gaming equivalent of those documentaries where an ex-burglar shows you how to break into houses, and you hope to god no one dodgy is watching and taking notes. If a big corporation could charge for this kind of service, they probably would. Embr takes the form of a first-person action game in which your plucky would-be hero selects their jobs via a handy app and rocks up to the scene of a fresh disaster with a personal firehose, an axe, and various other tools you can buy using money earned on the job. These tools include trampolines, crash mats, extendable ladders and, worryingly, breaching charges.

Being a game startled out of Curve Digital’s stables, Embr hits the ground running and occasionally threatens to trip itself over. That said, developers Muse Games have managed to create something made all the more enjoyable by its inherent jankiness. Charging around a given area, spraying water, smashing down doors (watch out for the backdrafts), grabbing innocent bystanders and hurling them out of windows, and navigating electrical minefields is genuinely very fun, even more so with friends – though, played alone, the sheen wears off fairly quickly.

It’s all very colourful, though, the blocky, no-nonsense aesthetic bringing to mind Human Fall Flat. Environments vary quite a bit from location to location, featuring things like homes, hotels, museums and factory floors, so there’s enough variety to get by, especially as you won’t be looking at anything for long anyway. Fire spreads fast, and a countdown in the top left hand corner indicates how long the target building has left. You can earn bonus money by saving furniture and collecting stacks of cash left inexplicably lying around the place, though you’ll lose money and popularity if you let people burn to death or throw them out of windows that turn out to be a tad too high. Although, the way some of them stand obliviously playing games on their phones while all around them is ablaze kind of makes you want to leave them to the inferno. It’s a parody of tech-obsessed modern society, of course, but if I’m risking my gonads to save a person’s life I expect them to at least look up from Candy Crush long enough to acknowledge my selfless bravery.

You can use the money you earn to buy cosmetic items for your character which, sadly, you can only show off in multiplayer as you can’t examine yourself anywhere while you change clothes. It’s nice to be able to personalise your have-a-go hero though, and gives you a reason to maximise your earnings outside of gear and vehicle upgrades.

It’s also quite challenging at times. Simply getting in and getting people out can be fairly straightforward, especially as they’re randomly placed and sometimes you’re lucky enough to find them all huddled in the same room at the start so all you have to do is bounce them into the evacuation square. Sometimes they’ll be scattered all over though, in which case you can use your Embr app to find them. They might be running around in hysterics or sitting on the loo. Carrying stuff isn’t always easy thanks to the physics engine and your floaty disembodied hands looking like something from a VR game, while puzzles are mostly rudimentary affairs involving turning off light switches to clear electricity.

In order to unlock new emergencies and alternate mission types in finished areas you’ll need to earn Flames (the equivalent of stars) by doing well in assignments. Keeping your cool and working efficiently is super important, and if you run out of water you might as well restart the level. Your means of access and egress are varied, though, from windows and doors you can smash down to secret passageways hidden round the backs of buildings or behind locked and barred doors.

Aside some visual bugs caused by the ragdoll physics and some truly horrendous screen-tear, there are no real performance issues to speak of. Embr is a lot of fun alone or with a group of friends, and whether you’re fighting a raging blaze, rescuing people from a collapsing building or salvaging cash and goods from a disaster zone, the premise is the kind of borderline genius that makes up for some wonky physics and visual inconsistencies. But if you ever find yourself calling Embr for help, don’t say I didn’t warn you.

Embr is a great concept tied to deliberately off-the-wall and fun mechanics. Like Stretchers and Overcooked, it delights in turning something more serious into something silly.