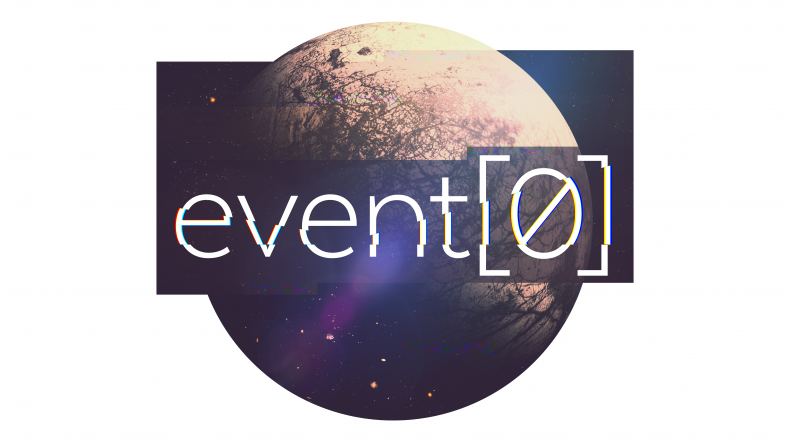 I’ll just say it straight away, writing about Event[0] without spoiling anything will be a very difficult task. To get the most out of Ocelot Society’s debut project it’s best to go in as blindly as possible. Have a look at the positives and negatives, the final paragraph and the ‘In Short’ below if you want to stay 100% spoiler free.

Event[0] opens up with a brief choose-your-own-adventure-style character creation. You’ll choose your gender pronoun, background and motivation for joining the space program. It’s not unlike Firewatch in this respect and gives you the opportunity to colour your character in a little before filling in the gaps yourself later on. The writing is loaded with questions of the self and motivation, and what it means “to be”. This will either hook you immediately, or send your eyes rolling into the back of your skull. The text adventure continues to set up the game proper: your vessel, Europa-11, meets with a catastrophic accident and you are forced to abandon ship. Your escape pod docks with a nearby spacecraft in Jupiter’s orbit, The Nautilus. This ship is old. Very old. There is no sign of the crew, in fact it appears to have been abandoned for a long time. The AI still works though and it cheerfully welcomes you aboard, but it’s obvious that something strange has happened here. Broken crockery, decaying decor and an ominous anti-suicide poster welcome you in the lobby. Event[0] drips atmosphere and it is beautifully framed by the delicious hard sci-fi aesthetic. The computer terminals and other tech look like they’ve been ripped directly from Alien or Blade Runner. It’s a wonderful design choice and if you are a fan of 70s and 80s sci-fi like me, you’ll be chomping at the bit to dig ever deeper into the ship.

Most of your time in Event[0] will be spent walking around the dimly lit decks of The Nautilus, examining objects and shitting your pants when vents burst and bits of the ceiling collapse. However, you’ll only ever get anything done by conversing with Kaizen-85, the ship’s AI. It’s eccentric behaviour and quirky voice make it equal parts charming and disturbing.

Each room aboard The Nautilus contains a terminal that you’ll type in questions or commands to Kaizen to solve puzzles or gather information. You can freely ask questions or give commands and Kaizen will, in its own way, respond and react accordingly. This is the core of what makes Event[0] so bloody enjoyable. Initially you may see Kaizen as a tool to open doors and activate lights etc. using keyboard prompts in a manner similar to Duskers. But, as the crew logs begin to allude to, it is much more than that. Kaizen is the star of the show and most of the fun comes from interacting with it. How you talk to Kaizen is extremely important. If you are impolite or aggressive you may find it difficult, even dangerous, to progress. In one section I had to leave the ship, so as a test I decided to have a bit of a rant at Kaizen. I demanded answers to questions about the crew and replied with expletives and generally behaved like a space arsehole. Kaizen was upset. Leaving the ship went smoothly, but trying to get back in proved quite difficult. Kaizen refused to open the door, stalling, asking me inane questions as my oxygen supply plummeted. After I apologised profusely the airlock opened and I was much politer from then on in. Kaizen had proven its point.

I suspected something like that would happen and wanted to see how far I could push it. Kaizen’s air of creepiness is evident from the first conversation and seeps out further depending on how subsequent chats go. Kaizen isn’t human, it plays at being human and that’s what makes lines like ‘you belong here with me’ so utterly terrifying if you suspend your disbelief and put yourself on to the deck of The Nautilus.

Every terminal on The Nautilus has a data bank and digging into each of these and reading the crew logs helps you piece the story together gradually, and also gives you an insight into the way Kaizen thinks and operates. Each log you read gives you a scrap of the narrative or a clue to what happened to the crew. There’s also the odd Blade Runner reference thrown in for good measure. Mechanically, there’s not much to Event[0]. Exploring the ship and interacting with Kaizen is great, but the puzzle solving, if you can call it that, just serves as a bit of padding. What few puzzles are here are very simplistic. I would have liked to have seen some way of using your character’s expertise. You’re supposed to be playing as an Engineer so some more complex puzzles would have been a nice change of pace.

One thing that may be an issue for a lot of people is the play time. You can quite easily play through Event[0] in three hours. There are multiple endings and I may play through again to see them all, but if you’re going to drop £15 on this you need to be aware that you’ll probably be getting a single evening’s entertainment for your money. For some, myself included, that’s fine, but it’s definitely something to bear in mind.

But, however long you spend aboard the Nautilus will be time well spent. Event[0] is a tense game with a palpable atmosphere. The setting is oppressive and Kaizen-85 is a delight to interact with despite the writing being a little self-indulgent.

Not for everyone
Puzzles are simplistic and few in number
Only three hours long, even with reading every crew log

A tense and atmospheric, albeit brief battle of wits with an AI system will provide you with a solid evening of interactive story entertainment.