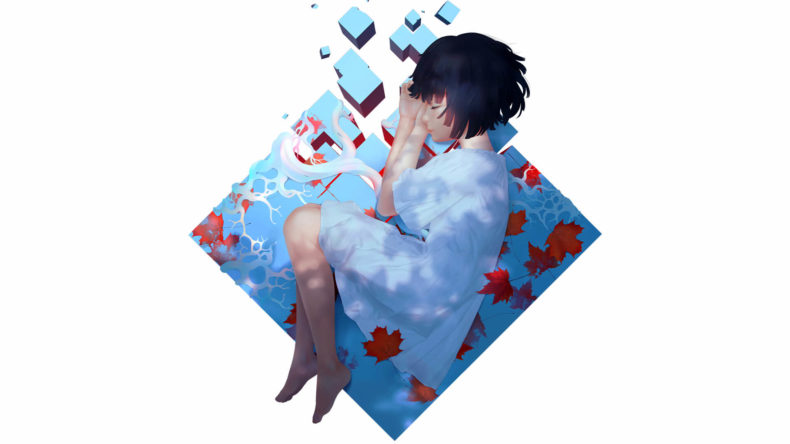 Poor Maya. Not only is she seemingly neglected by her overworked mother, not only does she apparently live in a dystopian city that doesn’t allow people to go out at night, she now finds herself trapped in a dreamworld filled with murderbots and her only hope of escape is solving puzzles.

Okay, so there is a little more to it than that, but Ever Forward is a puzzle game so that is exactly how you are expected to progress. I also embellished the point about murderbots too, that was purely to get your attention. Although there are robots and they will murder you. It’s actually a very dark game, the more I think about it. 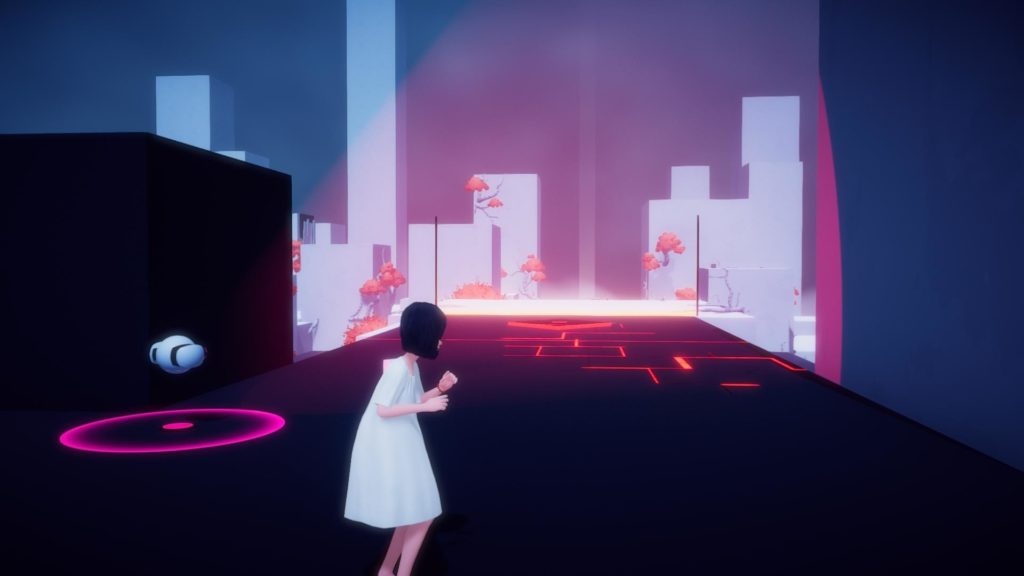 Ever Forward begins with Maya, a young girl in a floaty white dress, running out of her house on an idyllic island full of greens and yellows, surrounded by the bluest of blue oceans. She enjoys the sand between her toes as she runs to the edge of the beach, and we’re right there with her, admiring the beautiful vista. There is something special about the colourful palette of the island, but there is also something wrong. We are shown a flash of a view that doesn’t match up to Maya’s surroundings, something futuristic, before darkness and corruption begins spreading around various points of the island. It’s actually quite Breath of the Wild in its style, while out on the island.

It’s when you leave the island that things take yet another turn. Every time you find a corrupted area, you’re transported to a surreal landscape of clean whites and stark reds, very Mirror’s Edge-like. Maya is accompanied by a floating cube-like robot called CPQ, which can help her fly around to new destinations in this dream world, but also acts as the key to unlocking and solving Ever Forward’s various puzzles. 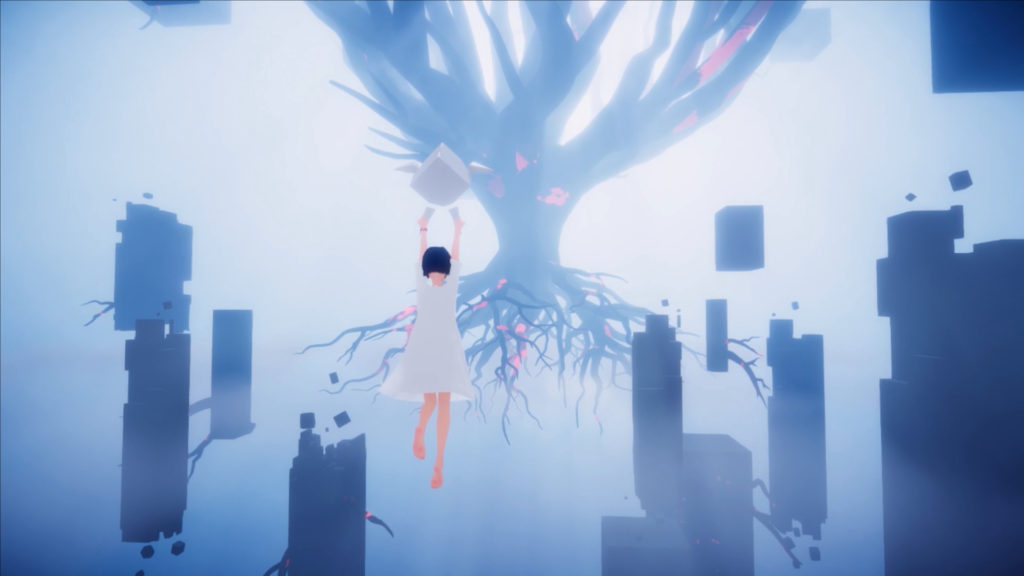 Each puzzle can be boiled down to a simple premise: get a cube to the end of the puzzle area. Of course, it’s never as simple as it sounds, thanks to the aforementioned murderbots. Roundybots, as they are so cutely known. Not that that makes it any cuter when they zap poor Maya, disintegrating her. Roundybots are little spheres with a bright, blue light emanating from an eye-like spotlight, which essentially lets you know where not to go. These Portal-looking things will instantly zap anything they see or hear, which brings me neatly to the stealth part of Ever Forward’s puzzles.

The Roundybots are particularly sensitive to sound, so Maya automatically begins creeping once she gets within a certain radius of them. Thankfully they don’t move around, but if you jump, or throw a cube, their murderbot vision turns red and they turn to face the sound. When they’re in this mode, their cone of vision is extended, as is their hearing radius. This all needs to be taken into account as you try to make your way through each puzzle, as you can trick the Roundybots into looking the wrong way as you sneak by.

As simple as the puzzles are in theory, this doesn’t mean they’re easy. Far from it, actually. Some are quite cruel, to the point that Ever Forward’s name becomes quite ironic. Most of the puzzles can be solved with a little patience and logical thinking, many even having multiple solutions, but for every two that I solved without too many problems, there was one that would completely stop me in my tracks. It feels a little harsh, as the game barely introduces a new idea before it then turns it on its head and just says, “deal with it.” These spikes happen a fair few times during the relatively short length of Ever Forward, pulling you out of its intriguing story a little too often. 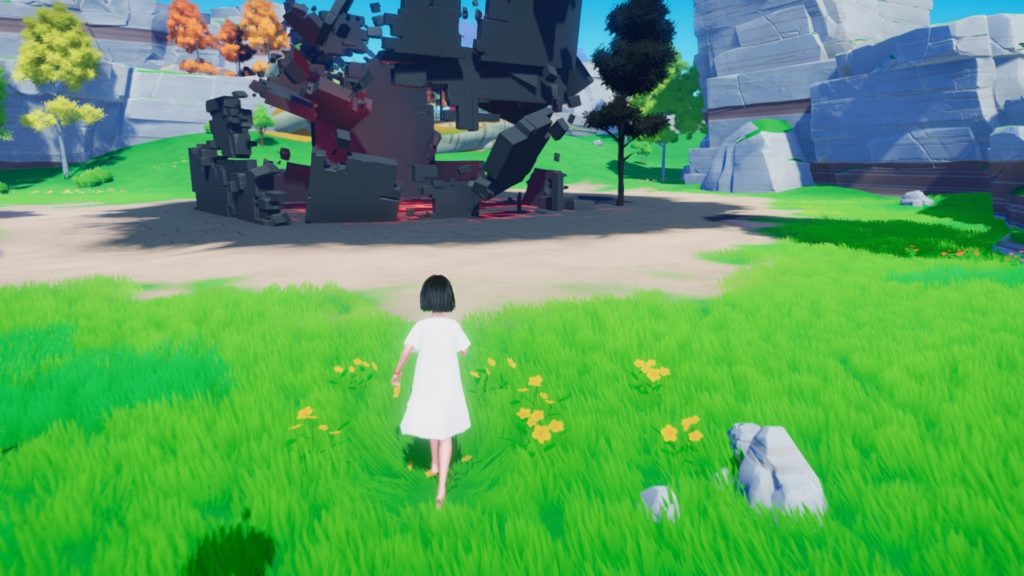 Solving each puzzle offers a glimpse of a memory, each one slowly filling in the gaps as Maya’s story unfolds. It packs a surprising amount of emotion into some moments, which is why it’s such a shame when you hit a difficulty spike during urgent scenes and you’re forced to wait far too long for the next story beat. It’s like a movie that needs editing.

Ever Forward is a beautiful game though, with a striking visual style and some intelligent puzzles that will have you scratching your head. However, its tip system simply isn’t helpful and there isn’t much guidance beyond the basics, not quite preparing you for some of the toughest puzzles. This stops it from completely fulfilling its potential, but doesn’t stop Ever Forward from being an interesting and challenging puzzler.

Ever Forward is a strikingly beautiful game with interesting and challenging puzzles, but harsh difficulty spikes make it a little more frustrating than it should be.