The Flame in the Flood: Complete Edition Review 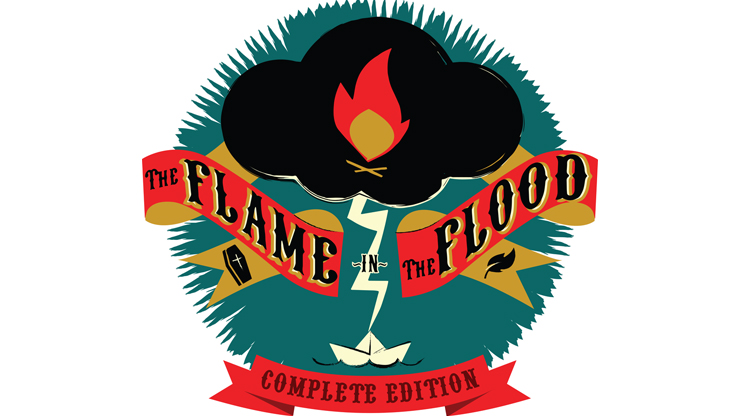 I was three days into my very first exhibition and all was going rather well. I had ample supplies, enough food to keep me full, water to keep me hydrated and firewood to keep me warm. The world might be engulfed in a cataclysmic flood, but who am I to complain? I’m sailing down the endless river at a pleasant pace, with the warm sun on my back and soothing harmonica music to keep the time passing. Things could certainly be worse, as I soon discovered.

I stopped off on a nice enough looking chunk of rock that jutted out from the river, in the hope of finding something new and interesting to aid me, and you can never have enough scran. All I found was one fat and thoroughly angry boar who charged at me with reckless fury and within moments, two of my bones were shattered. I tried sleeping in a long abandoned school bus, but when I awoke, the beast was waiting–he cut me open and broke yet more of my fragile bones. Running, sweating, bleeding, I ran for my raft and managed to escape. But it was of little use. I was on Death’s door: famished, parched, bleeding and broken, I died on that raft of starvation and no doubt the crows picked at my skin as if I was a floating buffet. The first thing you need to know about The Flame in the Flood is that it is a brutally hard rogue-like survival game. Nature takes no prisoners–she will throw everything she has at you and batter you into oblivion. She can slowly starve you to death, smash your raft in the white water rapids or combine all of her skills and smack you with the lot in one cruel blow. You control Scout, a girl who is joined by a cute dog called Aesop, who together must drift down the river on a ramshackle raft to find salvation at the other end. It’s not as easy as just staying on the raft though, as depleting hunger, thirst, temperature and rest meters will force you to dock at one of the various locations in order to gather supplies, craft, sleep, eat, warm up, meet quirky strangers and then escape again without dying. The fact that Scout is defenceless against the animals that want to eat her only adds to the dread and urgency.

On one of my better runs, my current record in fact, I had travelled over twelve miles and had managed to craft tools and clothing quite quickly. But everything can turn in an instant. Scout  was beginning to get hungry and was in need of some rest, but every time I stopped at an island to try and get some, there was a boar or a big bad wolf there to scare me away. Things got worse and I got desperate–in one last ditch effort I docked at an island and frantically searched for somewhere to sleep when, out of nowhere, a snake bit me. Injured, poisoned, tired and hungry I ran to a nearby building to discover it was only a gas station and I couldn’t take shelter there. Then, out of the shadows, I was surrounded by three ravenous wolves. No means of escape, no energy left to run, they circled me slowly and then pounced. They played with their food–allowed me to defyingly crawl a few feet before leaping again and killing me off. It’s very compelling, and I think I find it so because the deaths in Flame in the Flood feel powerful and sad. It’s never really your fault that Scout has died, and now Aesop, the lovely wee dog, is left to fend on his own–it’s just that the world has conspired against you. It’s out of your hands, which should be frustrating, but somehow it works. It might just be because it’s a quiet apocalypse: a game set at the end of humanity that isn’t ridden with zombies or invading aliens. It’s the end of humanity, not the world.

The way that the checkpoint system works also links to the game’s messages on human nature and our will to survive. If you’ve done a decent enough run, chances are that you passed a checkpoint, and if you die you can start again from that spot in the same condition you were when you first passed it. But, if upon death, you get frustrated and turn off the game in a huff (which I did do at least once) the checkpoints will be deleted and you’ll have to start from the beginning, with randomly generated starting equipment and river. So if you give it just one more go and fight on you can work on what you’ve built, but if you give up then all the work you’ve done was for naught.

It also has to be said that the sensational folk-country soundtrack from Chuck Ragan propels The Flame in the Flood to far greater heights. Be it an upbeat electric guitar tune, a slow sombre number with haunting harmonicas or even The Flame in the Flood theme song, the soundtrack is simply stunning. It fits the deep South setting perfectly and creates an atmosphere, along with the diegetic sounds of rolling thunder and howling wolves which really helped immerse me fully. There were a couple of drawbacks that did cause some minor annoyances at times. My biggest gripe is that that the ‘Supplies’ section of the menu is quite fiddly to navigate and it doesn’t allow the player to swap an item from, say, Aesop’s bag to Scout’s rucksack if there isn’t any room left in either. It can lead to a bit of faffing with moving discarding items to only go and pick them up again later, which can be frustrating as the game doesn’t pause when in the menu and it wastes time and leaves Scout exposed. Not to mention that the inventory fills up quickly. Elsewhere, the steering of the raft can be quite slow and unresponsive at times, and the newly added developer’s commentary is presented in an intrusive way with big cassette tapes appearing in the world (thankfully it can be turned off in the options). I also feel that your canine companion could be more useful in finding supplies and warning of danger, but hey ho.

Regardless of these complaints, I still found The Flame in the Flood real fun to play. I’ve haven’t played many other games that make me go from chilled out and happy to brimming with dread so quickly before. The one more go factor and the brilliant soundtrack all make The Flame in the Flood an apocalypse you should be dying to experience.

The Flame in the Flood is a quiet apocalypse in which it’s Mother Nature you have to fight, not aliens or zombies. The goal is to drift down a river in a flooded world to reach salvation at the end. Surviving is no walk in the park, but with Chuck Ragan’s brilliant soundtrack to soothe you, it’s sure worth a try.