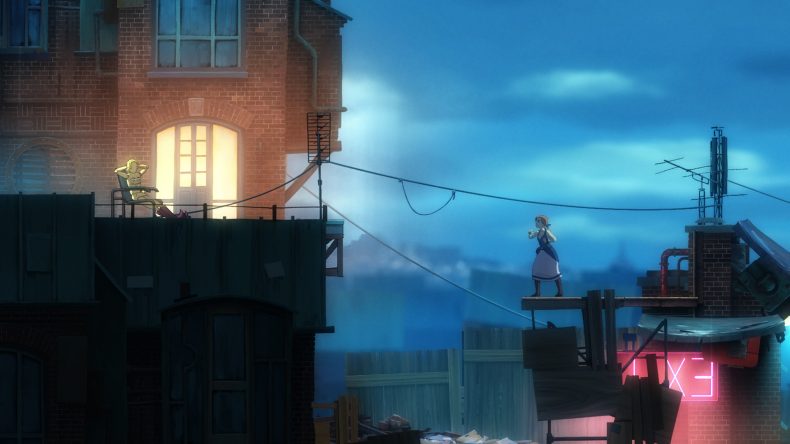 Forgotton Anne is a beguiling game, a 2D adventure game with light puzzling and platforming, and branching narrative choices. It features gorgeous, hand-painted, Ghibli-esque animation, a cast of delightful characters, and an exceptional soundtrack performed by the Copenhagen Philharmonic Orchestra. Don’t let the prettiness of it all deceive you though, this is dark tale with a deeply unpleasant underbelly despite the jaunty world of the Forgotten Lands.

You play as Anne, a young woman in a land of forgotten things. Ever wondered where that missing sock went, or the cute Nokia 8210 you had back in the day disappeared to after you shoved to the back of a drawer? Well it fell through to the Forgotten Lands got sprinkled with magic and now can talk. Things aren’t all happily ever after in the Forgotten Lands though, work is being undertaken by the industrious forgotlings to build an “Ether Bridge” back to the real world so that they can be reunited with their owners. Our story begins with Anne being awoken in the middle of a rainy night to the sound of explosions. Something has happened, and it is likely to have been “the rebels” that have done it, trying to disrupt the construction of the Ether Bridge, no doubt. Things in the Forgotten Lands are run on a source called anima and Anne can control it through a glove-type contraption called “The Arca”. Once that is full, Anne can manipulate switches to disrupt or re-route the flow of ether to power systems and even use it to engage a set of mechanical wings that allow her to leap higher and jump farther. Anne can also use her Arca to fill empty power sources to start machinery that lies dormant, or turn on lights and open doors. She can also use it as a weapon.

The very first moments of Forgotton Anne have you confronting an anthropomorphic scarf. It appears frightened and desperate and is clearly one of the rebels that have been disrupting the bridge construction. Your first decision is whether to “distill” this traitorous scarf or not. Distilling seems innocuous and the decision is made casually, but the process is that of literally pulling the life-source out of it and into your Arca. I did it, without understanding the implications.

The Forgotten Lands are full of the forgotten objects of the human world, all imbued with life via the anima. Anne is one of only two humans who live there, the other is a grandfatherly type figure called Master Bonku. He is the overseer of the project to build the ether bridge back to the real world and the craftsman behind the creation of Anne’s Arca tool, he is also the creator of a series of huge mirror type devices through which he communicates with Anne, however it soon becomes apparent that the mirrors are surveillance devices and Anne, who has the title “The Enforcer”, is his instrument. Forgotton Anne is about the titular character’s investigation and capture of the rebels, led by a charismatic posing doll called Fig. The game sees you travelling across the industrial Forgotten Lands, solving puzzles utilising your Arca and unravelling the mysteries that abound in the land. The animation style lends itself to a light-hearted investigative story, but the themes involved are deeply troubling. The Forgotten Lands are fuelled by the labour and sacrifice of the inhabitants: behave like a good citizen and you will be validated and get your ticket over the Ether Bridge and you will no longer be forgotten, step out of line and you will be sent to the factory to work forever or, worse still, be distilled and have the life force sucked out of you. Anne naively goes along with this, perhaps because she doesn’t know different, or perhaps she does.

Forgotton Anne is narratively heavy with several sections where a clear decision must be made, and the reveals where the significance of those choices are made feel like what you decided to do has meaning and impact. There is a great deal of dialogue between the characters and each one is wonderfully voiced with a variety of characteristics. A particular highlight is the Police Commissioner called Magnum, who is, you guessed it, a Magnum pistol. Lengthy dialogue scenes take some time to get through and often stutter making the game frustrating to play at times. This is further compounded by the movement of Anne which isn’t as fluid as it could be. Performing jumps and grabs onto ledges above require her to be positioned exactly right, similarly making longer leaps through the use of her anima powered wings are a slightly too long process of unfurling them then making the jump. The latter stages of the game see you giving chase across the rooftops and through a factory with a heavy focus on platforming. While none of the actual moves are difficult to achieve, the execution can be frustratingly slow, particularly if you miss a jump and have to position Anne precisely, suffer an overly long animation while she readjusts, jump, then wait agonisingly as she pulls herself up onto the ledge. Everything just feels like it takes a fraction of a second too long. Then there are the moments where it isn’t clear what you must do next. Do you need to interact with an object? Which direction should you be heading in? Have you missed something that is preventing your progress? More often than not when I found myself in this situation it was because I hadn’t positioned Anne in quite the right place to trigger a dialogue with another character. It is a shame because otherwise the game is exceptionally delivered, but the ponderous pace of it at times takes some of the shine off.

Forgotton Anne is a wonderful, surprising game that tells a story that feels oddly prescient. It presents an image of beauty and fun with the gorgeous animation and cast of colourful and amusing characters. Anne is a plucky protagonist, determined to do the right thing and uphold the peace, but the dark, dystopian vibe that underpins it all is unsettling. It is a shame that some minor technical issues and some design decisions spoil the experience somewhat, but if you can look past these minor flaws you will find a game that manages to disarm you into making innocent decisions that will devastatingly come back to haunt you.

Gameplay is a bit stuttery at times.
A few technical issues

A gorgeous 2D adventure game with light puzzles, platforming and branching narrative choices. Some design decisions slow the pace down negatively, but the story and the reveal of your decisions have devastating impact.