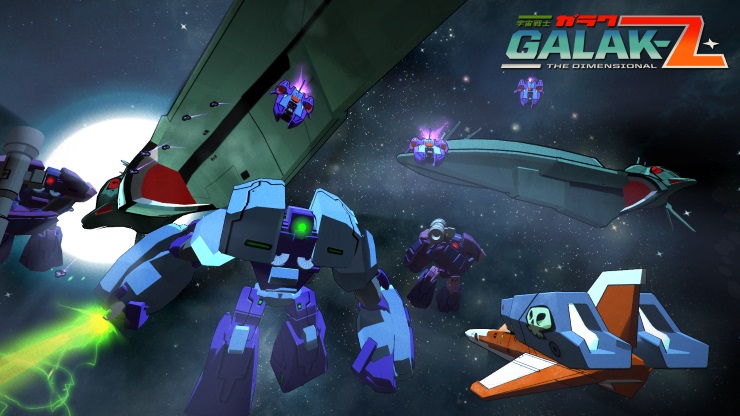 I’ve been putting off writing this review for a few weeks now (Ed: We had to threaten to not let him play MGSV), because – and this will become very, very evident as this review goes on – Galak-Z is the most frustrating game I have ever played. Just thinking about it is enough to have me shaking with rage. It’s so punishing, so unfair, so… wait: I’m getting ahead of myself.

A 2D rogue-like, Galak-Z pits you as one of the only survivors of a space ambush. Teaming up with the remainder of your fleet, you’re tasked with battling your way across procedurally-generated maps, fighting off space pirates and aliens as you search for other survivors or supplies. Zipping across the levels in your little fighter is great fun. Forward and back are mapped to the triggers, while the right stick controls which direction you face. You also have lasers and rockets at your disposal; the former being heavily upgradable as you make your way through the “Seasons” into which Galak-Z is split.

So far, so standard 2D space shooter – not that this is a bad thing. Your craft handles pretty well, with a cool “jump” feature that allows you to dodge towards the screen to evade enemy fire. Unfortunately, the strafe button doesn’t work half as well, moving you around the point you are focusing on with the right stick, more often than not slamming you into walls, pinning you in place for the enemies you were trying to avoid. While this is the cause of many of my deaths in Galak-Z, the alternative is to clumsily try and hold yourself in place with taps of L2 and R2, which doesn’t work any better. Dying when it isn’t your fault is the… no sorry, two seconds, *puts on Taylor Swift*. Right, the elephant in the review. I have no problem with hard games. When you die in the Spelunkys or the Dark Souls of this world, you know that it was your fault. Even early on, where you really didn’t know any better, death teaches you something valuable about the enemy or trial you were facing, a sliver of usefulness that means the time to the last checkpoint never feels wasted. If you can’t tell where I’m going with this, Galak-Z fucks you roundly and repeatedly in death.

First up are the deaths themselves. As the levels are procedurally-generated, so are the enemy placements. More than one of the medium class ships means serious trouble for you, an issue compounded by the tight confines of the giant asteroids you often find yourself within and the clumsy controls. Your little ship is able to deal quite a lot of damage, especially when upgraded, but it can’t really take that much. Two rechargeable shield bars sit over four hull points, meaning a protracted battle is not really an option, even less so when you consider your enemies have the same rechargeable shields. Winning and losing relies largely on luck, and chances are you’ll end the level with very little health. This causes serious problems later on, as in-between levels you only get the chance to repair one block of health. It’s an absolute joke, meaning… no, hang on, *pours a large measure of whiskey*. Starting a level with next to no health is annoying, but the punishment for death in Galak-Z is absurd. It’s split into several seasons of five episodes, and dying in a season means going back to the start of it, losing all of your upgrades in the process. Now, episodes take between five and ten minutes to be fair, but they get harder as they go on, so there’s a good chance a death will cost you 25 minutes of progression. It’s a massive hit, and when the final boss of a season ganks you for the umpteenth time you start to wonder why you’re playing, because it certainly isn’t for fun.

For balance there are Crash Coins you can collect in missions, enough of which allow you to restart the mission you died on, sans all of your upgrades (these are stashed somewhere in the level), essentially kicking you back into the ring, against the guy who just knocked you out, wearing mittens. It’s a stupid design decision, and while they can be used to buy some equipment if you allow yourself to go back to the start of the season instead, it still grates. And this is a massive shame, as Galak-Z has the potential to be a great game. At the end of the second season your ship turns out to be a transformer, switching into a mech at the touch of a button. Armed with a laser sword, an extra shield and the ability to grab enemy ships and smash them into asteroids, it should add to the fun. Instead, it’s still hampered by clumsy controls and ridiculous difficultly spikes. The entire game is wrapped in an excellent anime style though, which looks so, so cool.

If the frequent deaths had some sort of point it might be possible to stomach the horrendous punishment that they become, but they don’t. For all the positives, a game that you want to uninstall every time you die just isn’t good, and for that reason Galak-Z isn’t worth your time.

Now excuse me while I go and burn my PS4.

For all the positives, a game you want to uninstall every time you die just isn’t good, and for that reason Galak-Z isn’t worth your time.