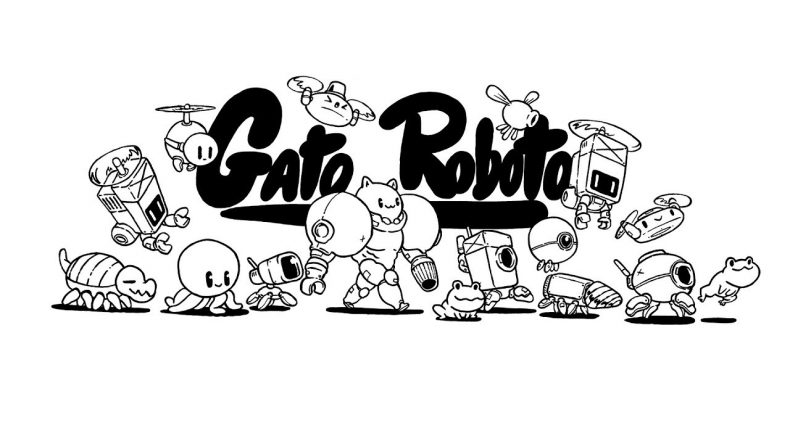 Say it out loud and try not to shudder. It’s one of those puns that’s so bad it causes an involuntary cringe to appear across your face. But placing itself firmly in this niche genre is Gato Roboto, and annoyingly, it’s hard to argue against the description. Well, aside from the superfluous “vania” part as this is as close to a Metroid game as one can get without a cameo from Miss Aran herself. She is replaced by a cat instead. Yes, I know, but bear with me, it’s actually nowhere near as bad as it sounds.

The first thing to acknowledge, and accept, is that Gato Roboto is neither as good nor as involved as any of the 2D Metroid series. A playthrough (even a first one) can be done in under three hours fairly easily. And it unashamedly borrows a lot of its ideas straight from Nintendo’s franchise right down to the curved doors opening upon shooting, the missile upgrade, and even a spin jump attack. Even the opening story is a ship answering a distress call from a strange source, which is literally Metroid 101. Where things are different is, well, the cat. Our kitty hero locates the Gato Roboto fairly early on, which for all intents and purposes is their version of the Varia Suit. With it, a harmless cat can take damage, and more importantly dish it out in the form of satisfying firepower. The main difference to how this affects gameplay compared to what has gone before is that often you are required to leave the suit behind for certain sections. Because whilst being vulnerable to attack, our feline hero can climb walls and into narrow corridors that a bulky robot suit cannot. It can also swim, whereas the Gato Roboto is not waterproof.

This actually opens up a different set of options than you’re used to in a Metroid game, in a good way, as traversal isn’t as simple as plowing through rooms in your suit, killing everything in sight. What also deserves a doff of the cap is the way in which the game cleverly alters the landscape, at certain points to mix up how you get around. Water-filled areas might be drained, giving access to the Gato Roboto, or lava might cool and solidify, opening up new areas. And its when you see both these old and new area versions working equally well independently that you appreciate the standard of design on display.

In terms of pace, the game feels quicker than others in the genre, with more emphasis placed on quick manoeuvrability, which goes some way to shortening the overall time you’ll need to complete the game. But it’s also deceptive because of the number of rooms you’ll be exploring and clearing before progressing, the game feels a lot longer than it actually is. The ever-present timer at the bottom of the screen accurately depicts the march of time but often grounds your reality of how much time has passed. You’ll feel you’ve achieved a lot, and be quite surprised at the short time in which you’ve done it. The hallmark of the metroidvania genre is that of exploration, discovery, and ultimately backtracking to previous areas now a new ability will help you pass a hitherto inaccessible section. Gato Roboto sadly lacks in this area, with most of your progress being incredibly linear exploration, finding mostly what you need en route. There’s minimal backtracking, and certainly no requirement to retread old ground in previous areas. And that’s a shame because part of the appeal of the genre is to find obstacles, and recall them and return to them when needed, whereas this feels more like a monochrome breadcrumb trail that you’re following.

If you do plump for a bit of optional backtracking, you’ll find bonuses in the form of health kits which increase the damage you can take before death. There’s also cassettes which you can find that give that almost over-used reward in indie games; the new colour palette. And to be clear, what we always mean by that is a two-tone palette to replace the black and white design we’ve given you as a starting point. I understand that indie titles lack budget sometimes and priorities need to be made, but I feel those types of rewards work better in arcade type games, not what should be adventure titles. I don’t see why different areas in the game couldn’t have adopted different palettes to simply differentiate themselves and create a feeling of changing environments. Sadly with it all looking the same, some of the diversity in the levels is lost.

In terms of challenge, the game is fairly simple, especially as you’ll likely know what to expect. However, the boss battles, often against an unruly rat (just go with it), can be surprisingly frantic and take a few goes to get a feel for their rhythm. None feel unfair or overly harsh, and often provide a refreshing change to the sometimes repetitive nature of speedingly clearing rooms of enemies. Save stations are scattered across the map as well, meaning backtracking if you do die doesn’t require much effort, or instill frustration. Despite cowering under a very significant and obvious shadow, created by it’s unabashed homage to the genre, Gato Roboto manages to stand on its own four feet. Sure the enjoyment of a Metroid game feels like it has been condensed to within an inch of its life, and the grandeur of such an adventure is sorely missing. But it also has its own flourishes which shouldn’t be underestimated, both in terms of clever level design and varied boss battles. By also bringing the element of exiting the suit and becoming a vulnerable cat, it brings a sense of fragility and nervousness far removed from the usual bounty hunter experience.

Gato Roboto is a short, sharp burst of Metroid fun, with cats. It sounds daft, but strong level design and a few original tweaks make it well worth a look.