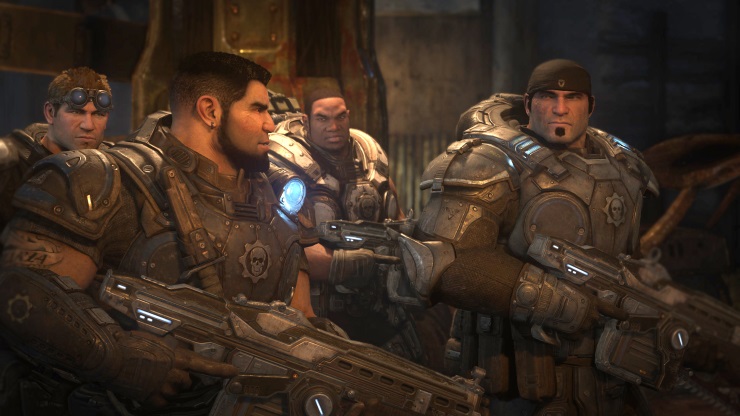 There’s probably a high chance that when you clicked this review, you already knew who had written it. I’m a fan of the series (though Judgment was pushing its luck), and it’s important that I tell you that because there are two types of people interesting in the latest HD re-release from Microsoft: firstly, the fans, coming back gagging for more Gears – only on their shiny new(ish) Xbox One. Secondly, there’re the people who have never played Gears before, perhaps they were PlayStation owners last gen, or were too young.

You probably didn’t realise this, but Gears of War is nearly ten years old. And have you seen video games nowadays? They look bloody great. After a stellar visual reworking of the entire Halo collection (regardless of launch issues, the games looked aesthetically pleasing), it’s worth nothing there are many parallels to draw between the two games. Not least the age issue, but also the fact that neither are made by the original developer. Where 343 industries has taken the mantle from Bungie, here, The Coalition is having a crack at Epic’s seminal work. Thankfully, it’s done a great job. The biggest changes are to the visuals. Even five years is a long time in the world of videogames, and some games age better than others. The original Gears was brilliant, and revolutionary by hook of creating a genre of copycats that never quite equaled it – but it did have issues. The frame-rate would chug at times, and although back then it looked pretty great, it hasn’t aged well. Ultimate Edition is a proper remaster, with assets retouched and redrawn to make it look like a modern game. The core story of Marcus Fenix and Delta Squad trying to fight back against the Locust uprising is the same, but many of the levels feel like strolling down memory lane (some forgotten moments suddenly remembered), only without the need for rose-tinted glasses; this looks better, even if some of the changes are more artistic than anything else.

There are still moments where the frame-rate struggles a tiny bit, however. It never chugs as such, and it is most noticeable during the third act with the lambent wretches. It’s a pity that the campaign tops out at 30fps, with the multiplayer being 60fps. You’d assume that’s purely because most people will play the multiplayer more as time goes on, but if you’re calling your game the “Ultimate Edition” on your latest console, I don’t think it’s unfair to expect 1080/60 across the board. Even with the few bonus extras (there’s some unlockable comics you can read) it still sticks in your craw a little that it’s not as smooth as it perhaps should be during the campaign. For newcomers, the game will look decent if not spectacular, but for returning fans there’s a clear upgrade here, and playing through the campaign again it’s remarkable how fresh it all feels. Perhaps it’s a mark of how safe shooters are these days, or just how dominated by the first-person viewpoint the market is, but Gears of War still feels brilliant. Helping that feel is the fact that, although this is the first Gears of War, it actually feels closer to Gears of War 3. You can roadie run instantly in any direction (originally you had to be facing that way to do it, here you can hold “down and A” and you’ll turn on a sixpence and run away), and there are achievement tickers appearing as you play, giving a constant sense of progression.

Speaking of achievements, most of the original ones are here, including the complete bastard “Seriously” 10,000 kills one. There’s a few extra ones that came from the time that King of the Hill was added, so there’s plenty of reason to go through all modes on offer. That multiplayer, though, still feels sensational. Dedicated servers remove the biggest argument-maker from the original (host shotgun advantage was king nine years ago), but the biggest thing to take away from Ultimate Edition is just how fun it feels. Jumping into cover, using the Hammerburst to kill all the Lancer-fans with its powerful burst fire, blind firing that terrific-feeling shotgun up close and watching your opponent explode into a dark red cloud of viscera and grey matter – it’s all compelling and so quintessentially moreish and playable. There’s something about the weight and pace that always appealed to me. You don’t need lightning fast reactions as you might in Call of Duty, and the weapon diversity is such that there’s something for everyone. Ultimate Edition takes it all back to the core of the series, before it became encumbered with so many weapons, but with a huge amount of maps. Again, that Gears 3 take on the original multiplayer means it feels great. It’s only a shame that The Coalition didn’t include a horde mode, as there are modes that weren’t originally there, like a 2v2 mode which has the new map “Boxes” designed for it (it’s a tiny, close-quarters, shotgun-only map), as well as the additional single player levels from the PC version, which adds just shy of an hour to the campaign.

But this is a visual upgrade on a classic, and the multiplayer remaining so strong means there’s every reason for fans and newcomers to enjoy this package. Ultimate Edition reminds us of why Gears of War is so beloved, wetting the appetite for whatever Gears 4 ends up being, but also giving people a chance to rediscover (or indeed, discover for the first time) that first foray that changed the face of third-person shooters. It’s taken a long while, but Gears is finally on Xbox One, and I’m going to be glued to that multiplayer all over again.

A few frame-rate issues.
Horde mode would have been nice.

A genuine visual upgrade and the multiplayer being 60fps means there's every reason for fans and newcomers to enjoy this package. Ultimate Edition reminds us of why Gears of War is so beloved.