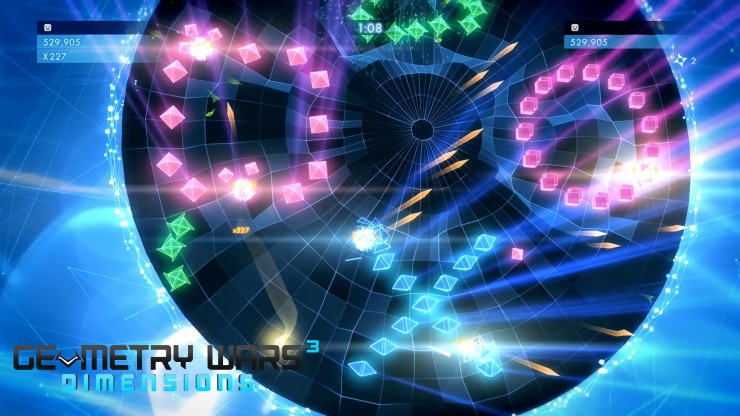 Age has not been kind to me. I didn’t even realise it, actually, so I’d like to take this opportunity to thank Lucid Games and Sierra a bunch for making me realise I’m not the spry youngster with lightning-quick reactions I once was. So yeah, cheers for that. Well, it’s either that, or Geometry Wars 3 is a lot tougher than the previous games. Or, yeah, I guess my excitement got the better of me.

But let’s think about that for a moment, because that’s a really important thing to remember: I (and many others, I’d wager) are excited for a new game in a series that started out life as a bonus for Project Gotham Racing 2. In fact, let’s not think about that, because we don’t want to start dwelling on what is, was, or could have been for that series, either.

A quick catch up, then. Geometry Wars is a series based on arcade perfection. Slick, vibrant visuals that sparkle as much as they purposefully dazzle, mixed with tight controls, score-attack gameplay that eventually evolved (see what I did there?) into a leaderboard chasing alleyway with a violent dead end, save for the most skilled to brag about. It kickstarted a twin-stick shooter revolution, spawned one of the best sequels I’ve ever played, and then disappeared along with the developers, after the (under-rated, actually) arcade-racer, Blur. With me? Good. Dimensions’ biggest new addition right out of the gate is a fifty-level campaign. And unfortunately, it’s not the best part of the game. While the idea behind the levels is a superb one, you’ll be forced to get three stars on each to unlock further levels as you progress. The masochistic among you will love this, because it’s brutally hard, and I often found it difficult to even get two stars, let alone three. Levels are different 3D shapes and sizes (and take place in different game modes), causing tactics you held dear for years to be undone. The cylindrical nature of some will mean bullets fly round corners, but also that enemies will warp in from nowhere, causing myriad frustrating deaths and repeat plays of earlier levels.

There are bosses now, as well, which is an interesting idea. Often, the actual bosses aren’t the hard part, and the trick is to keep them alive while you kill the smaller enemies to raise your score. It gets beyond hectic eventually, and since you only have one life, a decision will need to be made. You’ll also unlock additional supers and drone options that you can use as you make your way through the campaign. This is a major new addition, too. The first you’ll unlock is a little drone that shoots in the direction you shoot, but you’ll also be able to unlock a drone that collects geoms (enemies drop these score multiplier boosts), or a mine-super that helps you out a little bit. You can never rely on them, because they are helpers, not game changers. Interestingly, some of them appear to make earlier levels easier, so you’ll have to replay campaign levels to progress. Honestly though, the campaign can go from fun to a grind within minutes. As a reintroduction to the game, it works well enough, and you’ll definitely have a good go at it to begin with. It even seems like a good idea at points, making Dimensions less a case of “here’s more Geometry Wars”, and instead “at least we had an idea to put forward”. But most people will quickly jump back to Classic Mode, even though there are leaderboard hooks in these new levels to keep you coming back occasionally.

This contains all the brilliant modes from Geometry Wars 2, including the fantastically frustrating (in a good way – if you’ve played it, you’ll know) pacifism mode. Here, you cannot shoot, and must avoid enemies for as long as possible. You’ve got one smart bomb (they wipe the screen clear), and must kill enemies by going through gates near them.

Classic mode is where the real fun lies, and curiously, it’s sure to be the meat of the game. Geometry Wars 2 was a nigh-on perfect arcade shooter, and that is basically classic mode, replicated in Geo Wars 3. Here, however, you don’t get to see the interesting new geometry (there’s another for you) of the campaign levels, but it’s still a headache inducing leaderboard chase. Rounding things off are a competitive multiplayer mode (which was hard to test, because even though the game is available now, nobody is playing it) which seems a nice distraction, and a superb co-op mode. It’s a shame that it’s local co-op only, because up to four players working together toward an overall score, sharing their smart bombs – well, it’s a recipe for a huge amount of fun.

Geometry Wars 3 is the definition of a game made to last. Highly replayable, if it catches on as its predecessors did we’ll all be attacking each other’s scores for months to come. There’s enough here to warrant a new game, and it gets the core principles absolutely spot on. That said, the mediocre campaign dulls the overall impact of the package, though conversely the superb visuals and terrific soundtrack make sure that not all is lost. This is Geometry Wars, when all is said and done, and those that have loved previous games will find plenty to adore here. Newcomers, on the other hand, well they’d better bring a spare pair of pants.

Campaign is too much of a grind.
Very difficult.
Those green enemies are pricks.

This really is "more Geometry Wars", but it's been quite some time since we've had a new game. The campaign level design offers something new, but the classic mode is where it's really at.