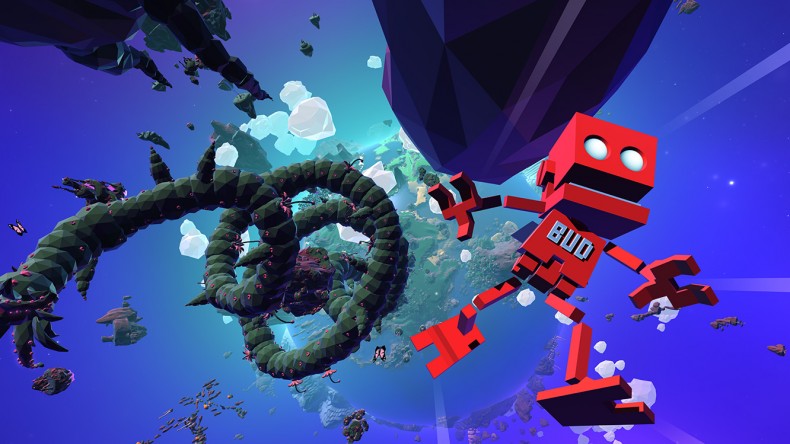 There’s something endearing about Grow Up and it’s protagonist, BUD. This little red bag of bolts encompasses the childhood wonderment of exploring, imagining, and seeing the world in a more positive light. It feels like you’re back as a toddler on your way to a theme park, or the beach – everything is new, different and awe-inspiring. Seeing all of Grow Up’s small but comforting open world through BUD’s glowing blue eyes is like seeing things for the first time and the joy of playing the follow up to 2015’s surprise hit Grow Home never gets dull. Strip away the cynicism, stress, and all the other baggage of getting old and be a kid again.

As BUD, you’ve crashed onto a planet after flying straight into an asteroid field in your ship. There’s not much more to it than that, and there doesn’t really need to be, because the focus is on enjoying your surroundings and playing around with different abilities and plant life to do so. The aim is to collect all of your ship parts if you want to finish the game, but there’s no real urgency to do so. You’ll find yourself enjoying the different biomes and scenery rather than trying to get to the next piece of MOM. Movement can be cumbersome at times, but getting used to BUD’s slow and clumsy pace is part of the challenge. From the moment you crash, you’ll find it a bit of a pain getting from A to B, mainly because you don’t have any of the fantastic abilities to help you. As you explore the world you’ll find abilities located around and by opening little red pods, you’ll learn something new to help you on your way. It doesn’t take long until you’ve unlocked abilities like the glider and the ball to help you out, and you’ll be traversing the world with a much fancier swagger in your step. The same basic controls are back from Grow Home as well, having you climb everything by using the triggers to hang on for dear life.

You never get irritated by misplacing a step or overshooting a jump, but dodgy camera angles can be irksome. I lost count of the times I was gliding or bouncing and the camera zoomed in too much causing me to misplace a landing. There doesn’t seem to be any real reason for it to do this and the randomness of it happening occasionally tarnished the experience.

Throughout the world, you’ll find different plants to aid you and once scanned (by grabbing them and pressing square) they’ll upload into your Floradex 3000 – a bit like a Pokedex, but for flora. Each of the 24 plants you encounter have different properties and they can be used to get you across the map; some are pretty pointless and if you’re climbing one of the star plants (a giant plant with extendable shoots), these aren’t going to be used all that much. Plants like the flowering cactus and the wonderfully titled Trebouquet will help launch you into the air and give you a bit of distance, but overall it’s more about collecting them rather than using them. Another cool feature is your little flying buddy, POD. Not only does it share witty banter with you along the way, it also shows you where things are in the world. When you open up its map, you’ll be able to see where the nearest telerouter is (respawn points which can be unlocked), or how far away the next ship part is, proving quite useful when the game stops imbuing you with the same amount of guidance as it did in the beginning.

Your surroundings are beautifully designed and the bold, blocky colours add to the feeling of youth and growing up. And that’s just what Grow Up is: finding your feet, taking your baby steps and developing with every single step you take. It may not be a particularly long game, and other than the POD challenges, there’s not much else to do after reuniting with MOM, but it doesn’t matter. Grow Up is just as charming as its predecessor with a bit more substance and a little polish here and there.

A lesson in learning to appreciate what’s around you, while at the same time providing solid gameplay with a real sense of progression.