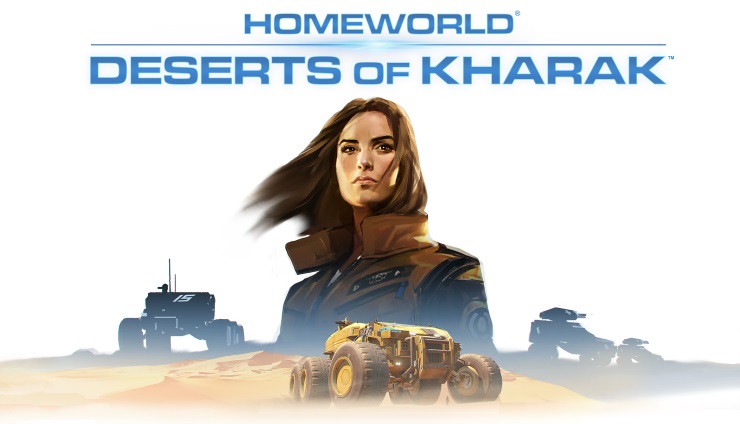 When THQ went bankrupt in 2013 people wondered just what would happen to many of their properties. One such IP was Homeworld, which THQ acquired from Sierra Entertainment in 2007. In a flurry of bidding for all THQ’s properties, Gearbox stepped in to grab the Homeworld franchise, and now we have the first installment from its new overlords.

In a departure for the series Deserts of Kharak takes place on land rather than in space, with you guiding round the Carrier Kapisi (your base of operations). You’ll need to gather resources build units for your fleet and drive out the Gaalsien forces occupying the planet of Kharak.

I admit, I’m not good at RTS games, I played Command and Conquer for quite a bit in the 90s, but never actually finished it. But after the initial tutorial and a couple of missions I was whizzing about the map directing my units to take out advancing forces while making sure my salvage teams are adequately protected from attacks on my blind side. Keeping tabs on everything is made all the more easier with the tactical view. Pressing the space bar zooms out to provide a blue overlay of the land and your forces, not to mention enemy units your fleet has spotted. From this view you can still highlight units and command them to deploy and attack before zooming back in to watch them carry out your orders. It all happens so fluidly and gives you a superb tactical advantage.

Another nice touch is that the game allows you to go from mission to mission with everything you accrued on the last one. So, if you have a full fleet with a tonne of resources for upgrades, then you can start off by improving your fleet right away. This is a double edged sword though, because it can lead to complacency with your upgrades, meaning you’ll spend resources willy-nilly and then be left with nothing to create fleet units. Not only that, but if you enter a mission with no resources and no scavengers to gather them then you’ll struggle to create new units. There are ways around this, but it can make things really tough at the start of a mission. Another annoyance is separating your fleet as you get more units. As they move from place to place they tend to clump up, and sometimes stack on top of one another making it difficult to separate them from each other quickly. It proves quite frustrating when things start going down and you have to deal with multiple threats from all angles, a calm head won’t be much help here.

Then there’s the fact that other than the nature of the missions the game is frightfully dull. Menus are functional but boring, voice actors deliver lines very straight and matter-of-factly and I often found myself tuning them out and waiting for the missions objectives to appear to know what I need to do. Then there’s the maps themselves: with the name Deserts of Kharak it should be no surprise that you’ll spend a lot of time staring at vast expanses of sand. There’ll be the odd ruined ship, or operating base, but you will be spending most of your time staring at a giant beach full of Micro Machines, it’s just so uninspiring to look at. This in turn makes the long loading times seem rather odd (and this is on an SSD Hybrid drive). Starting a game can leave you staring at a loading screen for the time it takes to make a brew. While it’s nice to have a cuppa you won’t want one between every mission, otherwise you’ll be to and from the loo on a regular basis. Not only that, but you could wind up missing a cut-scene if you’re not careful, as they’re interspersed between missions. No big deal, as they’re not the most interesting things, but they do have a lovely painterly look to them.

Despite being easy to get into and a great mission structure, Deserts of Kharak is a fiddly experience with a rather bland aesthetic. It’s great that fans of the series will see new titles being made, but it’ll hardly win over newcomers.

Easy to get into.
Lovely looking cut-scenes.

An interesting enough take on the genre that's let down by boring looks and frustrating little niggles.

You may also like
blackbird interactivehomeworld: deserts of kharak