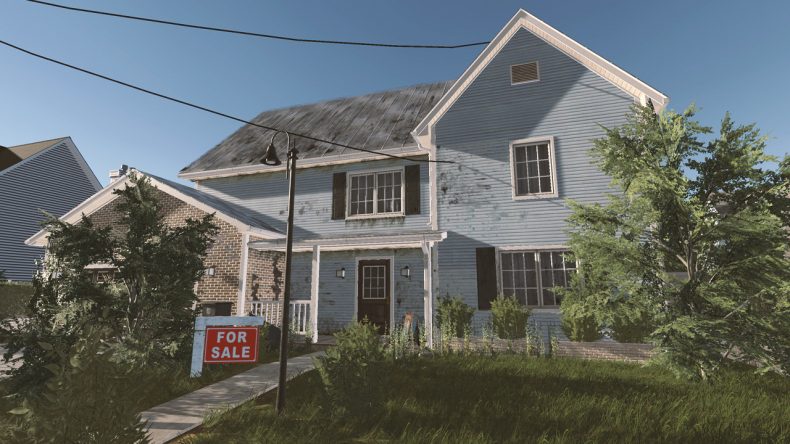 House Flipper is boring. The kind of boring that has you drifting off, not really focusing on anything in particular, your mind wandering as you fix radiators to walls and clean up other people’s mess. It’s also stupidly addictive and I cannot stop playing it.

For the uninitiated, House Flipper is a simulation game. One where you do odd jobs for clients to raise money so that you can purchase dilapidated houses to do up and sell for massive profit. It is equal parts awful and addictive. I also wonder if I have been playing it the wrong way, if that is even possible. I went straight to buying houses the minute I could, my desire to be some kind of landlord with a massive portfolio of houses driving out my desire to be known as the best “odd job man” around. By doing so I think I missed some essential tutorial work that the odd job stuff is disguised as. No matter, it seems that I really like painting walls and arranging furniture. Perhaps I have missed my calling?

You start with very little money. Your “office” is a essentially a shack that requires some sprucing up. You can’t do much in the beginning, you can clean up and move stuff around, but the more complicated stuff only comes to you as you progress through your list of jobs. Not that you need to spend much time in your shack come office, it is merely a location for you to pick up tasks and browse the housing market. Your laptop is your main way of obtaining work. You will receive emails from potential clients asking you to do odd jobs for them. The first has you cleaning up a bit and replacing a stolen radiator. Gradually you get more complex jobs: a lady wants her house repainting; a man has seen a neighbour knock down walls to create a more open space and he wants the same; another client wants their child to have their own bedroom so could you please erect a wall and buy some furniture. It is all straight-forward stuff, mind numbing stuff, but it is oddly compelling.

Performing tasks over and over will eventually award you skill points. You can use these to make your life a little more bearable. Clean up a certain amount of other people’s mess and you can spend your points on a better brush and a faster clean up rate. Paint enough walls and you can plump points in to using less paint or painting more than one section at a time. It is a neat way of increasing your stats and giving you a sense that you are improving in your work, after all it is only be doing a thing will you get better at it.

After a while you can start to play the housing market. Browsing via your laptop again there are a variety of houses that you can purchase and do up. This is where the game sort of breaks down a little. The houses available for sale range from around thirty thousand and go up from there. All of them need extensive work, the most obvious being tidying up mess, repainting walls and generally bringing the house back into some order. Doing these things will start to attract a clientele of potential buyers each with their own requirements for what they perceive to be an ideal home. You won’t know what these are though, merely getting periodical prompts popping up on one side of your screen. “I only need one bedroom”, or “there’s a kitchen and I don’t understand what I need it for”. It is a shame that these aren’t more obvious. There was a nice old couple that came to look at each one of the houses I was doing up and I wanted to be able to create a home that they would like, but there doesn’t seem to be a way that you can directly influence that, which I think is a missed opportunity. Instead, you can clean things up, perhaps knock a wall down or too and re-tile the bathroom, then add some radiators and fix the electrics. If you can be bothered you can even start to furnish the house, which I will admit I seemed to spend a long time doing. I am a frustrated interior designer it seems. It isn’t necessary that you go to this length though because you can put the house straight back into auction with you barely doing anything and see whether any of the prospective buyers are willing to offer you more than you paid for it. If they do, and you are satisfied with the profit you can sell the house and more onto the next one, or back to your list of odd jobs. Then repeat the process ad nauseam.

There is no denying that House Flipper has its appeal. I do think that the house renovations are a missed opportunity as the idea of attracting a specific client to purchase the property creates a more tangible goal to work towards than just “improving” it in the hopes someone will pay more for it than you did. It doesn’t look anything special, and has rudimentary functions, but it is addictive. Menus are slow to load, and there’s very little in terms of actual guidance. However, no matter how dull the tasks were, I was perfectly happy to do them. There is a catharsis in cleaning stuff up and returning something to some semblance of order that is compelling. House Flipper is nothing special, but it is relaxing and there is merit in that.

There is catharsis in tidying stuff up
Relaxing, mindless play

House Flipper is a simulation game where you purchase and do up houses to sell for profit to do it all over again. It is mindless and monotonous, but there is catharsis in cleaning things up and returning them to some semblance of order.