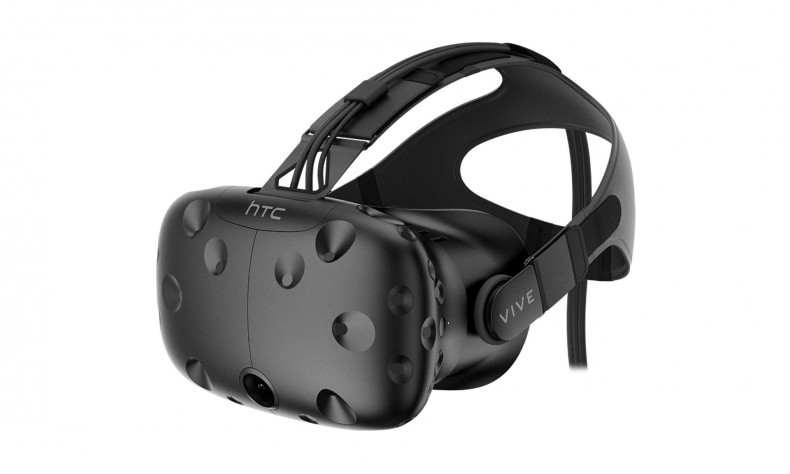 After untold hours, I’m sitting down trying to vocalise how I feel about the HTC Vive. I could tell so many tales about moments that blew my mind, but equally, I could share stories of frustration. It’s a strange device, but it’s also probably the best VR experience money can buy. So if you are the kind of person with the money to burn, the room to spare, and a PC that can handle it, that’s the short version of this review right there. But that’s not the whole story, and you’re probably going to need a cup of coffee before you go any further.

So cards on the table time, the Vive isn’t an easy thing to set up in most modern homes. I feel it’s important to note that NVIDIA loaned us a VR-ready laptop to play with the Vive that included a GTX 980 graphics chip. And that’s important because, although I am normally running an i7 with a NVIDIA 970, and 16GB RAM, something about the Vive didn’t like my PC. It should of run fine, and we got it working on Colm’s PC (with my 970 in it), but whether it was some chipset incompatibility, or the Frankenstein creation my gaming PC has become over the years, it didn’t like it. You should be fine, but I wasn’t — we still don’t know why. To be sure, we also borrowed an Alienware X51 which ran it smoothly too.

Out of the box, there’s a lot to do. Cables galore, at least three plugs will need to be powered (there are two more if you want to use them to charge your controllers, which is handy), and there’s an elephantine cable that will stretch from the break-out box to your headset, which will dangle down your back. Honestly, I never got comfortable with the cable, but most of the time the worst I’d complain about it was with a moderate “tsk” before I lost myself to another world – again. But you will need space. A lot of space. If you want to just do sitting-down VR, then you’ll be fine, but to experience what the Vive does that nobody else does, it’s room-scale VR. This requires at least a 2 meter square space to be comfortable, which meant setting it up in my lounge and moving the coffee table.

The important part of this is the base stations. Two small speaker-sized black boxes which both need powering and must sit at opposite ends of the room from one another. I’ve heard horror stories about these things needing to be gaffer taped to book cases, or hung from staircases, and honestly, I can understand and see why that’d happen, but the recommended height is something I got around by having one on a camera stand (around 6 foot high) and another about waist height on our already existing TV unit. I got lucky, maybe, but I had no tracking loss and could walk around any world a game threw at me. If you find the spot that works for you, obviously use wall mounts to secure the base stations and never move them again – though you will need to hide the cables. Oh and I’d suggest powering them down when you’re not using them, as they constant vibrate, which is probably for a technological reason, but a nightmare if you’re trying to balance them.

After you’ve got the base stations set up, the cables all plugged in, you’re pretty much ready to measure your room. This is a smooth process but one that I feel could be better. It involves a lot of going back and forth between the VR gear and the PC, clicking this, placing these there, and so on, but the good thing is that once it’s done, you shouldn’t have to do it again. Now you can play.

To call the Vive lineup a mixed bag would be an enormous understatement. While there weren’t flat out bad, there was only a few of the 30-40 strong library I played through that really stood out. Valve’s pack-in stands out at the top of the pack as one of the best all-round titles to show off the gaming possibilities in VR. The Lab might be free, but it’s something that genuinely shows the exciting potential of a virtual world. Ranging from archery (which is excellent fun) to controlling a spaceship with your hands, and dodging bullets, there’s loads to do. An interactive minigame with the Portal robots and GLaDOS herself is brilliant: you’ve never felt so threatened by her before, and even the minigame that lets you visit locations in the real world and explore with a mechanical dog friend (that chases sticks) is ace. Indeed, the feeling of standing on the precipice of a clifftop and looking down never fails to immerse you. The Lab is an excellent way to spend time with your Vive.

So too, is Job Simulator. Doing what it says on the tin, your play one of four roles (as a job) and have to serve customers. The idea of being a chef in a kitchen may sound boring in real life, but there’s something about how tactile all the interactions feel that make it strangely addictive. The Vive’s controllers instantly make you feel at home and natural in of the four jobs, but the kitchen and office worker ones have a place in my heart for how silly and entertaining they are. Fantastic Contraption is another title that makes you feel in complete control of the things you are touching. It’s a simple game of building with a few objects, but the goal of making something and having it move to a goal is enticing and rewarding.

These are room scale games, which is to say that if you are set up in a small room and can’t move around, you won’t be playing them. There are, of course, games that cater towards that, such as Adventure Time: Magic Man’s Head, a fun if unremarkable platform game that has your head tracking take the place of the game camera. This was actually the first time I had any form of motion sickness, although it was mild. I’d describe it as being similar to that of car sickness: you are moving, but you aren’t actually moving. It took a little while to get used to, and despite the game looking colourful and being fun in short bursts, the problem is that it doesn’t do very much to justify being a VR game.

And that’s a large problem, really. As someone who has played games all my life, there’s not a single game so far that I’d rather play than the ones on my PS4, PC, or Xbox One. They are very cool in some cases (like the aforementioned Fantastic Contraption, Job Simulator, The Lab), and make excellent use of the virtual world in others (Sisters, #SelfieTennis), but you really are an early adopter if you get involved now thanks to the game pricing.

Frankly, it’s all over the place, and when you look at a title like Final Approach, which is basically the iOS game Flight Controller turned into a VR game (that’s maybe a tad unfair, and I’m not intentionally singling that game out) and one that costs £18.99, whereas Adventure Time is only £3.99. It just doesn’t add up. Moreover, thanks to the early stage of the tech, you never really know what you’re going to be buying, nor playing. Some of the strangest game titles are around, and some are more experiences than games. Google’s Tilt Brush is a cool experience, and one that makes you feel like an artist, but it’s one that’ll cost you £22.99 to play. Sure, it’s nice to be able to draw in a 3D space, but it requires a lot of time and patience to become acclimatized to existing in those dimensions, and as much as you’ll want to show off your creations, it’s a solo experience because the 2D pictures you can save do it no justice. On top of that, it’s not a game, it’s a Virtual Reality experience.

It’s important to note that every piece of the HTC Vive is physically well made. The controllers are a stroke of genius, and instantly feel natural. As someone who wears glasses all the time, I was very worried that having a head mounted display (HMD) would be uncomfortable, and in truth, it’s only mildly so. During hot days, the thing made me sweat, but that’s not really the device’s fault. Generally speaking, it’s a heavy headset strapped to your face. I can’t describe to you how heavy it is, but the thick cabling that runs down your back, combined with the headset on your face, and the headphones on top can perhaps give you an idea of the fact you’ll be aware it’s there. That said, after the first few goes, the experiences absorb you and you do forget you are wearing it. My children often forgot they were even wearing it, and it was tremendous fun just watching people involved in their virtual world, completely unaware of how silly they look outside of it.

When all is said and done, outside of making the cables lighter somehow, or making the whole thing wireless (it’d probably be insanely expensive to do this), there’s not much more HTC could do. It does what it says it does, and is as comfortable as you can expect it to be. It maybe damning with feint praise, but I found little to complain about on the hardware side of things.

HTC Vive is a strange proposition. In the moment it can truly feel as though this is the future of gaming, but then you’ll remove the HMD and see the cables and boxes it takes to create this future, and you’ll wonder if it’s all worth it. It’s very expensive to get running, whether you’re running the GTX 980 powered laptop or an Alienware X51 we were, but the biggest obstacle thus far is the software. I’ve played untold hours inside the Vive’s world, and there are some incredible experiences to be had, but none of them hold you long enough, and they’re often strangely priced.

I guess what I’m saying here is that the HTC Vive is a new platform. All of the problems I’ve mentioned are that of a standard new gaming platform. The games aren’t there yet (and some don’t even feel finished), the product is an expensive proposition — I recall saying things like that about the PS3 when it launched, and probably many other things. Technology must start somewhere, even DVD players were incredibly expensive with little support when they launched, but as a starting point, the Vive will take some beating. Yes, it’s expensive, and no, the games aren’t quite there yet, but if VR gets the support from developers it looks as though it might, and if those games come through, we could be in for a very bright future indeed.

Some genuine mind-blowing moments
Controllers feel amazing
Fun for everyone

Very expensive
A faff to set up
Games aren't there yet

Technology must start somewhere, even DVD players were incredibly expensive with little support when they launched, but as a starting point, the Vive will take some beating.