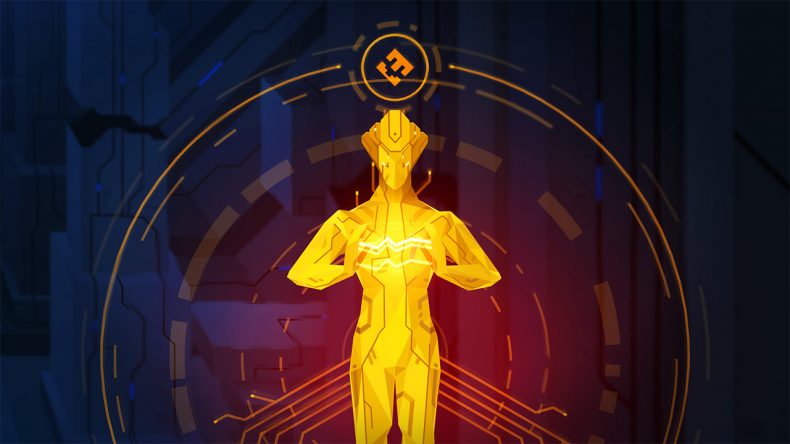 Remember the Taytweets Twitter account? The Microsoft powered AI that went full on Nazi within days of interaction with people? Things like that make it obvious that having AIs in charge of the things that we do in our lives just isn’t going to happen yet. But what if AIs infest the deepest darkest recesses of the web? And what would happen if after years they were unleashed?

Hyperforma doesn’t delve that far into the question, but presents us with a frequently stunning journey deep into cyberspace interacting with AI-powered firewalls and security algorithms. As a hacker you’ve got to decrypt the routines and bring these AIs into line in a quest to find the mysterious user known as Princess, and this is done via throwing your little avatar at a range of spinning cubic clumps in an effort to get to the centre and claim the decryptor.

Essentially the idea is simple: you’ve got to remove the ‘ice’ around the outside so you can get to the middle and claim it, but by the time I got to the end I still had little idea what I was doing except for repeating processes over and over until I achieved success. Your little yellow avatar bounces around the play area and removes certain cubes should it make contact, although some cubes don’t go away, others trigger the cluster to act in certain ways, triggering traps while white ice just bounces you back outwards to where you can’t do any damage. Your primary attack is initiated by pressing the A button which launches you toward the centre, and as well as being the main way you’ll remove cubes is how you have to attack the centre once it’s exposed. By rotating the left stick you can pivot the cluster to get a better angle to attack. Although the ways in which the movements of the stick affect the cluster are obvious, I really couldn’t ever get the cluster to move how I wanted it to and often found myself moving from good positions for attack to putting ice into the path of my charge at the centre. There are power ups too, such as Discharge which eliminates several cubes around the area you hit, or Clone which creates a duplicate of yourself allowing you to double your attacking efforts, it also doubles as an extra life in case you get blown up, so you’ll find yourself using that more often than anything else. The power ups stack too, so if you use discharge your clone will too, so it doesn’t make sense to not have a clone out at all times.

There’s a lot of pressing of the A button in this game, if you’re not doing it to attack then you’re doing it to skip through the lines of text dialogue that crop up in the – admittedly gorgeous – cutscenes that bookend each chapter. The journey through cyberspace sees you encountering large obelisk-like AI programs and it’s their defensive sub-routines that the cubic clusters belong to. Take out those and you’ll confront the program in a boss battle, which for some reason removes all of the power-ups you have access to. These fights boil down to memorising a pattern and sticking to it, you’ll use the left and right triggers to dodge around the boss in a circle and once again press A to attack. There’s no energy bar for the boss though, so how many times you’ll need to attack is down to guess work and your own patience.

Hyperforma’s aesthetic has a kind of 2D neo-Aztec vibe, comprised of dark greys and blacks but also lavished with bursts of yellow and alongside these gorgeous visuals is a rather sparse soundtrack that leans heavily on deep bassy sounds, kind of like when gaijin-style creatures are introduced in action movies, wearing headphones is recommended to draw you in to the action, I mean, you can play without the sound, but the experience isn’t quite the same really. Going back to the fact that I went through the game with little to no idea what I was doing, there’s a level about mid-way through that declares ‘The sphere holds a secret’ and even after re-playing it I have no idea what the requirement is to actually finish the level. I went for ages trying to work out what I was missing and eventually the whole thing just burst into a whole load of colour and extra clusters. I don’t know what triggered it, I just know I was bashing away at this green mesh sphere for what felt like an hour before the damn thing finally relented.

That’s the thing you see: you get all these powers, and you get told what the powers do, but you’re never told the differentiation between the cubes the clusters are made out of, you’re left to work that out on your own. Some seem to break down from getting hit, others don’t, I understand that white ice rebounds, but I just couldn’t figure out the black ice for the life of me. The general rule is that if you just throw everything at the cluster in front of you then eventually you’ll finally pass, which isn’t really the way things should be.

Hyperforma at least doesn’t outstay its welcome thanks to a short run time, meaning that while you’ll spend the game constantly trying to guess what you’re doing you won’t be doing it for long. The narrative is intriguing enough to keep you invested through to the end while the stunning visuals and sound make for an experience you certainly don’t get many of on Switch, but at the end of the day spending your time in a state of stupefaction doesn’t make for the most enjoyable game.

Gorgeous
Simple enough to pick up and play

Hyperforma is constantly stunning in terms of looks, but you’ll spend too much time wondering what you’re supposed to be doing.