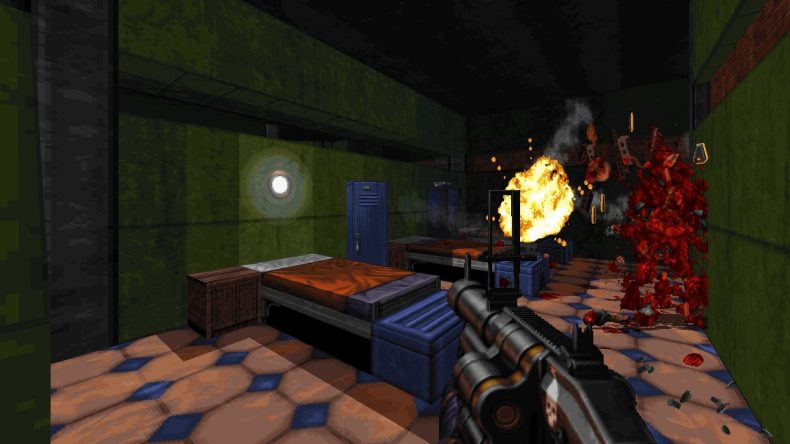 Switch Re:port covers the Nintendo Switch version of a game. Ion Fury was simultaneously released on PS4, Xbox One, and Switch on May 14, 2020 and scored 8/10 on Xbox One.

Ion Fury is a shot of pure adrenaline. It’s an homage to the games of the past, built entirely in an engine of the past, but with some modern traits that give it some quality of life improvements. In my review of the game on the Xbox One, I noted that the developers (Voidpoint) have a keen eye for detail and have created intricate spaces through a clever use of colour to create light and depth. That remains true on this Switch version. The pixel art is fantastically detailed and looks great whichever way you choose to play. My only gripe would be that in hand held the text is a trifle on the small side and tends to get lost a little on the smaller screen.

I’ve mentioned before in a review for another shooter that although hand-held mode for my Switch is by far my most preferred way to play the console, I tend not to use it as much for first person shooters as I have some issues with the way the joy-con controller’s sticks function. The blistering speed at which Ion Fury plays exacerbates this problem a little for me. I find the movement of the sticks a little flighty, and in a challenging game like Ion Fury that requires you to be consistently accurate, it becomes a too much of a hindrance to justify the joy of portability. In more capable hands though there is absolutely nothing to stop play in mobile format. The Switch version comes with the same amount of customisable options as the Xbox version. You can change the field of view, turn aim assist on or off, have always run on, and fiddle with the sensitivity and motion axis. In fact there is very little differentiation between what I have played on the Switch to that which I played on the Xbox. The only discernible difference being some ugly frame tearing that occurs momentarily when you walk through an auto-save gate. Otherwise it runs smoothly.

I’ve thoroughly enjoyed Ion Fury, the breakneck pace combined with gorgeous pixel art is a retro fan’s dream. There are some minor niggles I have in terms of a lack of any one utterly ridiculous weapon and the boss battles can be a little rote, however it plays so well with a cheesy and likeable protagonist that I can’t complain for too long.

Text is too small in hand-held
Frame-rate drags going through save points.

Ion Fury on Switch is a great version, it suffers a little from too small text in hand-held mode and has some frame-rate tear during auto-save moments, but otherwise it is a retro fan's dream.