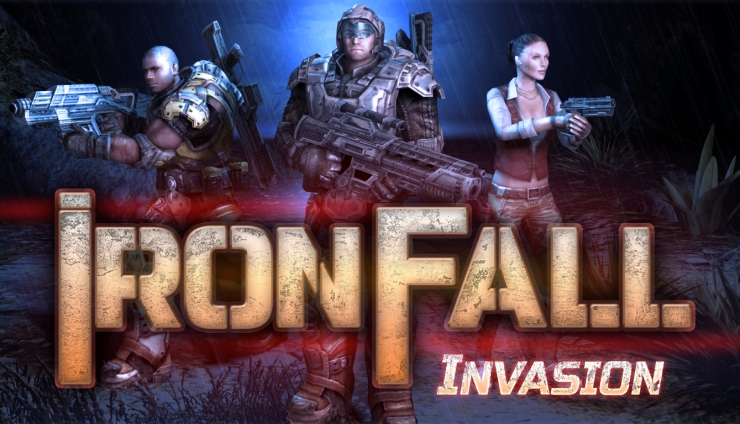 Before anything else is discussed, let’s talk about the elephant in the room: IronFall: Invasion has clearly been modeled on Gears of War. It is almost impossible to play it, let alone write about it, without the spectre of Marcus Fenix looming large. But where Epic’s legendary trilogy combined solid campaigns, cornball brilliance in its characterisation and storylines, and meaty online play, this handheld pretender falls sadly way short of the gold standard.

You play the part of a generic space marine dude called Jim. He is clad in some impressive futuristic armour, and has a couple of cool space guns. We first encounter him in a helicopter – naturally –as a woman called Samantha is dishing out orders. Earth is under threat from aliens known as Dyxides (!) who initially manifest themselves as robots that sound unnervingly like O.G Robocop, and explode laughably when shot at. It is your job over 11 diverse levels to basically save the planet by killing everything in sight. Your first mission lays out the mechanics, which are virtually identical to Gears of War. You can enter cover, shoot blindly from cover, run, vault over cover – there’s even the same active reload in place rewarding precision. Using the Circle Pad Pro or New 3DS, the game controls really well. Without such a device, you will struggle. It’s a nightmare playing a shooter relying on touch screen controls unless they are implemented in a genius way – like the superb Killzone Mercenary (but that Vita-exclusive banger had the benefit of two analogue sticks). We would imagine that the rubber nodule that acts as the second stick on the new 3DS model would also render this one a bit tricky in the control stakes, but each to their own.

Nothing says “underwhelming” like an opening mission that involves storming an abandoned luxury hotel, but that’s what you get. Enemies soon start appearing from a crashed spacecraft, and turn out to be gloopy-looking blue robots who can be extremely difficult to see; often your only clue of the whereabouts of your foe is when they start shooting at you. You soon learn that the weaponry lacks the grunt and oomph you expect and, goddamn it, require from this type of game. The pistol you begin with is pea-shooter laughable. The heavier automatic weapon just feels like a Nerf gun. Enemies take a fair few bullets before you off them, and when you do, they explode in a really rubbish way. Everything you do is tied in to your heart rate, which is displayed on the lower half of the clamshell. This anxiety-raising stat fluctuates depending on everything you do. Go for a bit of a run, and your heart rate increases. Get shot at, it will peak. You can calm the BPM down and avoid certain death by resting behind cover, but make sure you know where the enemies are when you do this, as they have a tendency to creep up on you thanks to some odd AI. Gameplay in single player mode is dull, difficult and repetitive. All missions require clearing the area of foes in order to progress and that is about it. There are some in-game achievements, and a stable and reasonably diverting multiplayer experience. I spent some time in the six-player battles online and while the maps are fairly unimaginative, it is quite a novelty playing a game of this ilk on a 3DS. You can wager in-game currency on the outcome of matchups which is an unusual and fun twist. There is also a Horde-style survival mode available which quickly becomes a chore. It is a bit cheeky that you have to pay separately for the campaign and multiplayer modes of the game, too. A figure of around a tenner would have represented a fair price-point at this juncture – you have to question whether folk are going to want to drop nearly double that for this one.

That isn’t to say that the unfortunately-named VD-Dev aren’t to be applauded for some of the stuff they have achieved here. With the 3D slider turned off, the game runs at 60fps. Ironfall Invasion’s levels are diverse even if it does begin with the very mundane, and it’s a good-looking game considering the size of the file. Unfortunately the gameplay is deathly dull, and there is absolutely nothing to invest yourself in emotionally with the cookie cutter characters and plot. It does show, however, that with a little more thought, the 3DS is perfectly capable of producing a landmark shooter.

A unique proposition on the 3DS it may be, but Ironfall Invasion has a long way to go to trouble the classics it emulates.