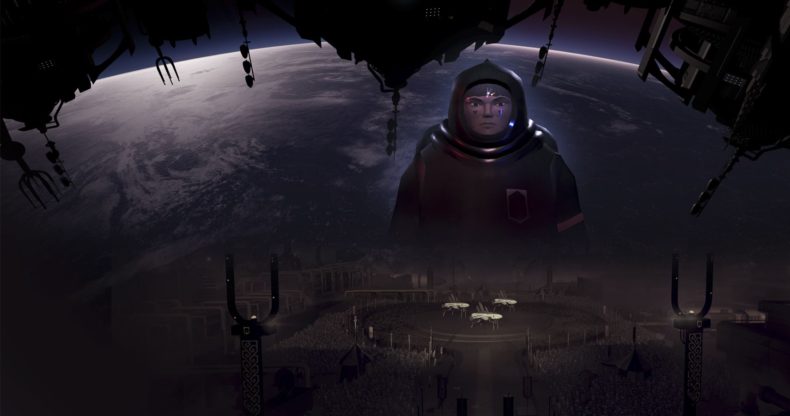 Exploring the vastness of space is no easy task. It’s even harder when your civilisation is on the brink of oblivion. JETT: The Far Shore sees you being sent to a distant planet in the hopes it can be colonised, building a new world from the ground up. There were times when I was so enamoured with the serene and somewhat cathartic rhythm of speeding around in my ship. Observing every inch of my potential new home was at times peaceful, but also dangerous. Dense forests, open seas, sprawling coastlines, ancient landmarks, and fallen civilisations. There’s a lot to see, and I was moved by just how vast it was.

CHECK THIS OUT: Anvil: Vault Breakers could be the rogue-like we’re waiting for | Hands-on preview

You follow the story of a scout and ‘anchorite’ called Mei. She’s been given an almighty task of embarking on a journey across the stars in search of a new home. Upon settling on a new planet along with her friends and colleagues, she must investigate new lifeforms and try to understand her new surroundings. JETT: The Far Shore features a highly personable tale of worry and wonder, friendship and terror. It’s both exciting and unnerving. As beautiful and astounding as the huge new planet is, there’s a lot that is unknown about it too. 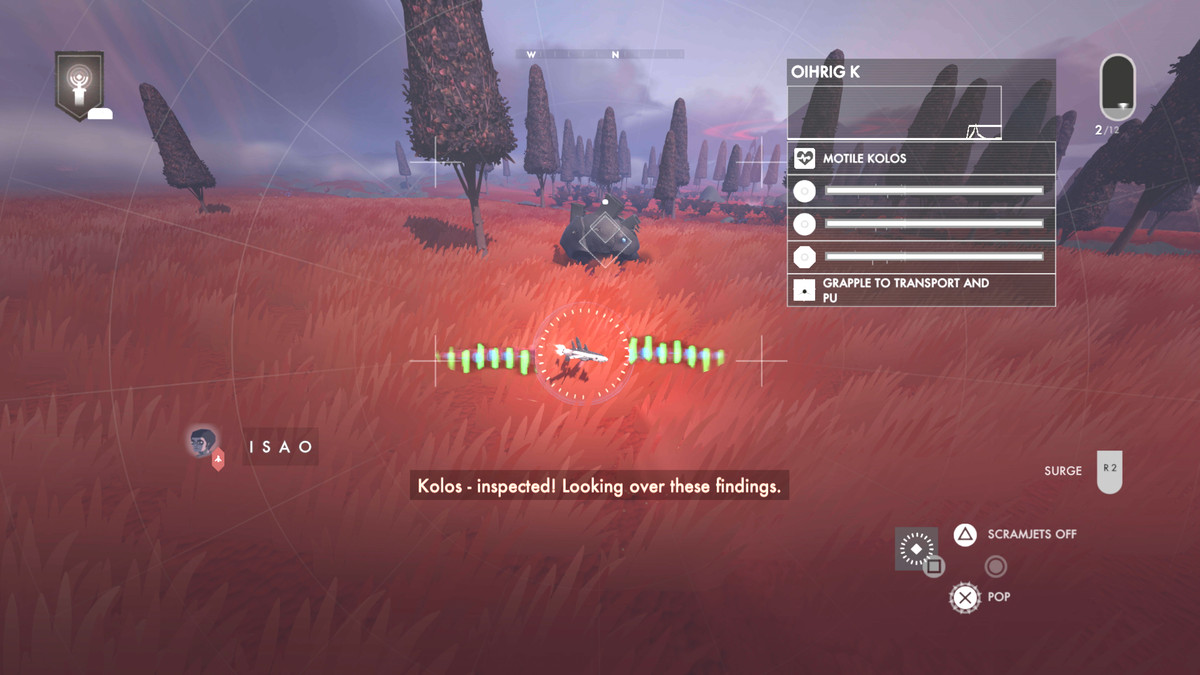 Everything you’re doing revolves around finding the source of the Hymnwave, a sound so beautiful it holds the answers to Mei and her team’s salvation. A chance to escape impending extinction and find a way to survive. Much of JETT: The Far Shore takes place inside a jett: your only means of travel. Your jett is a nifty spacecraft that can reach great speeds as well as being utilised as a tool for researching and exploring everything the new planet has to offer. After a slow start, you’re soon investigating every new plant and lifeform via a range of different tools.

The freedom of spaceflight

In the jett, you can turn on your thrusters and speed across the world. On PS5, if your thrusters are held down for too long, the vibrations rattle and can cause your jett to overheat and eventually fail. Pressing the right trigger down halfway ensures you maintain a safe speed, making great use of the adaptive triggers. By ‘popping’ you can jump across and over certain obstacles, treelines, and gorges. Pressing X will make your jett pop, which can also be used to interact with different plant life. You can also barrel roll with the same button, helping you to evade creatures that may try to attack your ship. 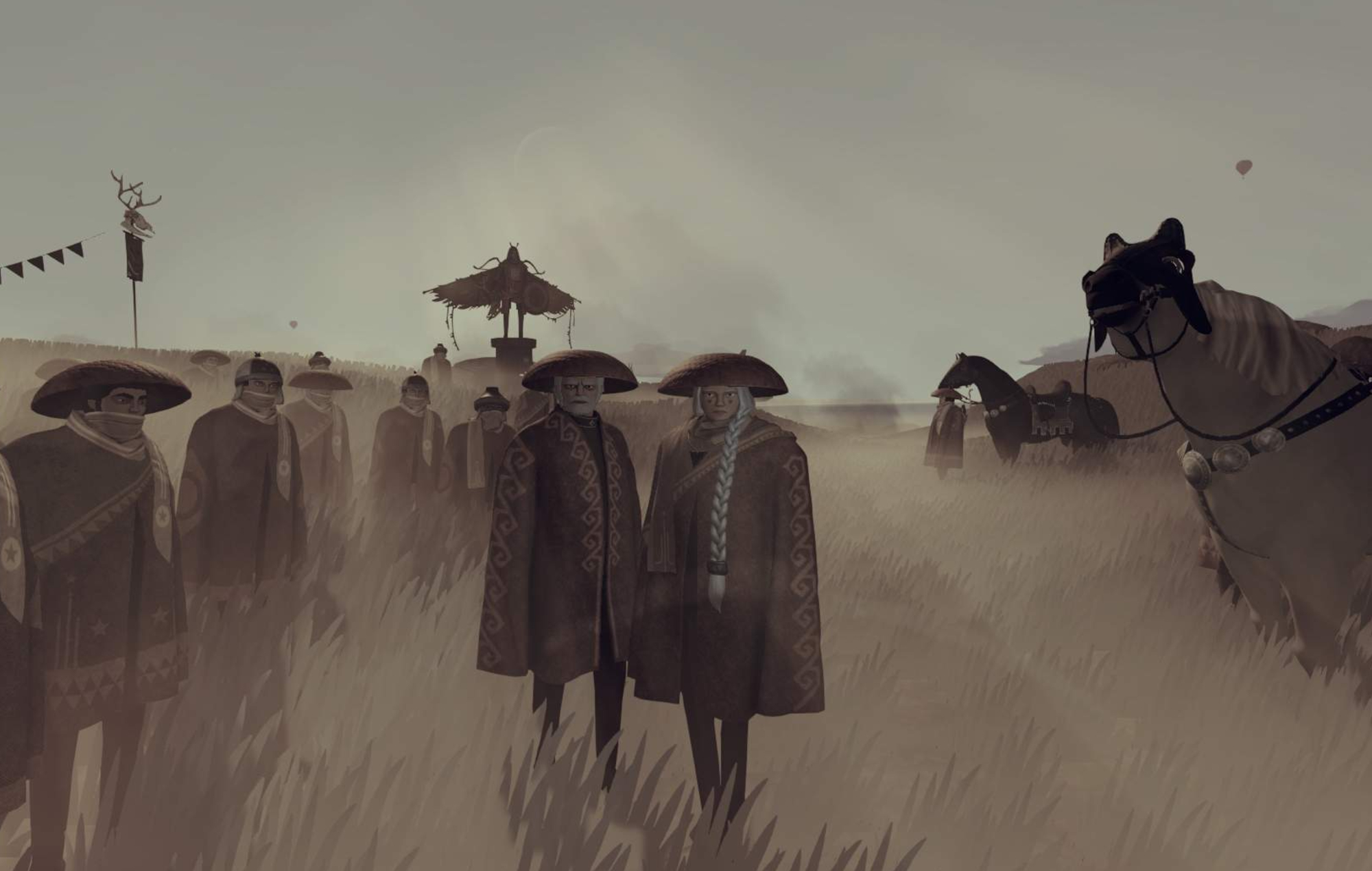 Movement is so fluid. Not only can you reach great speeds, you can make sharp turns by holding in L2 to do so. Turning your scramjets off will force the ship to slow right down. You have a lot of control in how your jett moves, however, it can be awkward at times. One of your tools is the resonator. This is what scans any new living thing. The camera focuses on your new findings, and if you’re moving fast it means the path ahead can’t be seen as the view swings round to look at the shiny new plant or critter instead of where you’re going. You have to get used to moving the camera behind you after every new discovery so you don’t crash or damage your ship.

Your Jett does get damaged, but flying over vapour stabilises your scramjets and keeps you safe. A lot of environmental interference can play a roll in how your jett is affected. Sometimes you’ll need to scurry into the shadows or find a hidey-hole to make sure you’re safe from harm. The main threats you face in JETT: The Far Shore can be troublesome if you haven’t mastered the controls. Thankfully, it doesn’t take long to know the difference between surging and popping. Along with the resonator, you have a light beam that brightens up your surroundings, as well as a grapple hook that can pick up and punt new objects. 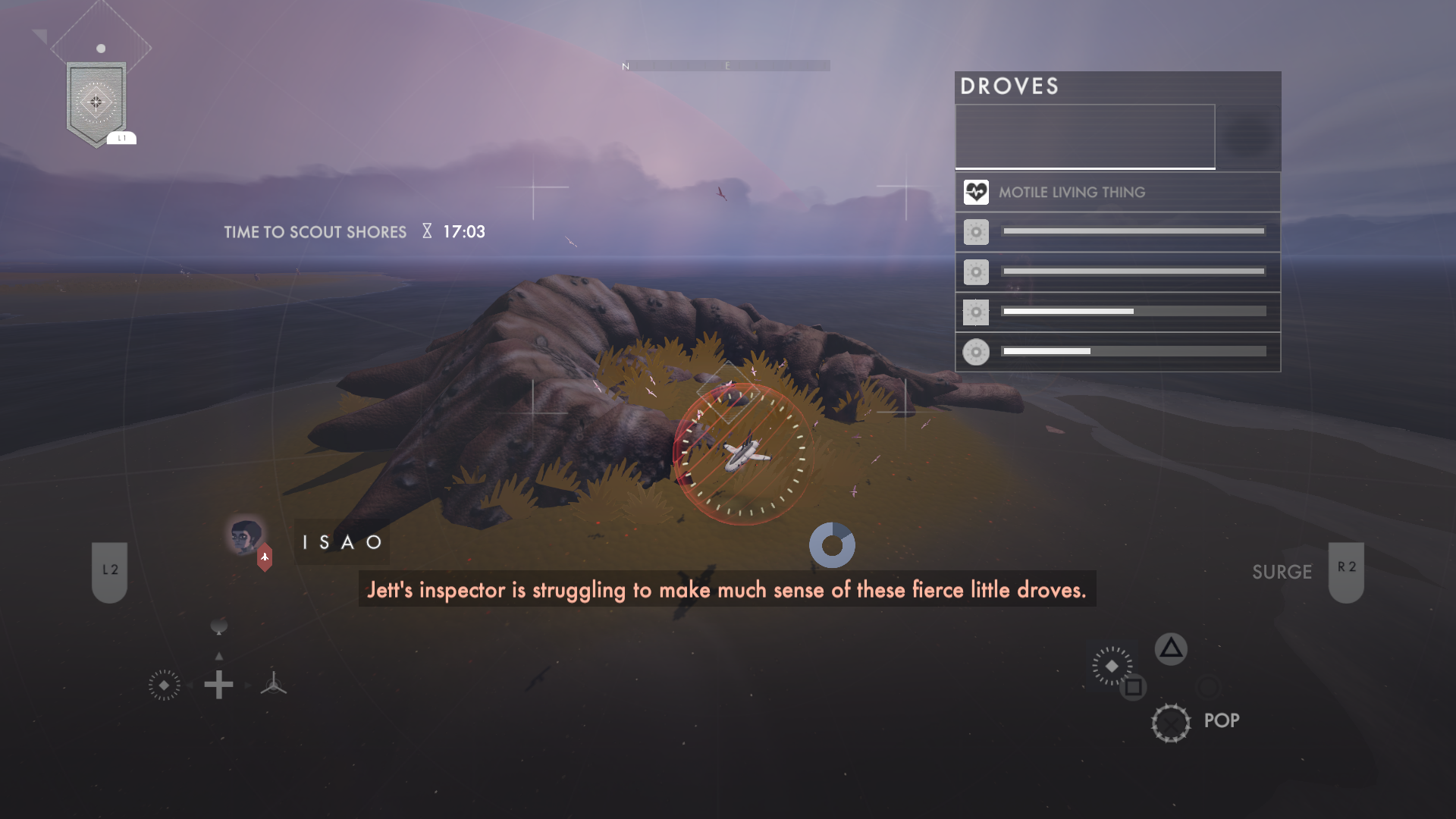 A lot of what you see and find in JETT: The Far Shore can be interacted with. The more you scan something, the more information becomes available. Different things have ways to make them react, and a lot of the fun is in playing around with your new observations. The entire planet is filled with lots of different locales and biomes, meaning there’s a lot to find. Whenever you set off on a new objective, the sense of wonder constantly grips you and pushes you to find all you can whilst watching as the world around you comes to life.

CHECK THIS OUT: Insurgency: Sandstorm feels different to the norm | Our review

A new sense of belonging

At certain points in JETT: The Far Shore, you have to walk on foot. It switches to a first-person mode, but the controls are so clunky you’ll be chomping at the bit to get back in the air. Luckily, much of what you do takes place in your jett. When you are on foot, you’ll interact with your friends, learning about their hopes, fears, and plans. The characters all have an interesting story to tell. You become quite fond of your team. All of the dialogue is in another language. There are subtitles, and when you’re grounded it’s never a problem. Unfortunately, when you’re tearing through the skies and trying to read what people are saying, you miss important objective reveals and story beats.

It was my biggest drawback of JETT: The Far Shore. I have no problem with subtitles, but not when you’re in control of a speedy craft. Despite this, I enjoyed the freedom I felt and the gorgeous world I was sent to explore. The soundtrack is astounding, providing an atmospheric vibe, rousing at moments you uncover something new. There’s so much beauty in the world, and Scntfc has managed to write a score that perfectly captures the mood in every situation. JETT: The Far Shore is special. It manages to turn your feelings of insignificance into belonging. The alien world is so, well, alien at first, but over time you begin to fall in love with this strange new place.

JETT: The Far Shore is a cathartic trip that makes you feel a part of something special in such an unknown and beautiful new world.