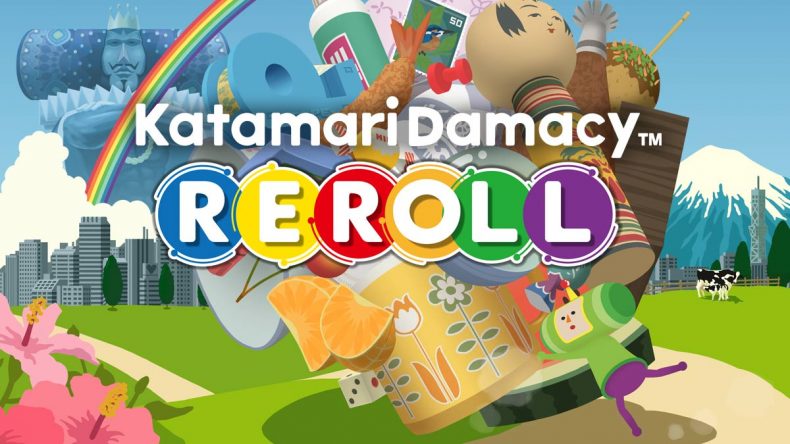 Katamari Damacy is a game I had heard a ton about but never really bothered looking into. There are loads of Katamari games across multiple platforms and my first real experience with the game was the Japanese eShop demo that more or less sold me on it. I’ve played, and adore, Donut County which is pretty heavily inspired by Katamari Damacy. 14 years later, Bandai Namco Entertainment brings the original to Switch and PC in the form of Katamari Damacy REROLL, and the release is well worth your time – but there are a few caveats.

The premise is interesting as the King of All Cosmos has wiped out everything and needs you, the prince, to recreate the stars and more. In addition to this, you follow a family on their way to see an astronaut land on the moon. The daughter in this family can sense the cosmos when you manage to bring back stars and constellations. Your Katamari is a magical ball that can attach smaller objects to it while rolling over them. Your aim is to increase the size of this by slowly collecting larger objects when possible. Running into an object larger than your Katamari might result in your Katamari dropping off an object. The game is split into various levels that are very different in settings or requirements and I had a blast replaying various levels for a variety of reasons. As you progress, you will find yourself getting better with controls and knowing when to roll over certain objects.

This port has two control options. The original mode has you use both sticks to move and change directions for the Katamari; the newer control option lets you use a single stick but the camera gets annoying, so I stuck with the original mode. As you play through levels, royal presents unlock cosmetics for the prince you control. You can play levels in any order but the initial unlock is a single or two levels at a time. Visually, it looks very good in most situations. There are a few instances where you move in too close or where there are portraits zoomed in where you see low resolution assets. Performance is a mixed bag, though. While the menus and one aspect of the gameplay run at 60fps without issues, the actual Katamari rolling and animations are all a lot lower. There is no option to increase the framerate for the actual core gameplay.

Since I haven’t played the original, I had no idea the few voiced segments had English voice acting on PS2. The REROLL version on PC and Switch has only Japanese voices with subtitles. The highlight of this game is definitely the music. I know this is an old soundtrack but it might be the best soundtrack I’ve heard this year alongside Octopath Traveler and Xenobade Chronicles 2: Torna The Golden Country. Every song is memorable and the soundtrack is great both inside and outside the game. My favourite tracks are most definitely Katamari Mambo and Katamaritaino. The big flaw isn’t really related to the game but more the port. On launching it for the first time, you are forced to play through the tutorial without being able to change any visual options. In my case, it booted up in windowed mode and didn’t detect my Xbox One controller until I quit and launched the game again. Katamari Damacy with keyboard controls is a nightmare, so make sure you have a controller handy. The port runs fine, but gameplay animations seemed capped at 30fps while the UI and some elements of the game run at arbitrary framerates.

Katamari Damacy REROLL on PC is a pretty barebones port. It was obviously made for Switch and then brought over with minimal visual options and improvements. If you’re okay with that, this is definitely a must-play game in a month that has Smash. If you’ve never played Katamari Damacy before, you absolutely need to experience it. The music is out of this world and I can see why so many of my friends kept recommending it to me. I would’ve loved a higher quality port but if this is what it takes to have Katamari on modern systems, so be it.

What a soundtrack!
Super fun gameplay
Never gets tiring

Katamari Damacy REROLL is a fantastic experience for people who have never experienced the game before but it is a pretty barebones port on PC.