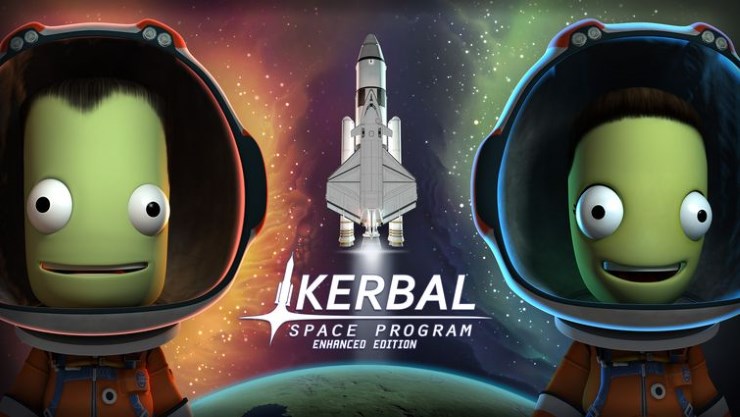 I reviewed the console release of Kerbal Space Program back in July 2016 and while I liked the core premise very much the game itself proved to be a poor PC port with tiny writing and confusing non-intuitive controls. Furthermore, it crashed frequently and my conclusion was that Kerbal Space Program was, and is, a fascinating and absorbing semi-realistic space sim, let down by a scrappy port.

Despite developing a passionate and enthusiastic following on PC, the console version failed to make any impact, which is a huge shame. Kerbal Space Program is a game that absolutely deserves to be played and the Enhanced Edition is now available for console players boasting a version written from the ground up specifically for console. The developer has tried to address the issues that the first release was accused off with a more streamlined UI for console, as well as better game stability and version updates. The Enhanced Edition still lags slightly behind the PC version, but it is now much more in line with that experience.

The core game of Kerbal Space Program remains the same from two years ago: to design, develop and manage your very own space programme. The premise is very alluring, and Kerbal manages to make you feel equal parts rocket scientist genius and utter moron who can’t tell up from down. The moment you manage to punch through the atmosphere of Kerbin to enter space, perform a small orbit of the planet and more importantly land the command module back down to safety cannot be over-emphasised. When I first did it I was reaching for the NASA application form, confident in my new found physics prowess.

You can play in one of three modes: Sandbox which has all the items unlocked for you to play around with and create whatever you want to, Science which requires you to perform research to gain points to spend on a development tree, and Career mode which, along with research experiments, also has the Mission Control module unlocked to carry out projects which will provide monetary value, research points and reputation boosts. I have spent much of my time in the Career mode, trying to create a space program from scratch. It isn’t easy. Kerbal Space Program is an impenetrable game for all but the most persistent of players. The learning curve isn’t just steep, its a sheer rock face, and this is in part where the biggest problem is, regardless of the being an Enhanced Edition.

The controls are much better. It is clear that this version has received a significant overhaul. The tutorial pop-ups that appear during the training missions are now legible, and much of the complexity of controls has been cleverly implemented into a radial menu that contains many embedded menus. Furthermore, you can pause the game at any point and bring up a dialogue box which will contain a list of the controls for that particular part of the game you are in. Building rockets and spacecraft is also simpler with the ability to flick cursor mode on and off for more precision placement. There are also a few different controller modes to choose from including a simpler mode should things get a little overwhelming.

Improving the controls is a huge step forward for console players, but where the game still requires some work is in a more detailed tutorial to help new players to understand a little more of how it all works. I understand that part of the appeal is to experiment and fail over and over again until you get it right, but there is a huge gaping chasm between starting at the very beginning to even getting to the point where you can fail. There are a number of tutorials that will help you get to grips with the basics like building a simple rocket to jettison into the sky and bring back down to safety, or building a rocket that will leave the atmosphere of Kerbin, as well as more complex scenarios like orbiting Kerbin and planning longer missions to the Mun as well as other planets in the solar system. However, as useful as these tutorials are, there is still a gap in terms of trying to understand how you progress suitably in career mode for example. A number of the early contracts you can take on in career mode include conducting observational research over specifics areas of Kerbin and at varying altitude levels. I am currently at a loss as to how I can achieve these effectively. Clearly I need some kind of flying vessel, but all the tutorials are focused on building rockets that fly straight up or vessels that can leave the atmosphere. Getting from the Kerbin Space Centre to a point on the planet at an altitude of less than 18,000 metres remains elusive to me. I am sure with time I will eventually figure out how to do these low level contracts, but with the tutorials guiding you towards landing on the Mun and beyond, I am more focused on that goal at the moment.

Perhaps the aim with the tutorials is to provide the player with the knowledge to leave the atmosphere and land on another planet, and then with that knowledge the ability to fly around Kerbin should just automatically slot into place. I mean, surely understanding how to send a vessel to the moon is way more complicated that circumnavigating the globe in an aeroplane? Sadly, I think I am just not smart enough to fill in the gaps and I suspect the same will be true of many others who may come to Kerbal on a whim, which is why I think the game would benefit from a more detailed tutorial, particularly throughout the early stages of the game. Rocket science isn’t easy and new players have a lot to learn in the early stages from complex control systems to aerodynamics and space flight, having a helping hand to guide them could go a long way to ensuring that curious players continue with the game.

My feelings on Kerbal Space Program haven’t changed much at all since I last reviewed it in 2016. It remains a spectacular simulator game. The core gameplay loop of experimentation, failure, tweaking, and finally success is incredibly compelling. The team of Kerbals you command are funny and endearing, and successfully performing a mission is satisfying. The Enhanced Edition has resolved much of the complaints I had with the earlier release and this version is significantly more stable and easier to control. I do still feel that some work needs to be put into the tutorials and guidance systems for players so that the brutal learning curve doesn’t scare too many curious players off. For now, it feels like only the most dedicated of players will stick with it, and that is shame because Kerbal Space Program is fantastic once you get to grips with it.

A marked improvement on the 2016 console release, it continues to be a marvelous simulation game with a compelling gameplay loop, but its systems often feel impenetrable for any but the most persistent players.

You may also like
Kerbal Space Program: Enhanced EditionTake-Two Interactive