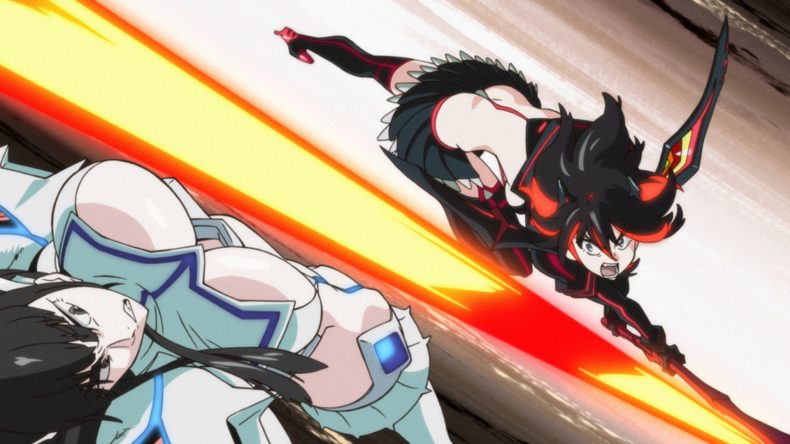 I think every Kill la Kill fan has wanted a game based on the series at some point. Fans of the anime who have also played any character action game probably desperately wanted PlatinumGames to be behind the wheel for it, sadly, some things don’t work out. But when you have the best fighting game developer in the world announce a Kill la Kill game, it impossible to not get excited. It seemed too good to be true and that’s when it looked like we had a monkey paw situation with APLUS being revealed as the developer. Thankfully, the end result is excellent and Kill la Kill The Game: IF is absolutely worth your time if you enjoyed the anime.

What we’ve got here, then, is an arena fighter. This seems to be the most popular genre for anime licensed games but out of the possible genres for a hypothetical game, this is a great choice – assuming a character action game was not an option. I’m also glad this isn’t a 2D fighter because while Arc System Works definitely could’ve made this feel as awesome, the arena fighter has allowed for some great spectacle here. Each character has close range attacks, long range attacks, a guard break, and dash attacks in addition to character specific special moves that use up half the SP bar. The relatively small roster of characters sees each character play and feel very different and that is awesome. There are some beginner friendly characters and some that will take you a while to master. Anime licensed games usually suffer from having only a few game modes but thankfully, this arena brawler is packed with lots to do both offline and online. Barring the story mode that spans two sides of a decently long story by fighting game standards, there is a ranked and unranked online mode in addition to your regular versus mode that is called free battle. The online mode has filter options for connectivity quality. You can also create or join a room here. The tutorial here is good but it is basically a reused portion from the story mode so replaying it involves sitting through the same opening story dialogue which is annoying. It also doesn’t teach you the bloody valor mechanic that is a rock paper scissors like clash to increase your valor. This uses your complete SP bar. Reaching maximum valor lets you use an instant kill basically. This mechanic is interesting because you need to judge what your opponent will do depending on his battle conditions to try and win. There is a random element but this mode grew on me over time. This section also has a training mode where you can play around with various settings and experiment on combos. For some reason, a traditional arcade like survival mode and two new horde like modes are under the practice portion of the game.

Covers challenge has you facing off against covers (basically enemies in the form of clothes that despise humans and want to destroy humans) in a one versus many mode. This doesn’t play out too well because of the arena brawler style fighting that has you focusing on a single target at a time. You can face off against 100 covers to set a record for time or take on an endless onslaught with a single health bar. There is also a timed mode where you can attempt to take on as many covers as possible in one minute. The survival mode puts you up against various playable characters one after the other to try and set a record for as many opponents taken down as possible. While the story has various references and flashbacks to key moments from the anime (including letting you relive certain fights) it’s mostly unique. It is great seeing cut-scenes redone in the game’s engine with songs like ‘Blumenkranz’ and ‘Before my body is dry’ playing. Unlike some games that let you just replay the anime or manga story in game form, this one has a new “IF” scenario told over two story paths. I expected the story to just make me play as Ryuko who is basically the protagonist of the anime but the story actually focuses on Satsuki for the first portion which is awesome. You get to play as Ryuko in story mode as well later. There are two story battles that annoyed me design wise but I enjoyed the story mode a lot overall. Without retrying battles, it took me about four and a half hours to finish the whole story. I played it once with Japanese voice acting and once with English voice acting. My second run took me about four hours.

Kill la Kill is a very visually striking anime. The trailers all looked great but I was concerned if the in game visuals and animations would look good. Thankfully, they nailed almost everything visually here. There are some moments where the camera zooms in and you can see slightly blurry assets but I’m definitely satisfied with how APLUS and Arc System Works transitioned Kill la Kill into game form here. The only area that feels a bit off is that some animations have less frames and feel like they were maybe built for a 2D fighter and not a 3D one. The special moves look fantastic and controls are very responsive on PS4 Pro. Performance in general feels superb during gameplay. When I play anime games, I’m almost always disappointed in the audio design because studios rarely license the original music or voice actors for anime games. Arc System Works has gone above and beyond here by not only allowing for full dual audio featuring the original voice actors from the anime in both languages, but also included Hiroyuki Sawano’s superlative soundtrack for the anime in game. Playing AOT 2: Final Battle and Kill la Kill The Game: IF at the same time has really made me appreciate how much more care went into all aspects of the localisation of the latter. I never thought a Kill la Kill game would be a better experience for all kinds of fans of the anime versus say a much bigger property like One Piece or Attack on Titan.

The Gallery mode has various sections for you to use the GP or gallery points you unlock through story progression and through normal fights. This includes a diorama mode letting you place characters in various poses and play around with the camera to create static scenes of your choice. You start off with a few of each and can spend GP to unlock more poses and options. There is also a cut-scene viewer called Anime that lets you view individual moments from the story or have them play out one after the other. A voice test lets you listen to unlocked dialogue and a sound test has music from the game and anime available for playback. You still need to pay to unlock the songs which is annoying considering how expensive they are compared to other unlocks. Barring the roster that has only ten playable characters including variations, the biggest issue is in the lip sync. It doesn’t feel right in either spoken language. It does work better with Japanese since the English spoken dialogue seems to end before the lips of any character stop moving. When it comes to the fighting, there are a few story battles that are annoying and these involve you taking on multiple enemies. This doesn’t really feel fun at all and feels a bit too haphazard with you focused on one at a time versus just being able to go ham in this mode like a musou. The camera can get a bit annoying in some situations and you need to keep track of your directional inputs even more in situations like this.

But Kill la Kill The Game: IF exceeded all my expectations. I was very concerned when Arc System Works announced that APLUS were the developer behind this release but thankfully the end result is nowhere near the mediocrity of the Little Witch Academia game. While I still prefer Dragon Ball FighterZ in terms of overall quality as a fighter, there’s no doubt that Kill la Kill The Game: IF is my favourite anime game right now.

Lip sync is off
Camera can get iffy during gameplay

Kill la Kill The Game: IF managed to exceed my expectations in almost every way delivering a fantastic experience for Kill la Kill fans like myself who have been waiting a long time for a game.

You may also like
Arc System Workskill la kill the game: ifPC