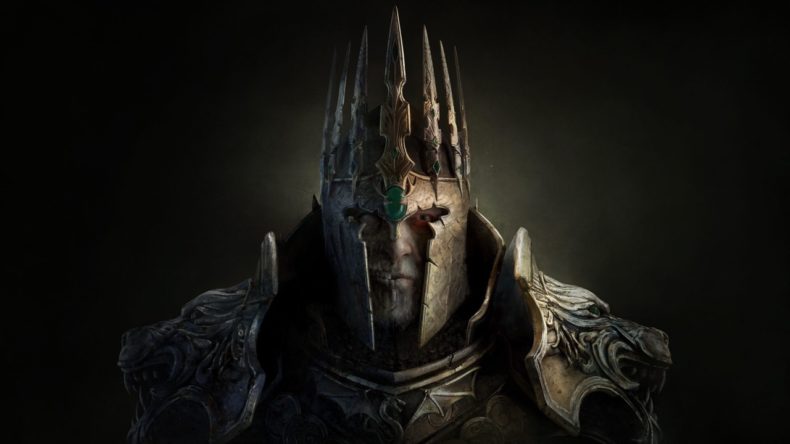 The tale of King Arthur and his Knights of the Round Table has been told and retold, reinvented and embellished countless times the world over. Particularly if you’re a Brit, you’ll have encountered multiple variations of the story in numerous TV shows as well as movies, games, books, and comics. It’s an enduring tale of heroism and magic, loyalty and betrayal, love and revenge. But it’s also the story of a fabled turning point, set in an era where Britain was shedding the last vestiges of its Pagan heritage to accept a new Christian god in place of the old faith. King Arthur: Knight’s Tale, from Neocore Games, takes this concept and runs with it.

Their version of the Arthurian Legend takes place in a time after the glory days of Camelot, after the fall of Arthur and the ill-fated quest for the Holy Grail. Mordred, depicted in many of the stories as the son of Arthur Pendragon and the sorceress Morgana La Fey, has slain the Once and Future King in a battle to decide the fate of Britannia. Forget historical accuracy here; this is Dark Ages Britain by way of Game of Thrones. Dragons, giants, druids and magical artefacts abound. 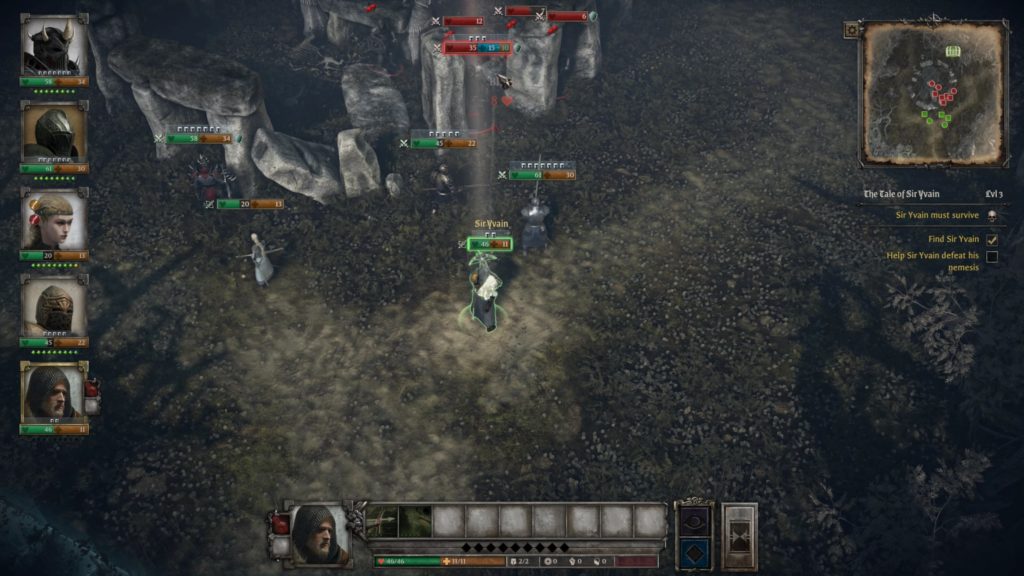 After a devastating final battle, both men lie dead. However, Mordred finds himself resurrected on the mythical island of Avalon, the resting place of fallen heroes. In ages past this hidden realm was like a paradise for dead heroes, where they could quest against evil and ride out on epic adventures, always rising again should they fall in conflict. Now it’s a dark place, riddled with fell sorcery and monsters. Arthur is an undead scourge terrorising the land, and the Lady of the Lake requires that Mordred finish what he started and kill King Arthur, freeing Avalon from the curse.

Your time is split between rebuilding and managing the ancient fortress of Camelot and riding out on quests to meet the evil head on. As Mordred, your job is to locate and recruit the former Knights of the Round Table, outfit them, train them, and lead them into battle. They’re a disparate, jaded bunch, crestfallen and bitter. They have their own interests and petty squabbles, and many of them aren’t far short of villains themselves.

During missions, King Arthur: Knight’s Tale is a turn-based tactical RPG with a healthy dose of exploration and treasure-hunting mixed in. The maps are grid-based, though this is well hidden outside of combat encounters. You’ll face off against a gamut of enemies, from knights and brigands to zombies, giants, banshees, and necromancers. Each mission you’ll select a squad of knights to go with you, although for many side missions you won’t even need to bring Mordred along. 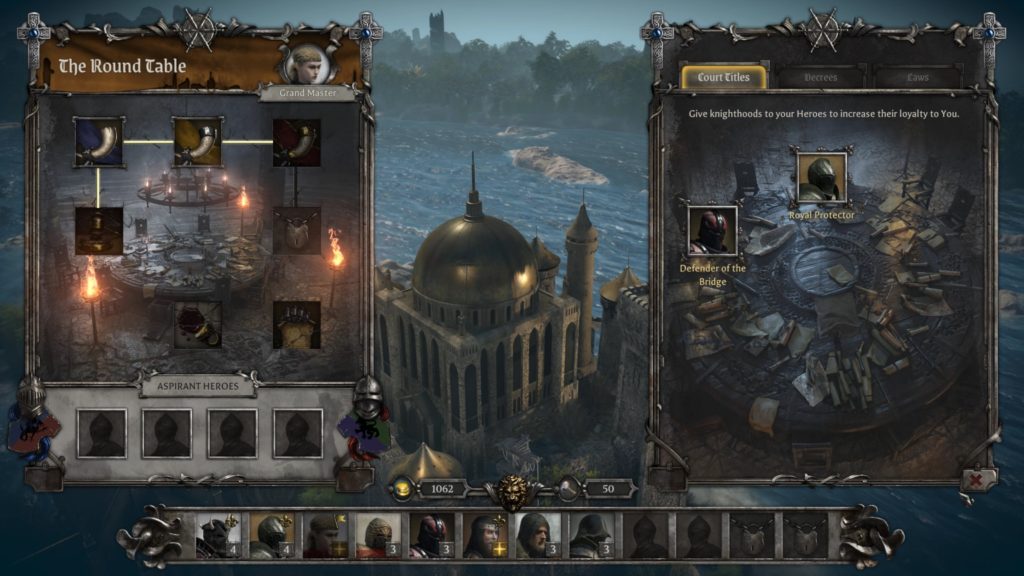 Mixing and matching your squad is important as your Knights can only level up from direct action. Your line-up is also finite, so once you’ve unlocked eleven, you’ll need to start making hard choices on who to keep when you eventually start meeting legendary heroes like Lancelot. Although, when played on normal difficulty, permadeath is a thing. You will lose knights, just as in XCOM or other games of its ilk, and there’s no way to get them back.

Also as in XCOM, each character falls into a specific class. There are Champions like Sir Kay, who wield two-handed weapons. They do massive damage, but have limited movement options. Archers such as Lady Dindraine and Sir Yvaine are essential to success, but their armour is weak. Then there are shielded Defenders like Mordred himself, and dual-wielding Vanguards such as the skeletal Sir Tristan, who have vast movement range but middling damage output. Finally, there are mages such as Merlin and Sir Ector, who sling spells and deploy buffs.

Having the right line-up is essential. Some missions will allow you to take five knights, but most only allow four. Often you’ll meet other characters in the field who will join you. Some stay with you after and some don’t. For example, in one mission you’ll fight alongside another legendary Dark Ages figure, but she won’t join you at Camelot when you’re done. 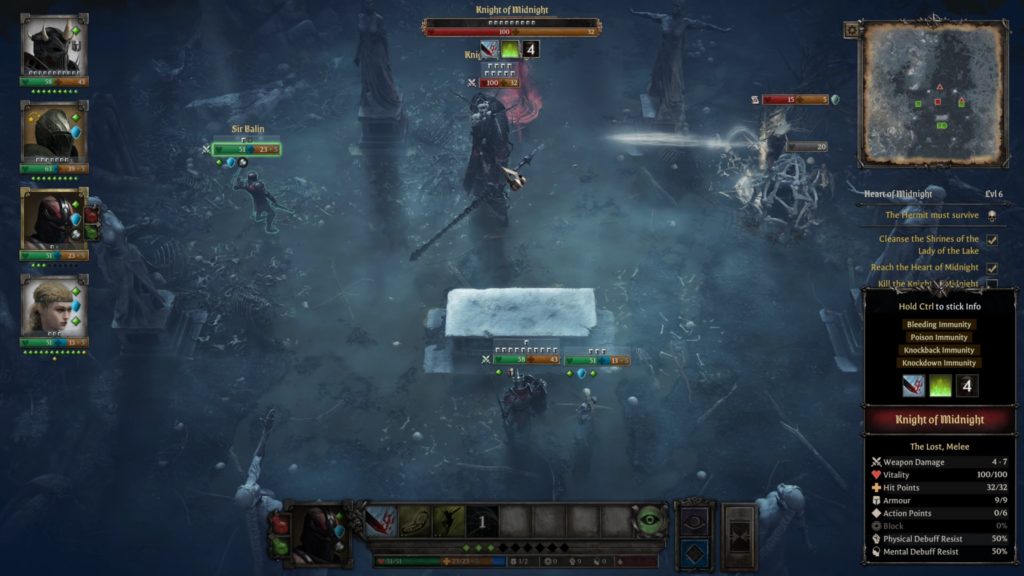 The combat is brutal and satisfying, but even on the standard difficulty I found it very unforgiving. Obviously how you outfit your knights and which skills you unlock (as each class has its own tree) play a major part, but the enemy hit hard and you will almost always be outnumbered at least two-to-one. Having played through Chapter One twice before during early access, I dropped the difficulty to Story and breezed through the combat, but I didn’t mind. The jump back up to normal was brutal, but I was more invested in the story and building up my citadel than the actual combat.

Story-wise, King Arthur: Knight’s Tale is strong. The writing is solid, and although most of the characters are pretty unlikeable, it’s an intentional choice. These characters are hardened by decades of fighting and, in many cases, dying. They don’t trust one another, and many subplots involve a betrayal of some form or another. There’s sibling rivalry, jealousy, vengeance, and a healthy dose of fantasy horror thrown in. For the most part the voice work is good, although every time Sir Yvaine speaks I want to break something. His voice actor delivers every line like he’s reading the weather and it’s so bad it’s jarring alongside everyone else, especially the likes of Ector and Kay.

After a while the repeated use of certain maps and assets takes its toll on the attention. There’s only so many times you can trudge through swampy forests and foresty swamps, ruined cathedrals and ramshackle villages. It’s often more fun to spend money and resources in Camelot, unlocking the various wings of the citadel to create a training ground and hospice, a cathedral and a marketplace. Here you assign Knights to oversee each area, granting a buff, and you can also issue laws and decrees. 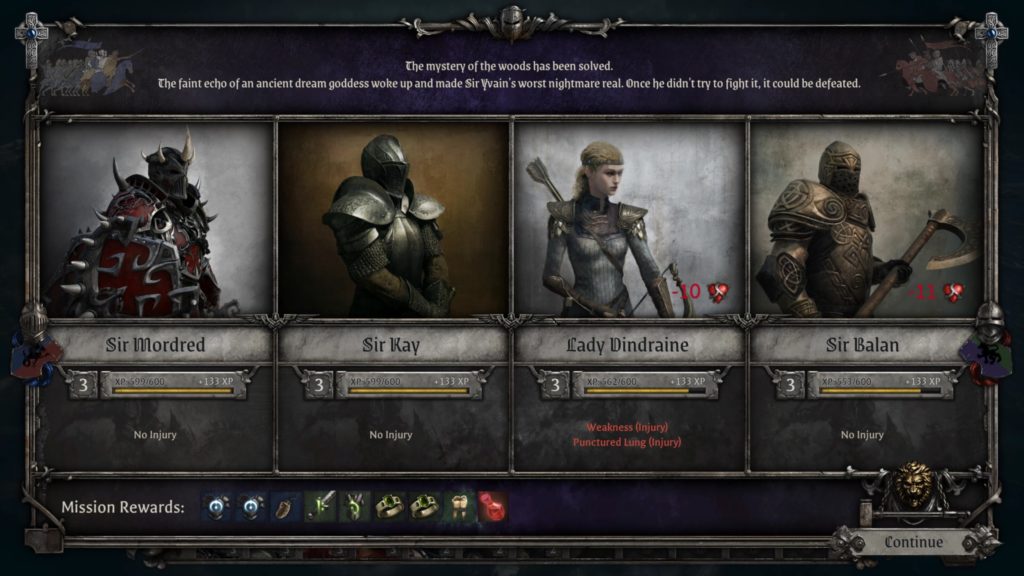 Many actions affect the four-way morality metre. You’ll be pulled between Protector and Tyrant, Christianity and Old Faith. Where you sit on the chart will determine which Knights you unlock, as well as buffs, items and events. I played mostly as a good Christian just because I wanted to unlock Lancelot, but you could skew the complete opposite way for characters like Morgana.

Neocore should be proud of what they’ve achieved here. King Arthur: Knight’s Tale is a great game, frothing with atmosphere and detail. The cutscenes are excellent (although on a few occasions the sound de-synced, annoyingly), and the writing is consistently engaging. There aren’t many likeable characters, and yet there are occasional spikes of dark humour regardless.

Combat is fun and satisfying, with difficulty options to suit any player and enough looting, exploring, fighting and base-management to keep the action fresh and the pace high. A little more variety in locations wouldn’t go amiss, but aside that King Arthur: Knight’s Tale is a grim, compelling take on the legend of Camelot.

Aside a few complaints here and there, King Arthur: Knight’s Tale is a grim, compelling take on the legend of Camelot.

You may also like
King Arthur Knights TaleNeocore Games