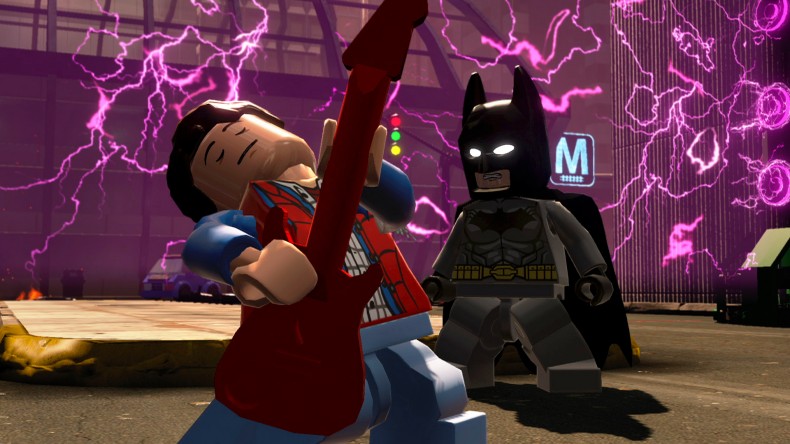 Let’s not beat around the bush here: LEGO Dimensions is an expensive proposition. There’s an enormous amount of things to consider with this game, and it does things that other “Toys to Life” games simply don’t, and in many ways it actually takes the genre forward, adding entirely new ideas beyond the simplicity of putting something on a portal and it appearing on the screen.

For instance, opening the Bad Cop pack you’ll be met with instructions – but only how to put the figure himself together. After popping him onto the gateway (that’s what we’re calling the portal, here) it’ll instantly make an in-game instruction manual appear that exactly mirrors the real world ones that you’d find in a normal LEGO pack. Dimensions asks you to build a vehicle, or other character-specific item, and to stop playing the game, and start playing with the LEGO. It’s a marvelous, inventive idea, that absolutely takes advantage of everything great about LEGO. You can unlock abilities for vehicles (etc), and after doing so ten times, you’ll unlock a new instruction manual that creates an alternative take on the original build – up to three different times. Again, the idea is simple: it’s just what you do with LEGO, but I can’t imagine a better implementation, nor a more simplistically innovative way to make this Toys to Life game truly stand out from the crowd. Much of what you get from Dimensions is down to how much you like the source material, as with the other titles from TT Games. But there’s so much here, with such a broad appeal, it’s hard not to imagine someone liking something. Starting out with Yellow Brick Road (perhaps an obvious choice), moving directly into The Simpsons, then some LEGO Ninjago. After meeting him, Homer nails it straight away: “It’s not selling out, it’s co-branding”. It’s funny, it’s clever, and shows an awareness of the person playing, but it also shows that like those early seasons of The Simpsons, Warner and TT understand that something can appeal to both adults and children, and still be clever enough for both.

It’s obviously not the best story you’ll ever experience, though it’s well written and original while using the characters you know and love. A weird bi-dimensional guy wants to be an all powerful despot, and heroes and villains from all manner of properties have been sucked into the fight between good and evil, with WyldStyle, Gandalf, and Batman (from the LEGO Batman games, not The LEGO Movie) at the centre, fighting back. It made me laugh multiple times, though, thanks to the characters and situations, and special mention goes to the trophy names – some of which are genius. Make no mistake, however, this is very much a LEGO game. I don’t mean that in a negative way, just that if you’ve played any of the plethora of previous games in the series, you’ll know what to expect. The silly humour, the fact there’s no penalty for dying, the faithful representations of the source material: it’s all what you expect. And, to a degree, so is the gameplay. It’s designed to be played by all ages, and is best enjoyed in co-op with two people who aren’t going to get too angry at one another. You’ll spend much of your time smashing enemies and LEGO to pieces, only to rebuild it into interesting structures that let you progress.

Where Dimensions differs from stable-mates, and where it excels, is the gateway itself. Unlike the competition, the gateway can take seven different toys at once. This means you can have two cars, a scooby snack, Batman, Homer, WyldStyle, and Marty McFly all accessible at once, and instead of (as in Skylanders) you just swapping them out when one of them dies, TT has put them into different categories that allow you to clear a path to otherwise gated sections of the levels. It’s not a new thing, and you can finish every level with the starter pack, but right from the get-go there is an incredible amount of packs available to purchase, that you’ll need to consider if you want to 100% the game. There’s no elemental separation here, and the categories are many. To break it down further: Gandalf is magic, so can use that on certain areas. WyldStyle is acrobatic, so can double jump and reach higher places – she’s also a master builder so can make bigger, better objects. Batman has his grapple-hook and batarangs, so he can use those on the environment – he also has the Batmobile, so your gang can use that when needed, too. If you choose to buy them, it expands further. Homer is a strong man, so can smash through walls. Bad Cop shoots a laser gun that’ll unlock other areas. It’s worth mentioning that most of these areas gated by the need to purchase new figures are for collectibles, and most categories have at least five characters within them (some are more like ten, and some include vehicle powers that can substitute for them), so you don’t need to buy every figure.

The gateway itself offers up rudimentary (but always fun) puzzle solving. The often used one is that you have three colours on the floor to paint your characters (red, yellow, blue) which will then correspond to an image in the background. The idea is that you have to match those colours up on the gateway, thus causing damage to a boss, or opening a door, that kind of thing. The bosses themselves are always great, and TT isn’t afraid to hit you with three of them on the bounce. As with the rest of the game, the challenge is minimal, but it does make the tried and tested LEGO formula feel fresh, purely thanks to the real life interactions with the portal. I can see people being frustrated with the (sometimes constant) swapping around, but I found it a welcome change.

It feels weird saying this, but LEGO Dimensions made feel so happy. Starting the game and realising that after placing a character down, it’ll ask you to build their accessory was always – and I say that categorically – a joy. LEGO is one of the oldest toys I can remember, and building the Mystery Machine before playing with it in a videogame is an experience like no other. The building is actually more fun than the game itself, but the fact it marries both together so well means that for a game-loving LEGO fan, it’s a bit of paradise.

There are issues, of course. An odd sound bug that causes the sound to go very low, before having the disc spin up and bring in the audio again is just plain bizarre, not least because it seems to happen around incidental dialogue. Switching characters is still awkward unless you hold triangle and manually select, and there’s some fiddly platforming, too. Sometimes characters will get themselves stuck, which is rectified by removing them from the gateway and re-placing them.

There’s no question that this will be an expensive hobby, but in (ever-so slight) defense of it, LEGO isn’t cheap, full stop. But to those of you who love it, and enjoy the series (those frightened for their wallets stop reading right now), then really, this is kind of an essential purchase. It revitalises TT’s own series of games, and at a time where I felt the Toys to Life genre was reaching Guitar-game level of progression and exhaustion, makes me think there’s room to manoeuvre once again. Make no mistake: this is a LEGO game with a few minor new additions that is successful because of the actual LEGO and the gateway portal, but it’s a great LEGO game nonetheless, and the most fun I’ve had with LEGO in years.

Review code provided by publisher along with additional figures and packs.
Liked it? Take a second to support GodisaGeek.com on Patreon!

The LEGO itself is magnificent.
Gateway creates gameplay changes.
Well written, and funny.

A few bugs and weird issues.
Will cost you a fortune.

LEGO Dimensions is going to be an expensive hobby, because despite a few minor issues it's a joy to build things before you put them into the game, and is one of the best games in the series yet.