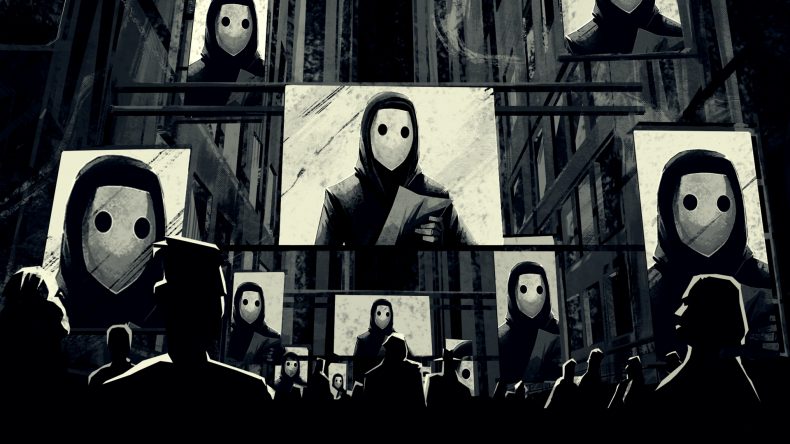 When we think of comic books, most will instantly think of Marvel or DC and their superheroes, especially in the wake of last year’s iconic Avengers: Endgame movie phenomenon. Comic books can be about more than just spandex and explosive fist fights, which is where Atomic Wolf’s new game comes in. While Liberated isn’t based on any particular comic or graphic novel, it does take the shape of one, its story and gameplay unfolding across the pages and panels of four issues.

It’s difficult not to begin by talking about the exceptional presentation of Liberated. Its black-and-white, noir style that brings back memories of the first two Max Payne games, not to mention the way it uses onomatopoeia bubbles to punctuate gunshots during gameplay, everything about the look just oozes style.

Liberated is set in the near future, where a tragedy has pushed the governments of the world to employ a system that monitors people 24/7. Those not meeting social media quotas or whose money doesn’t match up with their spending (or lack thereof), are immediately investigated, seen to be hiding something. This happens to Barry, the first protagonist of this multi-character story. Upon being summoned home to be seen by the authorities, Barry encrypts his computer before the police bash in his door. This leads to a choice: comply and be taken into custody, or make a run for it. Both eventually lead to the same scene, but running serves as a bit of a tutorial for the platforming elements in the game. It also introduces the player to the first of many QTEs that unfortunately litter the experience.

At its core, Liberated is a side-scrolling action-platformer. Throw Flashback and Playdead’s Inside into a blender, then sprinkle in some of Ubisoft’s XIII in for maximum tastiness, and you’ve got Liberated. It’s also a great action-thriller, with some rather good set-pieces and excessive shootouts that wouldn’t be out of place in a Die Hard movie. All within the confines of comic book panels, just to make it that much more impressive.

It’s not all good, however. Especially not in the Switch version I played. Visually, it’s absolutely fine, same goes for the hefty sound effects that punctuate each shootout, but the performance isn’t great. The framerate often chugs during the busier moments, sometimes even during important QTE scenes, and the animation looks rough a lot of the time. It’s also chock-full of bugs. One particular one led to a number of deaths during a particular level, as the characters sometimes freeze up for several seconds after climbing a ladder. In one frustrating moment, climbing a ladder triggered enemies appearing and shooting at you. As you can imagine, being left immobile and defenceless, it was like watching the scene where Murphy was gunned down, prior to becoming Robocop. This particular bug happened a number of times throughout the game, pulling me out of any immersion at the time.

Liberated has issues with its difficulty, too. One particular QTE was near impossible to complete successfully, and there are quite a few points in the game that almost seem to require your failure, so you can react accordingly upon reloading the checkpoint. Dropping into an area with enemies on either side, having to wait for the landing animation to complete before you can fire, will inevitably end with another Murphy-like death.

All these issues keep Liberated from being the game it could be. It’s a real shame to be honest, because with a little more polish it would probably be one of the better games of its type. The stealth is a little useless, but the almost twin-stick nature of its combat makes shootouts feel both tense and exciting. It even throws in a few puzzles to keep you on your toes, a couple of which took me far longer than I’d care to admit, breaking up the action quite nicely. The setting and story also keep you glued to the screen, despite being a little predictable. The tale of a dystopian near-future in a totalitarian state is actually more believable than any of us would like, as is the path of “The Liberated,” the activist group pushed into more and more extreme forms of protest against the oppressive system. Okay, so this means that none of the playable characters are particularly likeable as they’ve all got blood on their hands and a guilty conscience (if they even have one), but sometimes stories don’t need heroes to capture your attention and your imagination. It’s a difficult feat to pull off, but Atomic Wolf does it pretty well.

With its distinct, comic book art style and impressive narrative, Liberated is a game well worth a few hours of your time. Be prepared for some poor performance on Switch and a bit of an overall buggy experience, but if you can look past that, you’ll be left with a smart, exciting action-thriller.

Poor framerate on Switch
Quite buggy