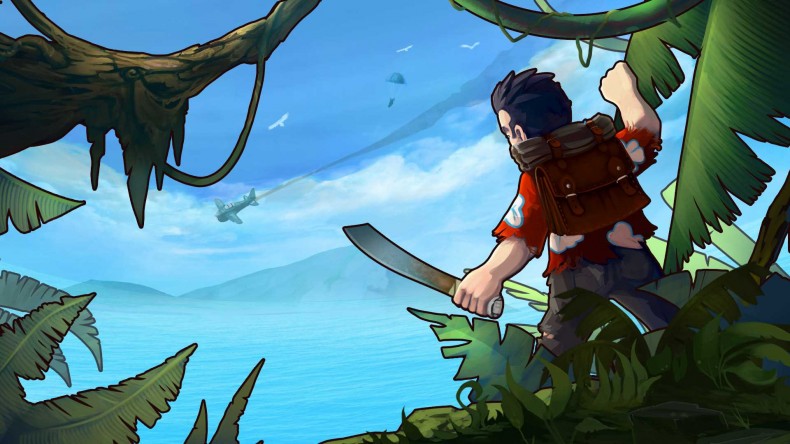 Playing Eastasiasoft’s Lost Sea, I couldn’t escape the feeling that it started out as a much more ambitious project and was slowly chipped away at until it became more palatable, more sellable, and a little less interesting at the same time. That’s not to say Lost Sea doesn’t have its charms. Following on from a plane crash in the Bermuda Triangle, your character (which you can select from several cosmetic choices) wakes up on a sandy beach with only a machete for company. Before long you’ll find an eccentric professor who believes you’re in another dimension and charges you to find a magical tablet that will allow you to travel to another island. The idea is to work your way up the chain of islands, defeat a boss and get the hell out.

Each island is procedurally generated, offering a decent range of environments from tropical beaches to ice and snow or dense rainforests. Enemies will come at you here and there to prevent you finding the keys to the huge mythical doors that bar your path to the tablets. Luckily your machete can bring down most things, although if you take damage you’ll need to find a first aid kit to heal up, and they’re not easy to get your hands on. Scattered around the island are assorted crew members with various special skills such as bridge-building and lock-picking, who can also carry items in addition to providing stat boosts such as increased damage or defence. You can recruit them to follow you, though you’ll need to keep them alive as they’re defenceless, and when you swap them out they’ll wait for you at the level’s dock with the professor.

Once you return the tablet to the dock you’ll be able to use it with the map, where a randomly assigned number will determine how far up the chain of islands you can travel. The difficulty associated with each island varies, so you’re never sure what you’re getting into, but that’s also where Lost Sea’s core mechanics start working counter-intuitively to each other.

The exploration and adventure work well with the XP-based character progression for the most part, allowing you to grow steadily stronger and bolder as you move forward, but the almost arbitrary perma-death returns you to the start every time you die, minus all your unlocked skills. You keep a portion of your experience and scavenged gold, but it dilutes the sweet wine of exploration with the tepid water of repetition. In short, it becomes a bit of a grind, even with teleporters to zap you back up the chain. Before long, going through the same motions to the same music can’t be saved by procedural environments that, sadly, just don’t vary that much beyond the visual. The layout and size don’t alter much from island to island, and you’re never tasked with any challenges beyond finding this to open that. Even the enemies are all vanquished in roughly the same way. It’s all a bit safe and uninspired, until the perma-death makes it tiring.

Lost Sea is a pleasant enough adventure to lose a few hours to, but over long periods it gets stale and becomes an exercise in repetition. Something about it makes it feel almost like a mobile title, and as a result it’s unlikely to hold your attention for long. Without the permanent death it might have had serious appeal for younger gamers, but as it stands the difficulty is pitched slightly too high for juniors while the gameplay is far too simple and unexciting for grown-ups.

Lost Sea is neither particularly original nor exciting, but it's charming enough in its own way.