previous
The Pillars of the Earth Review
random
next
Rock of Ages II: Bigger and Boulder Review
1 like 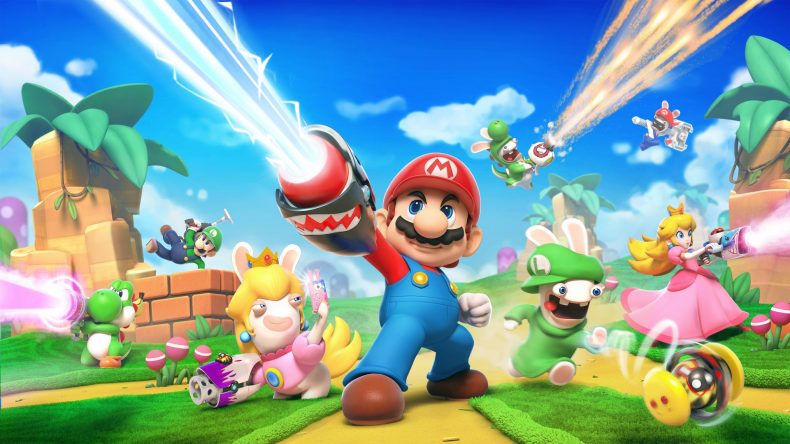 I’m probably not the only one who scoffed at the idea of a Mario and Rabbids game as details of Nintendo’s Switch leaked. The idea of one of gaming’s brightest stars being paired with interactive entertainment’s version of the Minions seemed unfathomable. Partnerships with Sonic, while initially bizarre, have now settled into a kind of weird acceptance as the pair reignite their 16-bit rivalry every time there’s an Olympic event, but this just seemed odd.

Fast-forward to the sight of Yves Guillemot on stage with the legendary Shigeru Miyamoto, the pair waving about those hand-cannon replicas, and the site of Creative Director Davide Soliani in tears, and all of a sudden we’re all in love with the idea. Like Mario and Sonic’s partnerships bring Mario right into the sports-party game genre, his two footed lunge into the Rabbids grasp is a complete genre shift. Mario is now taking part in strategic turn based shooters, imagine thinking that back in 2006, let alone in the 90s. Make no mistake, though, Mario’s name is on this, but it’s really the Rabbids’ adventure. This is evident from the setup, the room of a girl genius, and her wanting to show off her invention to her robotic assistant Beep-0, a headset that makes two objects combine, the SupaMerge, and after yet another failure our genius wanders off, forgetting to turn the thing off. One time travelling washing machine and a Mario poster later and the Rabbids find themselves in the Mushroom Kingdom, and causing havoc as all good (and bad) Rabbids do. Considering this is a Mushroom Kingdom created from a headset and a poster it could be argued that this is merely a facsimile of Mario’s world, and as such not canon, not that it matters, while this doesn’t hit the heady heights of a pure Mario title it’s still a great game.

From early impressions this has been seen as XCOM for kids, and in a way that’s fair: you take it in turns to place yourself strategically, and fire upon your enemies to take them out. You can take cover behind tall or low structure which can provide either 50 or 100% cover, and your characters; while they don’t level up, do gather orbs which unlock talents on a skill tree. So, this is XCOM, but dumbed-down for pretty much anyone to understand it.

Don’t take that to mean it’s easy though – far from it. After the first four or so chapters the difficulty curve is almost vertical, the gunplay is magnificent, but a wrong move can wind you up dead. Early on you’ll meet your first Smasher, a brute that charges at whoever shoots them and deals heavy splash damage. These will most likely be the first unit that actually causes you trouble, and once you’re past the first of them, there’s another waiting for you. The bright colours of the Mushroom Kingdom hide the harsh underbelly of a terribly unforgiving game. As is the norm with this genre, (most) cover degrades as it is hit, with a destroyed block releasing coins in typical Mario fashion, but in typical RNG fashion your enemies have an unerring ability for accuracy, and 50% cover is a considerable lottery for one to consider. To begin with, the enemies hit hard and have relatively large health pools, and the generous movement system can make things seem unfair, but it’s all fine; a good plan will always see you right, and if you find yourself having trouble with a particular fight, each battle gives you access to an easy mode, which grants you a heal to your party and less health for your enemies. It’s a great way of evening the playing field and ensuring less talented players aren’t alienated.

The movement is what really makes this though, and as you progress it only gets better. You can move to enemy squares to slide tackle them, after which your entire movement area is still open to you. After a successful slide you can then work your way into cover for a pot shot from their flank for a 100% chance to hit. You can also target ally spaces to perform a Super Jump to space further than your usual movement area. Later unlocks allow you to attack more than once during tackles, and also to attack from a Super Jump, so while you can’t jump into a tackle, eventually you can tackle into a jump onto an enemy, then move to cover and then take a shot. The thing is, when it works, it’s great, there’s no real feeling like watching a plan reach a successful conclusion, the only souring point really is the RNG. For those that don’t know, RNG stands for Random Number Generator, basically anything with a ‘chance’ attached to it is subject to RNG. So, that moment where you’re behind 50% cover? Year, if the random number generator finds your enemy in favour on what is essentially a dice roll, then you’ll get hit. This also affects whether cover gets destroyed in one or many hits, and, as with any system like this, it can feel to be weighted against the player, after all, when the computer is involved in decisions that benefit itself, what else are you going to believe? Hmm?

I digress. You wander around and you’ll come across rudimentary environmental puzzles, which are less challenging than the actually gameplay segments, a slide block here and a button press there and voila! It’s a bit insulting because the game refuses to take it easy on you in the meat of the experience, yet a short path in one way or a plainly obvious block in another direction makes it all too obvious where the secrets lie. Granted you might have to trek back and find stuff you missed before as abilities get unlocked, but it’s telegraphed to within an inch of its life. Chapters are short, and a successful completion of a world grants to access to all parts, easy.

Missions task you with one of few requests. You either take out all the enemies, get to a designated area, take out a required amount of enemies from regular respawns, or defeat a boss. All of those should be self explanatory, even boss battles which broadly follow a regular ‘rule of three’ pattern within the game’s own rules. It’s all about figuring out the trick and repeating it. These end of chapter battles can feel a little gimmicky (though one in particular is magical) and they’re not quite as satisfying as the regular fights, but they break things up and bookend the chapters nicely. At the end of the day Davide’s tears are, rightfully, of joy. He and his team have created an exceptional game that, while it doesn’t hit Nintendo’s heights of excellence, it’s easily the best game the Rabbids have ever been in and quite possibly Mario’s best non-Nintendo spin-off. This is no mean feat, Mario’s been in a considerable amount of genres now and with several development teams, but this is definitely his finest non-Nintendo hour. It’s an unholy combination, seemingly brought around on an evening consisting of some Jagermeister, and some premium strength lager, but one that’s given us something a bit out of the ordinary, and introduced us to something we’re not comfortable with.

I don’t care if you don’t like the Rabbids or if you’ve not played a tactical shooter before, this is well worth a go even if you’re just a Mario fan. Granted, it doesn’t benefit those who prefer to jump in with the subtlety of a three-point Mario jump but it rewards those who want to think about what they’re doing, and it’s well worth it.

Not quite ‘Nintendo good’
RNG can feel unfair

Easily the best game the Rabbids have ever been in and quite possibly Mario’s best non-Nintendo spin-off.