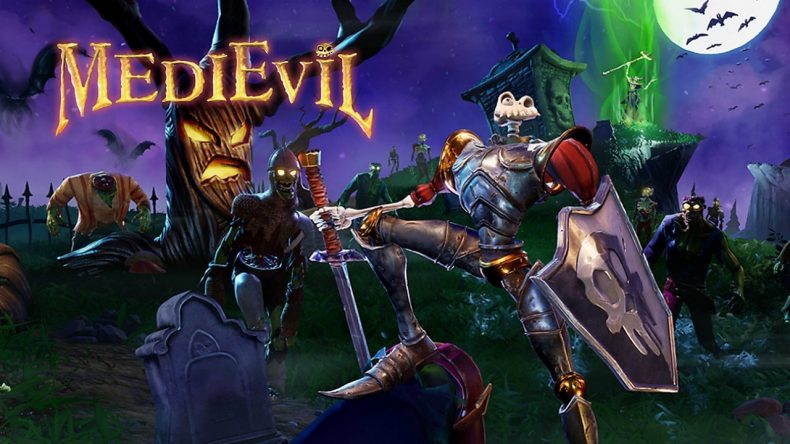 Unsurprisingly, a large portion of my mid to late teens was spent gaming. Living with a big pile of step-and half-siblings meant we often played games together, and not having a lot of money meant when we got hold of a new game we rinsed it before moving on to anything else. Having spent most of my life up to that point dipping in and out of games, it was this period when I really fell in love with the hobby. Final Fantasy 7, Resident Evil, Parasite Eve, Diablo, GTA… I have fond memories of playing each one multiple times without a single complaint, and not only because I had bugger all else to play.

Another for the list is MediEvil, a PS One-exclusive action adventure starring resurrected Knight Sir Daniel Fortesque. I played so much of MediEvil and its sequel that I still see bits of them both in my fever dreams. That being said, I thought I’d probably seen the last of them years ago, and wasn’t expecting Sony to announce a remake for MediEvil, completely rebuilt and yet so faithful to the original that you can still use guides from 1998 to complete it. I actually get a strange feeling going through MediEvil now, two decades later. On the one hand this type of game is no longer “for me”, having moved on from this style of 3D platform/action game years ago. But on the other hand I can remember with crystal clear clarity when this game was for me, and of course in my mind’s eye it looks no different to the ’98 version. But it is different, in ways I struggle to put my finger on beyond the aesthetics.

Anyway, you take control of the aforementioned Daniel Fortesque, the former royal champion unfortunately slain by the first arrow of the first battle in the war against evil necromancer Zarok. Subsequently resurrected by Zarok as a by-product of the sorcerer raising an army of the dead, it’s up to Sir Dan to once more sally forth against his nemesis. What follows is a comically creepy adventure, the type of which could only have been brought into the existence in the 90s. Sir Dan can equip two weapons at a time, be that a sword, club, axe, crossbow, throwing knives, or a number of useful implements. Some of the weapons are straight up damage dealers, but some, like the club, can be used to interact with the environment, for instance to break through floors or walls. There’s a fair amount of combat, but much of it comes down to mashing the attack button and occasionally hitting the circle button to perform the secondary attack of your equipped weapon.

Boss fights come in various flavours but none are overly taxing, and usually require you to work out a specific victory mechanic and perform it until the boss is done for. It’s not unfair to say that games have come a long way in 20 years, and all the upgraded visuals in the world won’t change things like a lack of checkpointing. Several times I died towards the latter half or end of a level only to be sent all the way back to the start because there are no save points or checkpoints along the way. It’s frustratingly old school, especially as it removes all your progress including secrets found.

Progression is usually handled by the age-old method of coloured keys, which aren’t often found far from the locked door they’ll open, although you’ll often have to do something out of the ordinary to get them like overcome a trap or solve an environmental puzzle. Each stage also hides a chalice, which is “filled” by killing enemies, and which once found allows Sir Dan entry into the Hall of Heroes, where other legendary warriors will bestow him with upgraded weapons, new gear, or health phials that refill your life upon death.

MediEvil controls fairly well, although it does feel a little loose and oversensitive at times. It’s hard to imagine it appealing to anyone wholeheartedly though, given as it may be too tough for younger gamers and older gamers. Even those who never played the original might struggle to connect with its archaic systems. That said, it is still fun, and it looks absolutely gorgeous at times, with a grim yet colourful cartoonist style – and it sounds wonderful, the original score transporting me back in time as surely as the mechanics did. It’s worth noting that the camera has been overhauled. I’ll confess to not being able to remember the original in enough detail to compare, but the camera is still apparently set to 1998 in places. It’s clear the developers have done their best here, but it can still occasionally frustrate.

If you did play the original and fancy a trip back to a simpler time, this is well worth a go, but don’t go in expecting a huge revelation. MediEvil is a hallowed classic, undeniably, and it’s presented here with a shiny new look and comfortably familiar feel, made with enough love and attention to resurrect its appeal for existing fans, but its generally dated design is unlikely to attract new legions of players. That being said, I for one have had a blast returning to Gallowmere and reliving a well-missed period of my life.

MediEvil is a hallowed classic, undeniably, and it's presented here with a shiny new look and comfortably familiar feel, made with enough love and attention to resurrect its appeal for existing fans.

Strikers Edge is now available on PS4 and PC