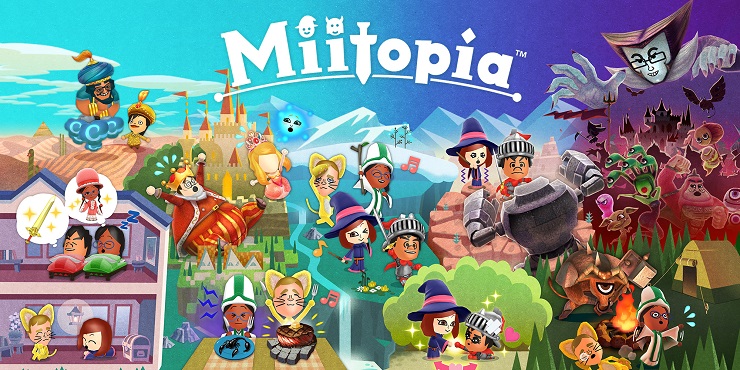 I love RPGs, but I have to admit that they can be really off-putting to newcomers. They normally have a deep narrative and complex systems that can be tough to get your head around. As a result, Nintendo have decided to attempt to simplify the whole shebang and make it more palatable by accommodating Miis like Tomodachi Life did.

RPGs tend to be stories told to you. Miitopia falls into that line as well; here the big bad is stealing the faces of the people and being in the wrong place at the wrong time, it falls to you to put faces back on people’s heads and put an end to The Dark Lord. What sets this aside from regular RPG-emo-teen-saves-the-world fodder is that the story will be exclusive to you. While the plot is set, you choose the characters and their personalities, from your friends, your 3DS Mii Maker, Tomodachi Life, or Nintendo’s own Mii Directory. I wound up with my wife filling the role of the Dark Lord, while my travelling companions were made up of my son, and two people from Twitter, a one JKL and also friend of the site @revatar.

As you pick your friends you assign to them jobs and personalities, jobs give them the abilities they carry into battle, like Warrior, Cleric, Thief, Cook, Pop Star and Mage while more get added later on. Personalities dictate certain traits that manifest in battle, like buffs to attack power, a member distracting an enemy by playing with them or even falling asleep during battle and healing up while out of action. These moments occur randomly, but frequently and are rarely never helpful, it really is a very Mii-like take on RPG systems.

The actual opening of the game hits you with event after event introducing gameplay elements bit by bit. After the whole job shebang you’re taught about HP sprinkles, which you can use to keep your HP topped up until you get a healer into your party, then there’s the MP sprinkles which, you might guess, top up your MP should you start to run a little low. Finally you get a single life sprinkle which grants you a revive should someone die before they finish the area they’re currently wandering through. As you progress through the game saving people’s faces, a counter ticks up, and every time you save another fifty people you’ll get an upgrade to one or several of your sprinkle totals. Venturing throughout the world of Miitopia isn’t a free experience, you’re kept to rigid paths between points, each point denoting a path to venture on, a person or event to see or a town or location to visit. Quest paths see the heroes walk along a linear pathway broken up by the occasional fork which you then need to choose the direction, enemy encounters or chests are infrequent, but the rewards for either are decent enough to warrant multiple travels through to gain whatever spoils you can. At the end of each of these are conveniently placed inns, and yes, we’re talking very convenient. They crop up along paths, in caves, towers – they’re everywhere, like Starbucks. Here your party can buy gear, gamble, and most importantly make friends.

The twee existence of Miis and Nintendo’s insistence that they’re friends is an important part of the game, maintaining their relationships opens up new abilities for them to use in battle. Friends call out to each other to warn them to dodge attacks you see? And only if people are friends do they assist one another during an attack to deal extra damage. What you get here are essentially free turns and all for ensuring that your Miis become fast friends. It’s a good idea to chop and change them around a bit as well, making sure that everyone is friends with everyone means that these special events become more frequent, and also allow for multiple helpers. Three people assisting on one attack means more hits and thus more damage done, it even helps with healing and damage spells!

You’ll need to monitor those relationships as well. As with any lengthy road trip, tempers can become frayed and people can fall out. Me and Revatar are buddies, but we fell out during one particular journey, and conspired to get in each other’s way in battle; the only way to rectify this was to put us both in the same room until the animosity went away and we were friends again. You might not make the same decision, as while there are negative effects to fallouts, they can sometimes have positives.

Where things are wrested away from you somewhat is in the overall control of your party. In battle you can only decide on what the main Mii (most likely your own one) does. During exploration you watch as the party walks, only stirring to choose a direction or open a chest, and at the inn when it comes to buying items you give the Mii money and it’ll go off to buy whatever it is that they’re after. They might come back with a snack item instead at which point they’ll give the remainder of the money back to you, but you’re never really in direct control of any of them, making this kind of like a management sim rather than an RPG. What’s good though is that a lot of work has obviously gone into the AI of the party, as they very rarely make the wrong decision. Heals are done in a timely manner, and healers only attack if party members are safe from death, you might find that some attacks used are a bit overkill, especially in regards to MP cost to effect, but rarely will you find yourself struggling to deal or mitigate damage.

It’s all held together by a UI that looks handmade. EXP and gold gained badges fold onto the screen like origami, while world landmarks pop up like elements from a pop up book. All the costumes as well have the air that they were made for people playing make-believe rather than for heroes embarking on a quest, sort of like you’re playing a storybook; and it’s this feeling that gives the game its appeal.

A full game of Miis had the potential to be just plain annoying, but I’m pleased to report that I have never been more wrong. The child-like nature of the humour to the way it’s all framed exudes a playful nature that’s missing from so many titles these days. There’s a deceptive amount of depth to the systems at play here that you may not really understand how until you’re into double digits of play time, and that’s a milestone that just breezes by, despite the sheer quantity of times the game asks you if you’d like to take a rest.

I don’t know, maybe I’m going soft; but I’ve gone through Hey! Pikmin and now Miitopia and they’ve just succeeded in giving me playtime that’s just been lovely. You may not be very hands on in the overall scheme of things, but Miitopia is not only an RPG for those that have never played one, but also one for those who could do with something a little more lighthearted.

Miis aren’t for everyone, but Miitopia is easily the nicest and most accessible RPG ever made, and for that it deserves considerable praise.