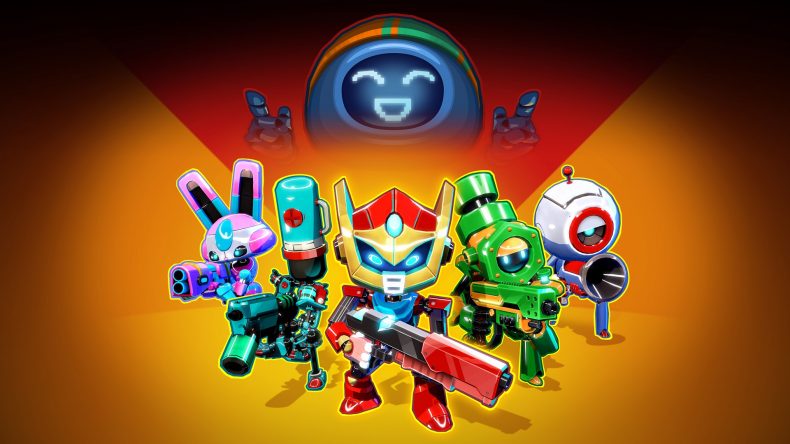 It’s amazing to think that it’s been five years since Velocity 2X was released. Granted it’s only been a year since the game came to Nintendo Switch, but it still feels like ages since we saw anything from Futurlab, but that’s because I’ve only just got a VR headset, so I missed their other game Tiny Trax. Now, I have PSVR I’m able to see what else they’re up to – and this time, it’s little robots.

Mini Mech Mayhem is a multiplayer tactical board game, and will have you facing up to three opponents fighting for control of a game board that changes every time someone manages to capture the Victory Square. All things considered though, ‘Mayhem’ is probably too generous a word here. There’s a distinct order to proceedings and as such it’s probably a little too structured to elicit a feeling of chaos; but what is here should surely result in an entertaining time between friends, although I have to wonder how it would go with randos. The game takes place on a 9×9 game board with each player sitting on their own side. The tiles will spawn in a randomised fashion giving you regular tiles you can walk on, an energy orb, the Victory Square, and several hazards. You’ll choose three moves to make your mech do what you want it to do, and it can move in one of four directions by up to six tiles, or it can shoot in one of eight directions, targeting one of six body parts each of which having a different effect should you shoot it. You’ll never know what moves your opponents are playing until everyone has submitted their choices so you’ll need to think about how your opponents are situated on the board, plan for whatever actions you think they’ll perform and aim to outwit them and claim the three victory points required to win the match.

As well as moving and shooting, your mech can perform moves known as ‘Intercepts’, which can be activated on either your turn, or an opponent’s. Use these moves wisely and you can either give yourself the edge or completely mess up your opponent’s turn. These little doohickeys range from taking an extra step on a mech’s movement to other little things like rotating a shot either clockwise or anti-clockwise, or even calling in an air strike. These little moves however cost energy to use, and this can only be gained by picking up energy orbs which randomly spawn on the board during each round. The value of energy for usage varies considerably depending on the effectiveness of the move, so you’ll need to consider which ones you use and when to use them.

Each move has a certain ‘cost’ to it as well. This is separate from the energy for Intercepts and this cost determines who moves first on which turn. Moving tiles will cost however many tiles you’re moving: if you’re moving six tiles your movement cost is six for instance, while one tile will cost one. Shooting is different: if you’re doing a shot to the body the cost is one, a limb is three, and a head shot is six. The reasons for these values is because shooting the body just deals damage, while shooting an arm will rotate the mech’s next shot depending on which arm you hit, similarly shooting a leg will rotate that mech’s next movement. Finally a head shot will knock a mech back a tile, useful for sending them into a hazard for a kill and a victory point. If a movement or a shot costs the same then the movement always goes first, but if two mech’s do an identical move on the same turn the one with the lowest overall movement cost for their entire turn will go first. It sounds complicated, but it’s actually really simple. There are a lot of facets to every move you make here, meaning it’s prudent to try and use low cost turns and try and take the advantage with a well timed Intercept. High cost moves are incredibly risky, if they come off you’ll gain a considerable advantage, but similarly you’ll find that move will probably go last making you incredibly vulnerable while you await your mech’s turn.

Victory points can be obtained by either capturing the Victory Square or by directly destroying an opposition mech, although it should be noted that destroyed mechs will reappear after a turn, something I didn’t know. It doesn’t exactly make you play tutorials, but if you don’t then many of the games intricacies will be alien to you. The thing is, even if you do then some of the games intricacies will still be alien to you. There are ten tutorials all in all, each with three sub challenges and while many are easy, others require significant thought and often a bit of imagination. There’s one challenge late on that I spent the better part of a day obsessively trying to work out and it was only after I attempted a single player match against bots that I realised what needed to be done, because the tutorial hadn’t stated I could shoot energy orbs to collect them. There was an immense cry of exasperation when I finally figured it out. I unfortunately haven’t been able to try out online yet, but will continue to try it out and see if I can get a game, as this is definitely something that’s going to be better against others. The fact it works as a sort of turn-based strategy means that no one gains too much of an advantage from a better internet connection, although I feel it would still work as a game outside of VR. As an aside this game did give me the worst feeling I’ve ever had in VR when upon restarting my game from the PS4’s rest mode the camera was fixed, so if I moved my head the image didn’t move with it; it was a very odd feeling and most likely an isolated bug, but I never want that to happen again.

Mini Mech Mayhem has bags of charm despite not having any real characters to speak of. The television-faced robots that represent the players have a range of emotes they can display, and the mechs have some delightful little animations. The thing is, this is a game that’s going to live or die based on the player base, not so much from a briefing perspective, as you’re pretty much fixed in your place, but if it cannot maintain a dedicated player base it’s going to flounder. On that note it’s worth mentioning the lack of locations, hazards, and different types of weapons; you know, things that would give the game a bit more variety, instead it’s up to the players to be that variety, and I don’t think they’re really going to go for that.

Miniature mechs minus the mayhem, Futurlab’s newest is bursting with tactical depth, yet lacking in variety.