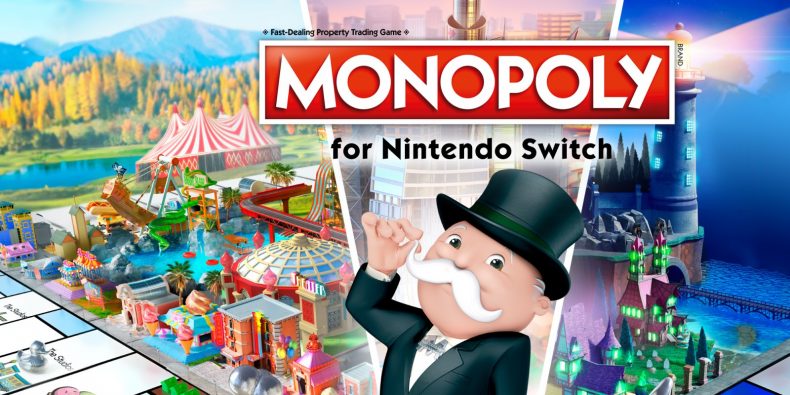 What is there that can possibly be said about Monopoly that hasn’t been said? Hasbro’s property trading game has been around for generations, there’s more versions than you could possibly name, and for anyone who doesn’t play tabletop games it’d probably be the first game on their list if they were asked to name board games, not that people go around asking perfect strangers that, unless it’s for Family Fortunes or Pointless.

There’s always console versions in each generation too, although, while I know of their existence I don’t know much about their commercial success, they must do ok to warrant the constant output though surely? Anyway, Asobo Studio is bringing the iconic boardgame to Nintendo’s Switch and first impressions weren’t good. First time I tried to load the game I spent minutes waiting before I believed that it just wasn’t going to load and I gave up and played something else. The next day in discussion with another writer it turned out the game would eventually load, but it would be upwards of six minutes, turns out that was right. After a while playing with these dreadful load times and getting immensely frustrated I took to Google to find another publication had been told to restart their Switch. Once done load times were drastically reduced, no idea why, but hey, at least I can play it.

You’ll be coughing up thirty bones for this version of the game, which is considerably more than what you’ll pay for the boardgame itself. For your money you’ll get five boards which consist of the classic board and a Rabbids themed one, but also here ‘live boards’ which are themed around a city, an amusement park or a spooky scene. The layouts are generally the same, just with the place names changed, but the live boards are nice to look at with a lot of animation and detail to the scenery. There’s a cost to this though as the framerate struggles constantly, strange as even with all the moving parts it isn’t really graphically taxing.

There are a host of rules you can play on any of the boards, from setting stringent win requirements like hitting a certain amount of money to being the first to build a hotel, there are other stipulations too, like fines collected being distributed to whoever lands on Free Parking. Overall there’s a considerable quantity of ways to play, but none of them really change the game at its core, whether that’s a good or bad thing depends on if you find Monopoly to be boring or not. The thing is, Monopoly is a slow paced game as it is, here it’s even slower as turns can take ages to pass from one person to the next. The screens to manage your properties (placing houses and the like) are incredibly unintuitive, making upgrading your locations a terrible chore to do and at the end of the day is it’s Monopoly, there’s little scope for broadening it at all.

Monopoly for Switch is cheaper than the majority of Switch titles, but is still expensive for what it is, granted the facility is there for playing the computer or online against other people, but the game is so much better played in close proximity to others, and for that the boardgame is preferable and cheaper, at least it does what it was designed to do. It was shaky at the start, but this is a competent yet unnecessary version of the game; it’s not bad, but it isn’t worth the cost.

A decent replication of the game
Plenty of rule variations

Slow and steady like the game itself, but a virtual experience can’t live up to the real thing.