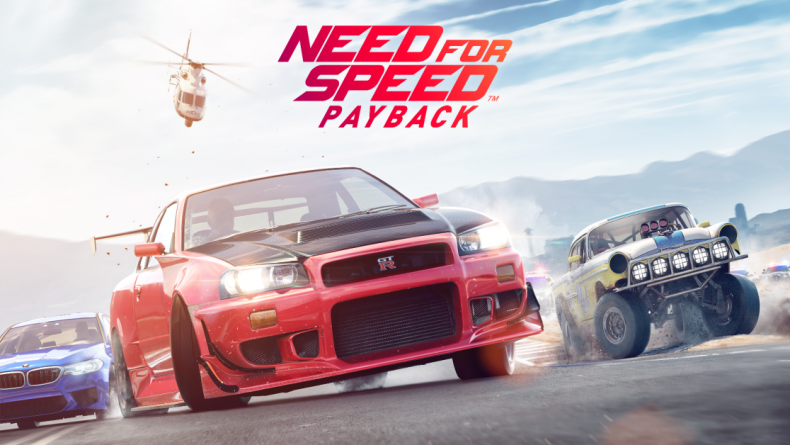 I’ve never been so happy to be wrong about a game. When Need For Speed Payback was announced and shown at E3, I wasn’t exactly happy with the direction Ghost Games looked to be taking the franchise, especially after the rather fun 2015 reboot. That last game went back to the core of what had made Need For Speed so popular: Underground. It wasn’t quite the same, true, but it had charm and it certainly started the series back on the right road. Payback’s initial showing, with that truck chase and all the explosions, just looked like a sad attempt to cash in on the Fast and Furious brand of action-racing.

The reality is very different.

Our story begins in Fortune Valley, a place that is not-at-all supposed to be Las Vegas, and our plucky crew of heroes is about to rip off some rich guy in a suit, pretending to race in his prototype car but really they’re about to steal it. Thing is, something goes horribly wrong and our stereotypical white dude named Tyler and his crew are betrayed, the prototype car delivered to ‘The House’ in the process. Tyler is obviously a bit miffed about this, so he vows to get payback. That’s the scene set, then. This rather basic revenge plot requires more than just rushing in blindly, because The House owns Fortune Valley, rigging street races for its own gain. So you’re tasked with turning things around from the bottom; competing in races and winning over the heads of the city’s crews (known as leagues). Each league drives in a different race class; Race, Offroad, Drag, Runner and Drift; each encouraging a very different style of driving. Once you complete the current league events, you’ll unlock a new story mission, which switches from the street-level races to the explosive action shown in that initial E3 footage. The first of which is that very same truck chase shown back in June, and it’s a lot more fun than I gave it credit for.

You might be worrying that it’s all sounding a bit by-the-numbers; a bit linear maybe. Not a bit of it. Between missions and races, you’re absolutely free to drive around as you like. There’s a real feel of Forza Horizon in this freedom, but the handling is much more Burnout Paradise. Bringing together the style of both of these genre giants is a masterstroke, especially with the gaping hole left by Burnout’s absence in the market. Remember the billboards and collectibles in Paradise City? They’re here in Fortune Valley. How about the Barn Finds in Forza Horizon? Yup, they’re here too, in the form of derelicts. You’ll get a clue to the whereabouts of one of these upon beating a league, but once you find it, you’ll still have to track down four more parts for each vehicle in order to use them. From there, you can upgrade them to supercar status.

Vehicle customisation has been at the heart of every Need For Speed since the Underground days and it feels like Payback is the culmination of that. It’s not simply about bodykits anymore, or NOS; in fact, the entire system has changed to something that may upset a few folk. You no longer upgrade parts like you would in any other game of this type, instead you’ll be relying on Speed Cards. These effectively upgrade your car’s various parts, such as the engine block, gearbox and brakes, but each card has a level. This is touted as a ‘CarPG’ (geddit? It’s like RPG but with cars!) and these cards are almost like EA’s way of injecting Hearthstone into Need For Speed. It doesn’t make sense and it’s a bit redundant, but it still works to some degree. You’ll still find yourself wondering why you can’t simply buy car parts, though. But look, this game is mostly about the driving and that’s pure Burnout. The handling is fun and arcadey, easily allowing you to drift around Fortune Valley even in the fastest cars. Each car type handles differently; drift cars slide around more easily, drag cars don’t corner too well but they do wheelies as they accelerate obnoxiously, and general race cars are good all-rounders. Thing is, you’ll enjoy the speed with which each one moves around the city, and when you get into police chases things get really fun. That’s right, takedowns are back and man, are they glorious. There’s nothing like the feeling of slamming a chasing car into the path of oncoming traffic and watching them literally crash and burn. The racing can be a bit irritating at times however, thanks to the inclusion of that most horrid of arcade racing staples: rubberband AI. In this day and age, there’s no excuse for it and it just gets annoying when your car level easily exceeds the recommended level for your current events, yet you’re constantly pestered by opponents that almost never get left for dust. Luckily, it doesn’t ruin the experience most of the time, but it really isn’t a welcome addition.

Need For Speed Payback doesn’t really set the genre alight, but it’s the closest we’re likely to get to a new Burnout game. It’s fun to play; mixing various racing events with the explosive set pieces of its proper story missions, while providing a nice backdrop for free-roaming throughout Fortune Valley. The story is nonsense, but when has it ever not been? Just buckle up and enjoy the ride, because Need For Speed is well and truly back.

Need For Speed Payback may not do anything new, but it brings together elements of Forza Horizon and Burnout Paradise to create a fun and explosive racer.