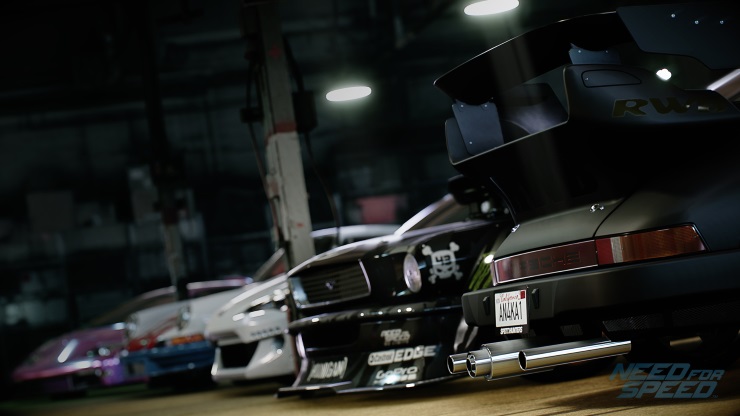 If ever there were something that typified style over substance it would be the latest iteration of Need for Speed. After a few humdrum entries, Ghost Games has looked back to the series’ early glory days for inspiration. The huge range of modifications you can make to your car are back, there’s a film-like effect to the graphics, FMV scenes that don’t completely suck, and liberal use of the word sick. By all accounts it should be an entertaining driving game, proving decent at heart, but very hard to love.

One major selling point should be the customisable handling. Ranging from Gran Turismo levels of grip through to Ridge Racer sideways sliding madness; any racing fan is accounted for, with the adjustments made by setting sliders on various individual options or via a master slider at the top. This should be great, allowing you to tune handling to how you like it and quickly changing it for the different events on offer. In practice, however, no model seems to completely work, with the extremes either being prone to causing your car to snap back in the opposite direction to your steering input, or causing massive over-steer, while the settings in between mixes the issues. Not that the crashes these cause will be too much of an bother, because there is rubber banding that makes Mario Kart look like a sim. No matter what car you’re in, you’ll be able to keep up with your opponents, but get too far ahead and they’ll soon catch up. Rather than make for close racing, it just makes the racing incredibly dry, with the AI all in a big clump you’ll pass at the start, and only one or two splinters to deal with later on. As you progress this lessens somewhat, but only after a good few hours.

In fairness, this only applies to about half the challenges you’ll face in Need for Speed’s open world city, the rest being drift challenges. While these are more fun, forcing you to deal with the looser side of the handling model is still a little frustrating, and after a while they become a little samey. That said, the Touge events (which see you score more points the higher up the field you are) are a genuinely thrilling highlight, demanding a blend of your racing and drifting skills (sideways isn’t the quickest way around a corner, kids).

While the basics are passable, the presentation on top is far more impressive. It looks gorgeous, with wonderfully rendered cars, and the streetlights and rain dancing on the cars when you’re driving out and about is incredibly impressive. It’s all rather pretty as you sit behind the wheel of your disgustingly expensive shiny car.

The garage of cars at your disposal is equally impressive. Starting off you get to pick one of three cars ranging from an old Honda to the Subaru BRZ. Immediately you can paint it however you want and cover it in a wealth of decals. As you race you’ll unlock new body parts, and you can tinker under the hood to make improvements to improve brake ratios and increase you BHP. Save up enough and you can buy new cars, with the Nissan GTR and Ferrari Italia populating the top end.

The FMV sections aren’t as impressive, with less than brilliant acting and questionable scripts. To be fair though, it isn’t bad, even if you will want to punch the imaginatively named Spike in the opening twenty seconds. The narrative isn’t massively important, more adding a sense of camaraderie to the races rather than facing off against nameless drones that only exist for each race. In between scenes they’ll ring you up to invite you to their next race, a nice touch, although your phone does not stop ringing, even during races, which gets old very quickly.

It wouldn’t be a Need for Speed game without the cops, and they’re here in abundance. If they see you breaking the law they’ll chase you, whether you’re in a race or not. You can either pull over and pay an on the spot fine, or try and outrun them – although if you get busted in the latter it means a much larger fine and resetting to your garage. A pleasant distraction, sometimes they can be incredibly hard to shake off, and longer chases see colour drain from everything but your car and the police’s flashing lights – a cool stylistic choice but a pain in the arse for navigating a city at night at speed.

Meanwhile, the requirement for NFS to be always online is questionable. Sure, other players appear in your city, and if you can catch them you can challenge them to a race, but they didn’t seem to add much to proceedings.

It sounds like I’m being incredibly harsh on Need for Speed, but it just doesn’t do enough to truly excite. It’s a perfectly serviceable racer with great looks (which is expected from racers nowadays), plenty of customisation options, and passable driving, but it’s a real shame that latest reboot of this franchise had the hallmarks of the greats in the series’ past and could have been truly special. While it’s not bad by any means, it’s just plain old “decent”, and that’s not really enough with the competition out there.

A perfectly serviceable racer with great looks, plenty of customisation options, and passable driving, but it’s a real shame that latest reboot of this franchise had the hallmarks of the greats in the series’ past and could have been truly special.