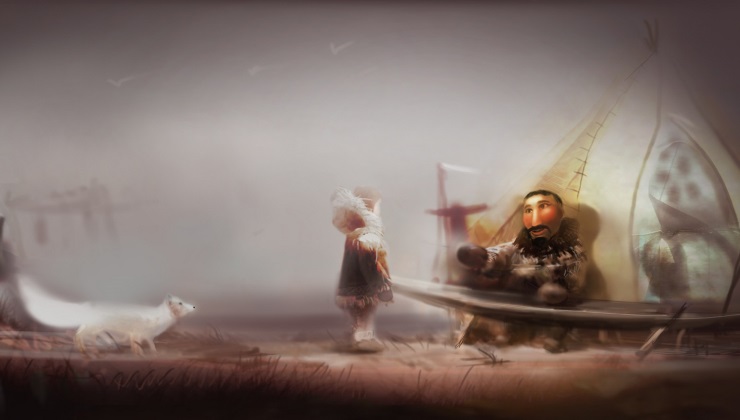 This medium doesn’t have a great track record when it comes to respecting people of certain cultures or backgrounds. Authenticity is disregarded in favour of a stereotypical view, or one that’s just lacking much (if any) research. It’s clear that Never Alone is respectful of its origins, yet it manages to deliver a story that outsiders like I, and possibly you, can enjoy.

The Iñupiat are an indigenous people from Alaska. They’re hunters and gatherers; effectively a self-sustaining group that live in the harsh conditions that the US state can offer. Never Alone (or Kisima Inŋitchuŋa) replicates this as a little girl named Nuna and her arctic fox have gotten caught in an extreme blizzard and now find themselves away from her village. The Iñupiaq girl and her doting pet must find the origin of this snow storm, but not before running into a few obstacles along the way, in this puzzle-platformer. Using Alaskan folklore as a base, Upper One Games have created a lovely coming of age story as the unlikely duo face all manner of challenges, both inanimate and otherwise, whilst never losing site of their friendship.

In addition to this, there are contextual videos that offer an insight from real-life Iñupiat people. Throughout your time with Never Alone, you’ll come across owls that are perched upon different things. Most are easy to find, while some are slightly off the beaten path. Upon discovery, a notification will appear, allowing you to watch one of twenty-four short videos that relate to something you’ve just witnessed. Due to the length of Never Alone, these will pop up quite frequently and if watch as they appear, this can break the momentum of play. Not often, but they can also sometimes reveal certain things in Never Alone, before you encounter them, in-game. In saying that, though, they’re fascinating. It’s always interesting to hear these stories from people that are far removed from our life of hustle and bustle. Some of them historic, some of them cultural, and they’re always engrossing. However, do watch them as you finish each chapter, for the reasons outlined. In terms of visual delights, this is one of the year’s highlights, despite it leaving the colour wheel out in the cold. It’s a testament to the art design that blues, blacks, whites and greys are the main choices on your optical menu, yet with what could be perceived as a lack of pigmentation, Never Alone is alive with personality. A lot of that is down to the unique character design – including the minor players, as well as the primaries. When a splash of green or yellow appears on-screen, it’s strangely captivating as it’s a rarity. Genuinely stunning.

As the camaraderie between the two is so strong within the story, the best way to play Never Alone is co-op. With one player taking control of Nuna and the other taking on the role of the fox, puzzles are more easily solved. It’s not that any of them will bamboozle you, because there’s nothing in here that’s overly challenging, but when playing solo, certain things can be a bit trickier and generally clumsier than one might like. This is because in single-player, you are in control of both characters, switching between them with the press of a button. In one section, Nuna must push a crate over to an area, in order for her fox to reach a higher ledge. But the crate is on a slope, so it’ll begin to free-roll when you switch to the fox and attempt the jump, because Nuna is no longer holding the crate in place. Generally, when in control of either character, the other one will follow you, which can result in some annoying deaths: you make a jump over a large gap, but your buddy doesn’t quite make the jump and falls to their death. These frustrations certainly sully the whole thing because when Never Alone works, it’s a joy. Not only will you face the odd puzzle here-and-there, but you’ll also have a handful of enemies to deal with in different ways. Sometimes you’re fleeing for safety, but other times you’ll have to call upon your trusty bola – your projectile that can be used to fend off all manner of threats. By holding back on the right analog stick and then pushing forward in the desired direction, Nuna will fire the bola with all her might against fragile ice, polar bears, or whatever you so wish. It can be slightly awkward at first, as directing the bola isn’t as smooth as it could be, but with some practice it becomes a useful tool.

Never Alone’s greatest strength is also its weakness. The story of Nuna and her arctic fox is a beautiful tale that is full of emotion, but when implemented in-game, it can get cumbersome. Switching between the two is fluid and in a solo playthrough, it works more than it doesn’t, but when it falters, it’s a cause of aggravation. In saying that, when you and a friend decide to take on the blizzard together, it’s superb. This wonderful story and real-life insight into the Alaskan natives is a wonderful tale of triumph over adversity, especially when your friend is by your side.

Awkward controls, at times.
Some puzzles are overly simple.

Even with some hiccups when playing single-player, the attention to detail in this beautiful story all about friendship is bliss.