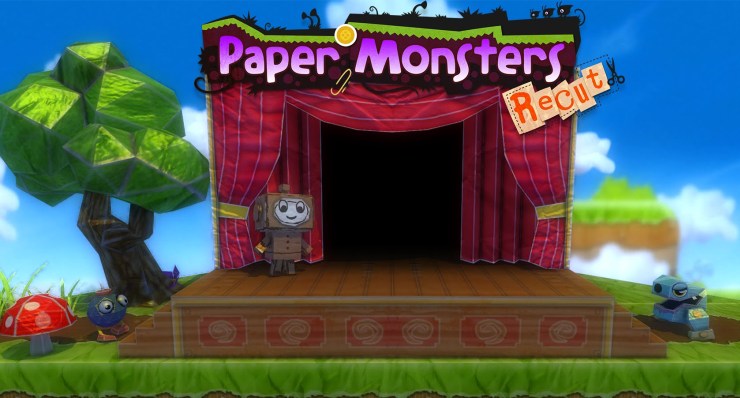 Paper is a versatile substance. You can draw on it, fold it into origami sculptures, print books onto it, you can even use it to wipe your backside. Games like Nintendo’s Paper Mario and Media Molecule’s Tearaway have used the ideas of worlds and characters made out of the stuff and given us some great experiences. Now Crescent Moon Games line up with a port of their iOS platformer Paper Monsters, fashioned by Mobot Studios into a “Recut” version for the WiiU.

So in Paper Monsters Recut you’ll find yourself jumping over holes, obstacles and onto enemy heads across 6 themed worlds. Along the way you will attempt to collect three paper clips and one gold button per level as well as as many regular buttons as possible. Collecting one hundred regular buttons per level will grant an extra life, or you can pick up one of the many 1-ups hidden throughout. Per level you are granted three hearts – lose all three and you lose a life. It’s all extremely cookie cutter. While this is an up-scaled iOS game it is using the extra power of the WiiU to improve the look somewhat. Textures are sharper, and some of the lighting effects look pretty good, but the initial charm of the paper-craft characters wanes quickly as models are repeated or revised. At busy times (I’m generous with the term busy) the frame rate can judder horrendously. It wouldn’t be so bad if we were talking about particle effects and monsters flying everywhere, but we’re talking two level planes and a handful of enemies. Considering the game isn’t a graphical powerhouse this problem doesn’t really make much sense. While the music and sound effects are inoffensive but forgettable, over time I barely even registered they were there at all.

Some of the enemies you can kill by jumping on and some you can’t, although this isn’t always very well communicated by the designs. Some of the collision detection is so woeful that landing on them can randomly be deemed as either a kill or a heart lost; hell, I had several moments where I took hits despite being a good inch (in terms of screen space) away from my so called assailant. There’s also no grace period between one hit and the next, so you can find yourself losing two hearts in quick succession if you are just a little out with your timings, which will happen due to the controls being so fiddly. Level design is interesting in some regard. Using front and rear level planes, and never asking too much of you in regards to backtracking to seek out the hidden items. It’s obvious where its inspirations lie, what with you jumping into pipes to move through levels and columns of fire rotating around some platforms but it’s all so uninspired. There’s so much you could potentially do with the world and characters in it being made of paper but it’s a theme that’s never capitalised on. Some enemies and obstacles on the back plane can be obscured by ones on the front making you lose health and lives rather unfairly. There are also several niggly precision jump sections which had me (figuratively) chewing on my controller in frustration. If it’s like this on a proper controller, what must it have been like for people on iOS?

Paper Monsters Recut is available on iOS for 69p, but on WiiU it’ll cost you £5.49. That in itself is an unjustifiable price discrepancy for what you get. On a system that plays host to some of the best platform games money can buy Paper Monsters Recut seems superfluous, and it is. I would find it hard to recommend this to anyone other than hardcore fans needing a new platform-game fix.

There are many better indie games on the WiiU, don’t waste your paper on this one.