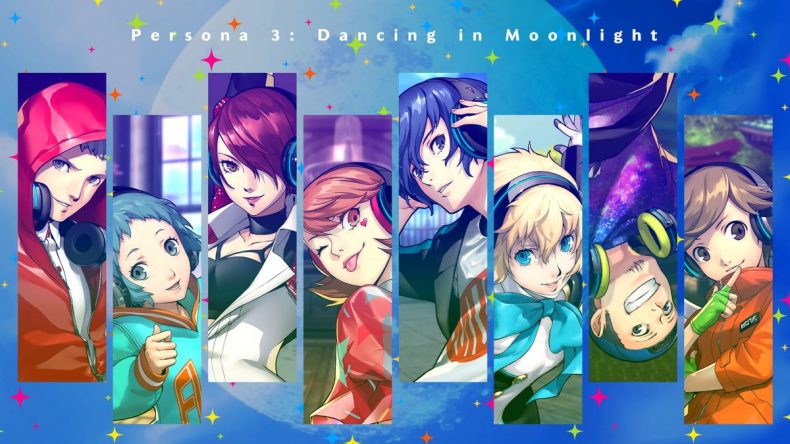 After the success of Persona 4: Dancing All Night there was little doubt that Atlus would try to do the same for their other popular Persona titles and that’s where we are with both Persona 3: Dancing in Moonlight and Persona 5: Dancing in Starlight. Instead of going PS Vita only, these two release on both PS4 and PS Vita in North America and Europe months after debuting in Japan on the same platforms.

Persona 3 is a very special game. It introduced the Persona franchise to a ton of new people on the PS2 and saw an enhanced release there before getting a brilliant PSP release with new content. Since the game has been the oldest of the lot, this rhythm game has done a ton of great stuff for Persona 3 fans. The core dancing gameplay here is nearly the same as it was in Persona 4: Dancing All Night with one addition. Notes fly out from the middle of the screen towards the targets on each side, and your aim is to input the current note type button combinations with correct timing. Double notes are new to both P3D and P5D and they feel pretty pointless because you can already have two single notes after each other that feel the same for the most part. Hold notes, fever time, and all the other mechanics in Persona 4: Dancing All Night make a return. While that game had a story mode that was hit or miss for fans, things are very different here. In addition to having less songs in the base game, there isn’t a traditional story mode.

That has been replaced by a Social mode that has visual novel sections split up into various chapters per character. You unlock them by fulfilling various conditions through gameplay like clearing a set number of songs or using different costumes. If you want to see everything, get ready to play all the songs on multiple difficulties. I had a blast with the social section here because I can’t get over how good the Persona 3 cast looks with these high resolution character models. The problem with the story mode is how grindy it gets to view all the events. You need to replay songs on different difficulties and since I did the mall on Hard at first, I had to play many on lower difficulties to unlock more Social events. As you unlock more Social events per character, you get to explore their rooms and the last three levels for each character contain hidden object minigames that reward you with more cosmetics. Persona 3’s soundtrack is very unique. While most JRPGs went for a grand orchestral score, Shoji Meguro et al blended various genres well and Lotus Juice’s rap is timeless. Persona 3 has had an arrangement album, multiple movie releases, 3 sets of game soundtracks, and this has led to a great selection of music (albeit a short list compared to P4D) that represents the Persona 3 brand very well. The great thing about Persona 3 is all the standard game music works well here. Mass Destruction is a classic and Atlus even included music from Persona Q, here which gives it another advantage over P5D’s tracklist.

Visually, this release will only make it harder for everyone to go on without a Persona 3 remaster or remake. The cast has been brought to this generation very well. The UI for P3D uses a lot of the signature Persona 3 blue well and, while I’m disappointed with the amount of content in this release, this definitely feels like a true release in the Persona 3 family of games (yes, it feels weird saying that but here we are). Make sure to spend time in the character viewer giving Junpei the dumbest outfits. The one visual flaw that affects gameplay is the blue scratch note rings that should’ve been another colour since normal notes are blue here, and it’s annoying when two different notes are the same colour. Given how many times fans have been able to buy a physical copy of Persona 3 or a game with Persona 3 characters, it would’ve been great to have one for the Vita release of Dancing in Moonlight, but Atlus decided to go digital only here. Persona 3: Dancing in Moonlight is certainly the better of both dancing games seeing a release on Vita and PS4 for sure. The upgraded visuals and character models for the Persona 3 cast are great and the song selection is almost perfect. I wish it had more songs in the base game,though, and will definitely pick up a few DLC songs.

Persona 3: Dancing in Moonlight is a fun rhythm game that could've been so much more but still manages to be well worth it for Persona 3 fans with some excellent music.