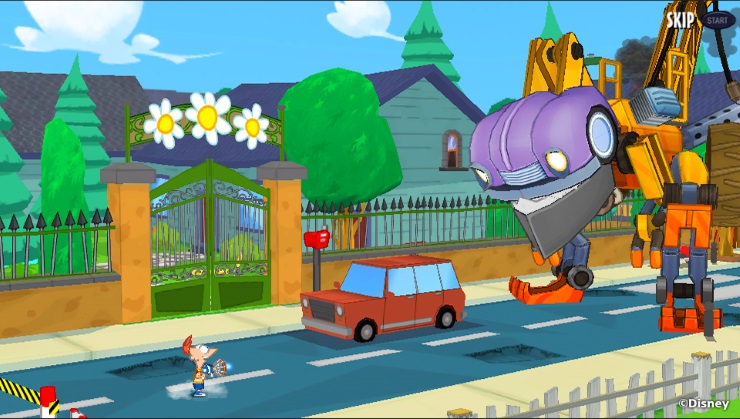 One glorious sunny day, two young boys are watching TV thinking about how they should spend their time, when they see a commercial for a Monster Truck rally featuring the undefeated Truck Chucker. As is the norm for young boys of their age, they decide to build a robot monster car to challenge the unbeaten champion. Unfortunately, an evil villain has created a device to give objects sentience and now the young boys’ monster – Carasaurus Rex – is marauding through town along with a host of household appliances. Ahh, kids these days.

This sort of happenstance is regular for Disney duo Phineas and Ferb, two young boy geniuses who just love to create and invent, but unbeknownst to them, their projects are normally hijacked by Doctor Doofenshmirtz requiring the boys, and their secret-agent pet platypus, Perry to save the day.

Considering the subject matter, it should be readily apparent that this is a game aimed at kids and, more specifically, fans of the show. With this in mind, Virtual Toys – the team behind Muppets Movie Adventures – have at least created a game that aesthetically will appeal to those fans. The game world is bright and colourful, with decent representations of the characters from the show. Although, the recognisable character models aren’t quite up to the standard of the excellently chunky and bold enemy designs, which despite constant repetition never fail to look good. It’s a shame that while enemy types have many moving elements, Phineas’ and Ferb’s mouths never seem to move, their communications coming in the form of arm gesticulations and nodding heads. At least you can recognise them though, I guess. From this point onwards it’s kind of downhill. You see, despite having decent character likenesses the game doesn’t include any of the voice cast – just like Muppets Movie Adventures – which removes any personality the characters had left. It’s also woefully misnamed: Day of Doofenshmirtz’s events are triggered by an accident of the aforementioned doctor’s, and then throughout he is either absent or criminally underused.

Phineas and Ferb’s quest to stop their rampaging monster vehicle takes the form of a platformer with a twin stick shooter mechanic. The boys are outfitted with three weapons which have different properties (physical damage, fire and water/ice), all of which can be upgraded using chips which have to be bought from the in-game store using tokens you find throughout the levels. These upgrades, however, come at the expense of infinite ammunition. And given finite resources, the game’s shooting mechanics end up being shown for how poor they are. The camera is frankly terrible, always picking just the wrong angle for everything. This makes it difficult to aim properly, even when using a second stick for aiming. Frequently you’ll find your shots missing their targets and depleting your ammo as a result. Once the ammo is out, you do at least get the bog standard default ammo for that gun to use ad infinitum, but it’s pretty useless against the enemies in the latter stages of the game. This camera also lets down the platforming elements too, with many jumps easily being misjudged due to the chosen angle. There are a quite a few moments where precision jumping is required and multiple deaths are as such unavoidable. This problem is mitigated somewhat by the fact that you have infinite lives and you are not judged for losing health or dying, but that doesn’t make the frustration any less palpable.

There is at least some variation here. Some levels see elements played out as a side-scrolling platformer; one works like a side-scrolling shooter, and there’s one where you fly into the screen dodging obstacles. The levels are thankfully brief too, with many finishing before they’ve outstayed their welcome. There’s even some replay incentive, as you’re granted a grade for how much stuff you pick up, and replaying levels obviously means more currency to buy materials from the shop, and collect junk for upgrades. Couple this with the extras in the store where you can play an arcade game blasting aliens from a turret, a dancing AR robot and a title screen where you can blow up the enemies and it shows that Virtual Toys have at least learned from their mistakes in Muppets Movie Adventures, which was sorely lacking in stuff to do.

Day of Doofenshmirtz is a combination of a platformer and dual stick shooter which is unfortunately let down on both fronts by an immensely frustrating camera. The game is better when it places you outside of those moments, but that just doesn’t happen frequently enough.

Fans of Phineas and Ferb might get some enjoyment out of this, but platform aficionados might find their time invested better elsewhere.