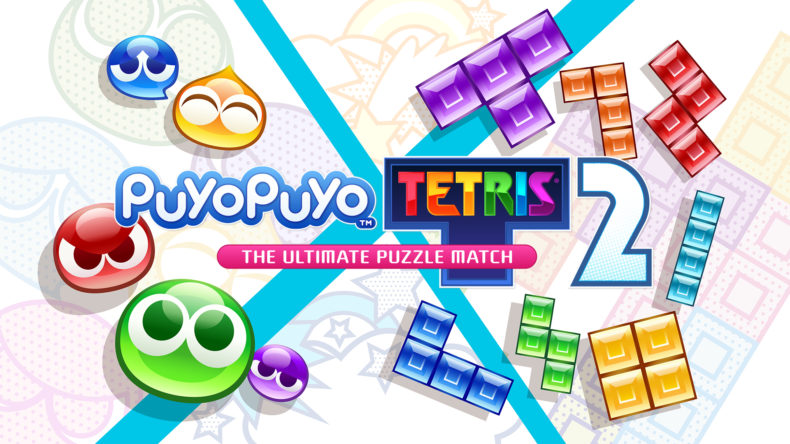 There aren’t many people in this world that haven’t played Tetris at some stage in their life. There probably isn’t a simpler puzzle game that feels as compelling as lining up coloured blocks into columns and making them disappear. Significantly fewer people will be able to instantly recognise what Puyo Puyo is. The franchise mashups of Dr Robotnik’s Mean Bean Machine or Kirby’s Ghost Trap might help remind you of the blob busting puzzler, but I could even talk to my Nana about Tetris and she’d immediately be able to recall us playing together on the NES. These two puzzle juggernauts were combined in 2014 to enable players of each to battle despite playing different games, and now they’re back with more modes than ever in Puyo Puyo Tetris 2.

At its core, Puyo Puyo Tetris 2 is made up of ways to play Puyo Puyo and Tetris. If you’re unfamiliar with either series, these classic puzzle games feature falling blocks or blobs that you need to clear to ensure you don’t fill your screen and lose. In Tetris you’ll have to complete lines by aligning blocks to make them disappear, whereas in Puyo Puyo you need to combine 4 or more of a coloured blob to remove them. Both games have different ways to score more points, so you’ll need to master the art of the Tetris and setting of chain reactions of blobs if you want to beat your friends. 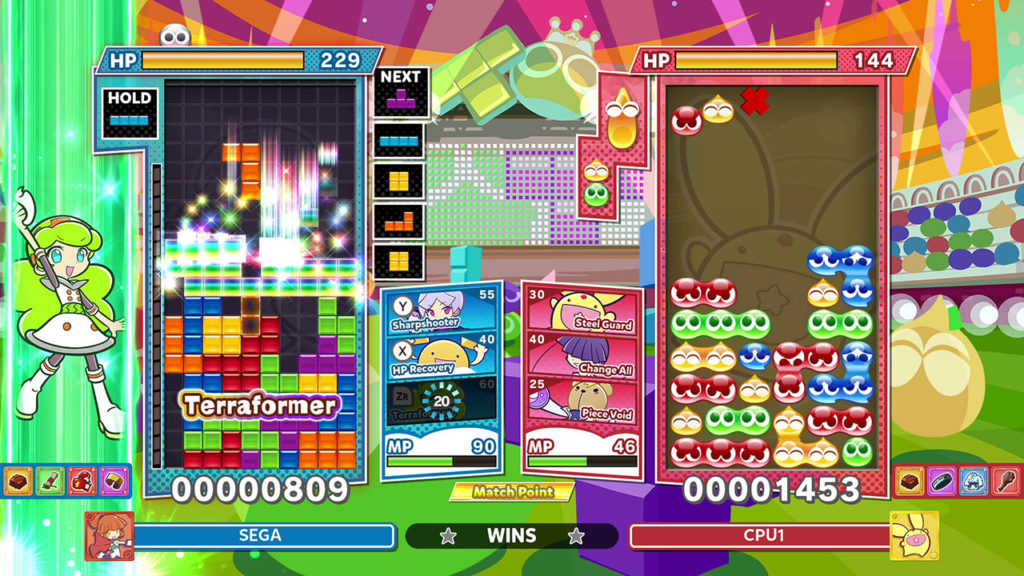 Each time you succeed in clearing some blobs or blocks, you’ll send extra to your opponent. If you’re playing Puyo Puyo you’ll be showered by colourless blobs that only vanish when you clear out adjacent coloured blobs, whereas if you’re attacked playing Tetris you’ll have extra incomplete rows added to the bottom of the screen. If you don’t keep on the pressure you’ll soon be overwhelmed and fill your screen.

The moment you start up Puyo Puyo Tetris 2 you’re greeted with a plethora of modes to play either by yourself or with friends. Maybe you just want a quick game of Tetris to kill 10 minutes, or you want to improve your Puyo Puyo skills to prepare for online with a tutorial. This mashup is happy for you to play the simplest version of each game, or combine them for something much more off the wall.

The best way to brush up on all the game modes is to play through some of the Adventure Mode. Complete with an anime style narrative-crossing dimensions as well as franchises, you’ll follow Ringo, Tee and their friends as they try to find out how their puzzle-based worlds have collided. Each stage expects you to play a different mode against an AI, with optional objectives (such as high scores or time constraints) for those seeking a challenge. The story is a lighthearted romp that wouldn’t be out of place on Saturday morning television, and really helps propel you into learning how to play every game type. 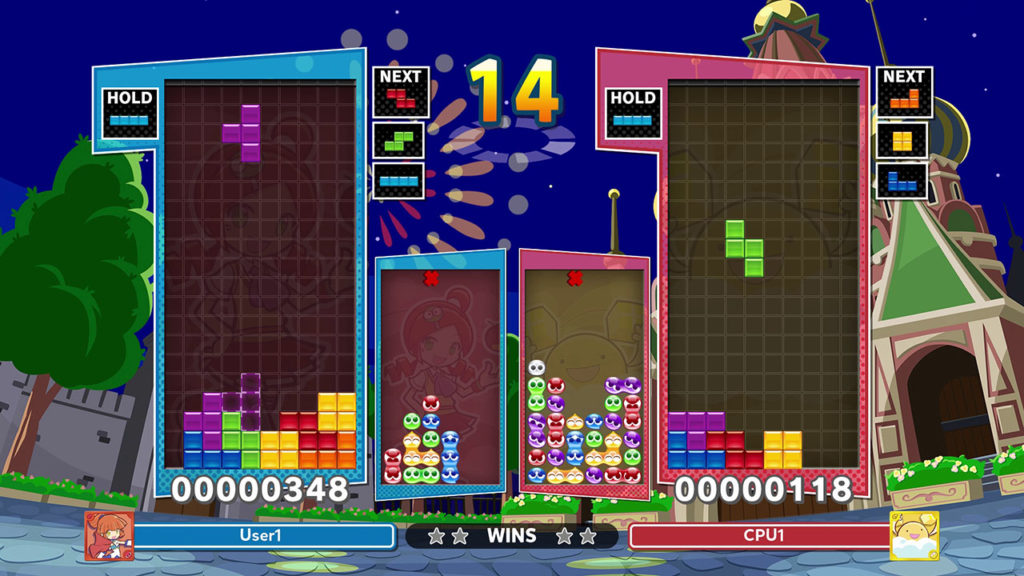 The most fleshed-out mode added to Puyo Puyo Tetris 2 is Skill Battle. In this more complex battle, both players choose a team of 3 characters each with their own special powers. For every line erased or blob deleted you’ll deal damage to your opponents health bar, and the last player standing is the winner. By using your skills you can deal more damage or survive a little longer, with basic abilities like healing or more exciting powers like changing all of the bottom two rows to a single colour. You can play either Tetris or Puyo Puyo with different skills, and battles feel balanced even when playing different games.

Other outlandish game modes include Swap, Party and Fusion. Swap is the easiest to wrap your head around: every 30 seconds you switch between two separate games of Puyo Puyo and Tetris and you can’t lose either. Party features breakable blocks containing power ups that will ruin your opponents day, by making blocks drop faster or stopping them from being rotated. Fusion combined both puzzle pieces at once with intimidating results, with Tetrominoes crushing Puyo blobs if placed correctly. Every one of these games can be played against the AI, or against real opponents locally and online. 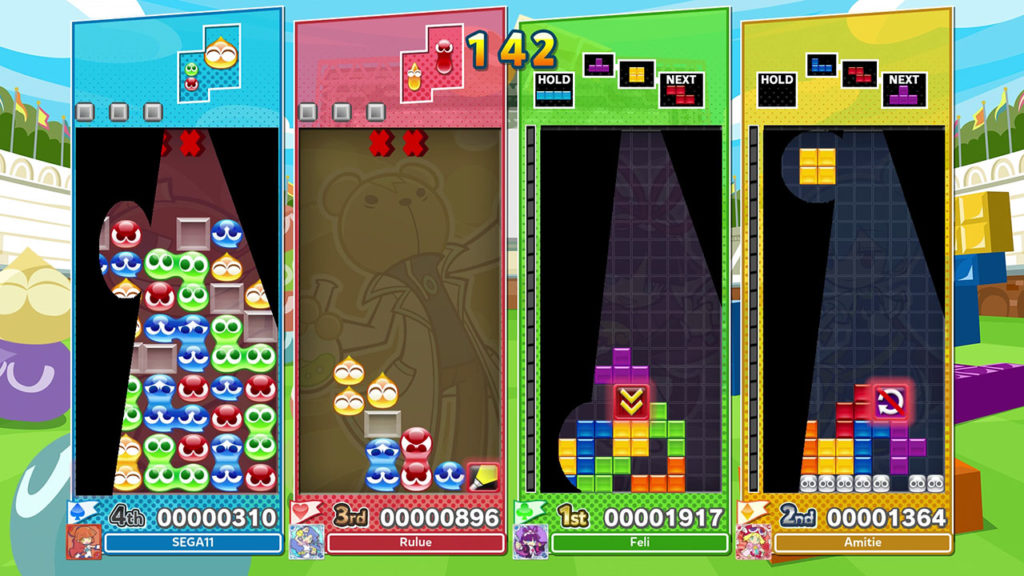 Online play on Puyo Puyo Tetris 2 has been perfect in my experience. Completely lag free and easy to use with friends and randoms. Practically all game modes can be played online, but 4 have their own dedicated ranked mode. It’s a shame the more wacky modes can’t be played competitively, but Skill Battle is available for a less straight laced puzzle experience.

My only issue with Puyo Puyo Tetris 2 is with Skill Battle mode. When playing you unlock equipment and level up your characters, but this means that when playing with others it’s often unbalanced unless you’ve both played for a similar amount of time. At low levels especially you’ll have very low health too, which can mean you barely get chance to play before it’s all over.

There is so much great puzzle content in Puyo Puyo Tetris 2, with both series getting chance to showcase their unique gameplay. Whether you enjoy playing alone, locally or online, there are bound to be a few modes that you’ll love.

Plenty of game modes to play

Lots of tutorials for new players

An incredible package of puzzle gaming content, Puyo Puyo Tetris 2 is full of wacky and serious game modes that will delight players of all experience levels.

Puyo Puyo Tetris is getting a balance patch in August