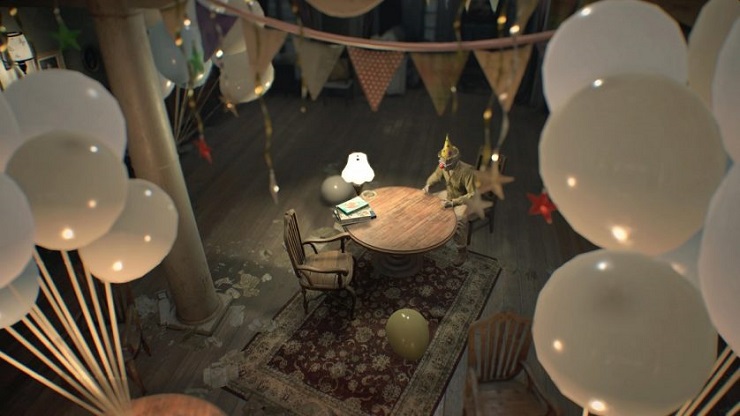 It’s incredibly rare to see Season Passes delivering content so close to release, but mere weeks after Resident Evil VII’s release, not one, but two DLC packs have arrived. Banned Footage Vol.1 was fairly lacklustre, with Bedroom being the only standout episode, but the second part, unsurprisingly entitled Banned Footage Vol.2, is marginally better.

The second volume is once again comprised of three episodes, two of which are canon in the world of Resident Evil VII. The first episode is 21, in which long-suffering Clancy returns, forced into a deadly game of Blackjack by Lucas; Daughters is the second episode, and easily the best part of the entire DLC; and third, the non-canon Jack’s 55th Birthday, is a more comedic episode.

Jack’s 55th Birthday is another timed minigame along the lines of Vol.1’s Nightmare, albeit with less horror (although it can emerge, but it’s more of an action affair). It turns out that Jack really likes to eat and drink on his birthday, and Mia’s the poor sod that has to brave the Molded infested house – and the surrounding areas – to grab all the eats she can find!

This minigame is a lot like the popular Mercenaries mode from previous games, with the aim being to get the highest score possible in a time attack situation. The difference here is that it’s not just about killing enemies (indeed, you don’t necessarily have to kill anything whatsoever), it’s about gathering food and drink, as well as combining them to create more appealing consumables for hungry Jack. Feeding him reduces his hunger meter, and you will receive a rank of C to S, depending on how quickly you complete each stage. Killing enemies does help with this, as kills pause the timer for a short time. The quicker the kill, the longer the pause time, which is absolutely essential to finish with the highest ranking. Unlike Vol. 1’s Nightmare, Jack’s 55th Birthday is a more fun example of a timed game mode. The weirder, slightly comedic element makes it a somewhat lighter affair, almost a safe space to unwind when the oppressive atmosphere of the main game gets to you. If nothing else, the sight of Molded in silly hats will raise a smile.

Next up is 21. After Clancy survived the initial foray into the Baker house, he would soon come to wish that he had died along with his Sewer Gators crew. If it wasn’t bad enough that he was forced to endure the horrors of the basement in Nightmare, and escape Marguerite’s clutches in Bedroom, Clancy is finally given over to Lucas, the sick bastard of the family. And that’s saying something, when you consider his parents. Lucas’ fascination with Saw-like traps and games continues in 21, as he pits Clancy against a stranger in a deadly game of Blackjack.

The main issue with this episode is that it’s a game based entirely around random chance. You are totally at the mercy (or lack thereof, in my bloody case) of the cards, and once you’ve been screwed by luck for the umpteenth time, all the atmosphere is drained from the game. By the time the finale rolled around, I was bored and just wanted it to end. But even then it hits you with a real dick punch, the specifics of which I’ll spare you, as I don’t want to spoil anything for you, dear reader.

21 does at least attempt to change things up a bit, introducing trump cards that offer various bonuses for both you and your opponent. These range from the removal of cards, to being gifted specific cards in order to get closer to the total 21. Again though, random chance plays a part, as my opponent almost always removed my final card whenever I used a trump card to hit 21. Very frustrating.

Although this episode does a decent job of highlighting the unhinged personality of Lucas once again, the cheap nature of the card game, coupled with the sheer number of restarts (some of which brought back memories of “lookit all dat juice” from Gears of War, enduring the same, unskippable speech again and again) just removes all threat from an episode that is intended to be lethal.

Luckily, Banned Footage Vol.2 contains the best DLC episode to date: Daughters. Ever since the Bakers have been introduced to us, there has always been something eating away at me, as I really wanted to learn more about this tragic family. This is the episode I have been waiting for, as we finally see what really happened to Jack and his family, to turn them into the murderous monsters that chased Ethan throughout Resident Evil VII proper.

To be candid, Daughters is very short. It can be finished in 15-20 minutes, but like the Beginning Hour demo, it is made to be replayed. There are multiple endings here, with your first playthrough almost guaranteed to net you the bad ending. But that’s not actually a bad thing (unless you find the bug that occurred during my first attempt, which resulted in me having to restart the whole episode), as you will discover information that leads to finding new things in the second run. Both endings are very good, adding an extra layer of depth to the tragic fate of the Baker family, and absolutely essential for fans of the game and its story. This quality is carried throughout the whole episode. Playing as Zoe Baker, the story begins as Jack brings in a young girl he found unconscious in the Bayou, and you’re asked to find a change of clothes for her. Seeing this soft side of Jack and Marguerite, who insists on making some hot soup to warm up the young lass, is actually kinda heartbreaking, when you know what becomes of them later.

Daughters is almost entirely linear for the first 10 minutes, and largely consists of wandering around the main house (which is weird to see, without all the grime and trash all over the place) to find clothes for the new visitor, and you’ll likely stumble across a few secrets that won’t make sense just yet. You’ll also encounter a more familiar-looking side of the Bakers, just before things are opened up for the final 5 minutes, which feels exactly like the beginning of Ethan’s journey. There are very basic puzzles, but it’s meant to be more of a story-driven episode, with a few chases thrown in to highlight that this is absolutely a Resident Evil horror experience.

As a fan of the Resident Evil series, and certainly a huge fan of the latest entry, Daughters really left me wanting more. It does have some inconsistencies, with regards to certain diary entries found within the main game, but it also leaves a lot of things open to interpretation, much like the full game’s plot.

Banned Footage Vol.2 may have its problems, and much like the first volume it doesn’t offer an awful lot of content for your money, but it does offer an incredible story episode alongside two relatively good minigames. It just makes you wonder what could be done with a proper story DLC, much like the two that are due at a later point in the year.

Jack’s 55th Birthday is a fun, lighthearted minigame with some limited replayability
Daughters is a great example of storytelling
Fills in some blanks from before the main story

21 is based entirely around random chance
Not much in the way of longevity, aside from Jack’s 55th Birthday

The Banned Footage DLC comes to a close with the finest episode to date, in Daughters, but the rest still feels like content cut from the main game.