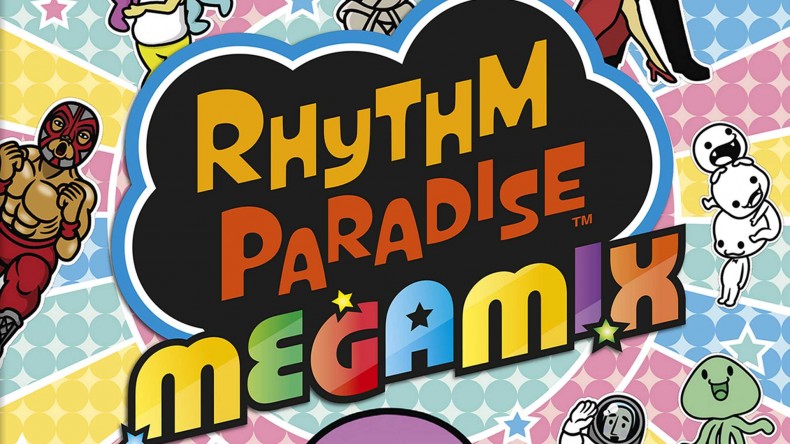 I have a serious soft spot for 3DS rhythm games, right back to importing Osu! Tatakae! Ouendan for the DS back in 2005, and I tell you that because, in part, I want to show off my import credentials, but also because it’s important you know that these kind of games aren’t for everyone. Nintendo are excellent at doing what The Simpsons did in its best years: taking something that is very child-friendly, and somehow making it appeal to all ages, far beyond what it should, and Rhythm Paradise Megamix does exactly this, only with slightly diminishing returns. Being, as it is, a best of collection of the three previous Rhythm Tengoku games, if you’re a fan of the series, you’re going to know exactly what is going on here. Unfortunately, being a greatest hits means that even if you’ve played any of the games in passing, you’re going to have your memory synapses firing as you play the minigames that make up Megamix.

Take Fillbots, for example, Rhythm Heaven on DS. This is a minigame that has you hold the button down to fill a robot with fuel, some large, some medium, in time with the music. The better you do, the greater your score. The second I played it, I knew what I was doing – I’ve played it before. Or there’s Rhythm Tweezers, where you have to pull the whiskers out of an onion man’s face in time with the music. I’ve played that too, and in a sense, we’ve all kind of played all of them, because they are all very similar. There’s little variation in how you actually play each challenge, and the difference only comes from the music and the visuals.

Now look, that may be a harsh criticism, because that’s a music game, really, isn’t it? Whether it’s Guitar Hero, Rhythm Paradise Megamix, or Amplitude, you’re doing the same thing over and over, only to a different song. But here it feels ever so slightly draining at times, because it’s just the same minigame from years gone by with better quality visuals. It doesn’t stop it being fun, of course, and there are new games as part of the package – as you’d expect. Fruit Basket has a catchy, jaunty tune playing as you punch various fruits from the ground into basketball hoops. It’s actually challenging, too, to get the timing spot on, which is welcome, because elsewhere the initial playthrough offers a low difficulty barrier as you play through the daft story, which sadly offers itself and more of a barrier to getting on with the actual fun of playing, than anything meaningful. Each character appears and gives the same spiel about how he or she needs help doing something, which unlocks the four minigames you need to complete to pass the area. After the third or fourth area, it just becomes frustrating to have your playtime elongated by the story, a tale that is something to do with a weird creature trying to get back to Heaven World, and the aforementioned characters needing help to get their flow back… honestly, I don’t know why they actually bothered.

Much of Megamix is about collecting high scores and coins, which are not only for unlocking collectibles in the game’s cafe, but also to help choose the difficulty of each area’s final stage. Here, you get to play a genuinely tricky coin toss challenge, if you fancy it. The easiest of the three difficulties costs the most coins, so the game actively encourages you to play the harder version which is, well… it’s hard. The first you encounter requires you to flip a coin and catch it after three seconds. Initially it sounds easy, but once the timer and/or audio is removed, it makes it harder. These stages aren’t brilliant, but they’re different, and ultimately, holding them up against the remixed, remastered stages that I’m familiar with, they never stood a chance.

There’s plenty of content and plenty to unlock, but Megamix is just such a lovely game. The new visuals and remastered audio look and sound fantastic, and bar a few simple design choices (I don’t want to play a tutorial for every stage before I play it, just give me the option to skip it), it’s undeniably a brilliant entry point for potential new fans. If you’ve played the WarioWare games, and ever had a passing interest in the Rhythm series, this is the game for you.

Some minigames are terrible
Very repetitive

A great entry point for newcomers, but a game that will might feel too familiar for series fans to truly fall in love with.