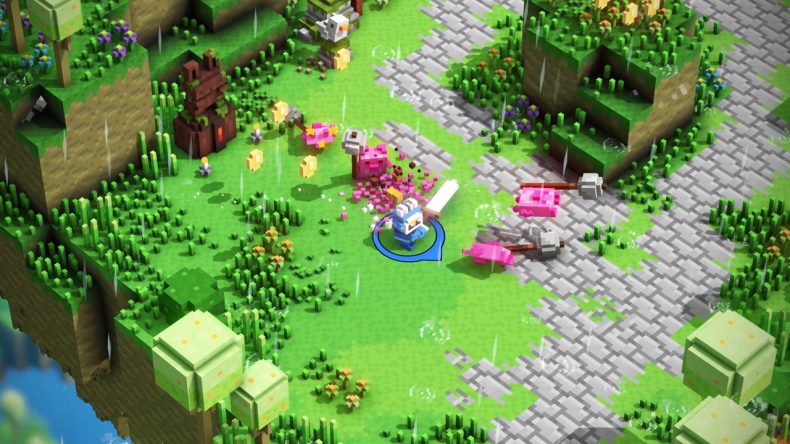 It has been a while since a game has captivated me in quite the way that Riverbond has, not because it’s a deep and profound experience, but because it’s quite the opposite in fact, with simple game play and adorable pixel art style. Its simplicity is its biggest strength, and while it offers very little in terms of challenge, there’s plenty to admire from the different character designs to the fun range of weapons you can equip and the bright, colourful environments. Everything has a lovely, whimsical sheen gently laid over it making the worlds of Riverbond lovely spaces to inhabit, and I thoroughly enjoyed my time with it from start to finish.

At its core, Riverbond is a shoot and slash dungeon crawler set across a series of eight gorgeous voxel environments each with a number of chapters within them. You can play in solo, or with up to three others in local co-operative play. Characters are chosen at the beginning of each chapter in a level and can’t be swapped until you finish. There’s no need to concern yourself with statistical characteristics in your character choice as the only differences between each one is down to whether you would prefer to do battle as the Kid from Bastion, a penguin or even, perhaps, a strip of bacon. In the beginning your choice is limited to four or five skins; however, as you progress you can find others locked away in chests throughout the levels that once located will be ready for you to use in the next one. Gameplay is simple: you either have a melee weapon or a range weapon with others located around each level hidden in chests. Like the character design the weapons are enormous fun to play with, ranging from huge swords that do a lot of damage but are slow to swing, to dual blades that can be swung much faster. There are also completely daft weapons like set of giant bear claws, a spatula, a breeze block and even a gun that fires bees.

There’s a loose story that you follow; you as the hero have been tasked with aiding the various creatures that inhabit the world of Riverbond as something terrible has happened to the Eldra, a group of paternalistic spirits that look after and nurture the various creatures of Riverbond. Each mission is set in a different location with various levels within the mission, all with a different task to complete – simple things like clearing all enemies within one area, rescuing all the captives or locating a key to unlock a door barring your progress. Once you have completed the objectives the mission features a boss battle in a small arena with a huge enemy. Like the rest of the game, the bosses don’t really pose any real threat, but do at least manage to switch up the game play slightly as they require a little more cautious play. Once the boss has been defeated the mission is considered “won” and each player is assigned a ranking to a local leader board. Difficulty could well be a sticking point in a game like this, but Riverbond is very clearly heavily focused on a younger market. The cutesy aesthetic has a top-down Minecraft feel to it that helps make it feel very familiar, and the addition of local co-operative play only lends itself to a game that parents can play with young children. There’s no real sense of threat, and whilst you are hacking and shooting at enemies they dissolve in a pleasing pixellated way that sanitises any sense of real violence. Besides, how much damage can firing a gun that shoots mini rainbows actually do?

Regardless of who Riverbond is aimed at, there is no denying that as an experience it is pretty good fun. Levels have some light environmental puzzles, as well as opportunities to smash everything up in the same satisfying way the LEGO games have done for the past few years, and the frantic top-down play creates its own delightful chaos when played as a co-operative experience. There is perhaps a missed opportunity for replayability once all eight stages have been completed with the omission of online leaderboards where you could aim for the highest score, but it feels churlish to complain too much when the overall experience of Riverbond is one of childish joy.

Riverbond is a shoot and slash dungeon crawler featuring up to four-player local co-op. It's perhaps best suited for a younger audience due to its lack of any real challenge, but the overall experience is one of childish joy.