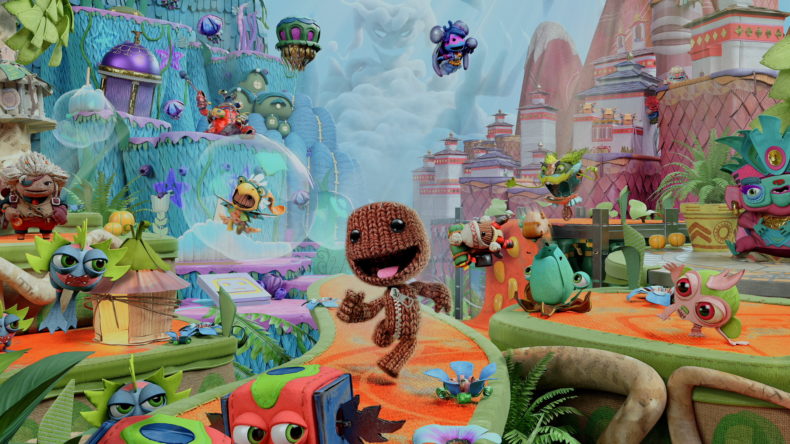 Sackboy: A Big Adventure manages to tick off the younger demographic for the PlayStation 5 launch lineup, but we’ve been here before, haven’t we Knack? It’s been a long time since the cheeky chap graced our consoles with his woollen charm and endearing smile, so I was eager to know whether or not he’s still got that spark he once had in LittleBigPlanet. There aren’t a lot of cute Sony mascots to choose from, and although Astro’s Playroom is a fantastic game, its little white robot protagonist isn’t exactly a household name, yet. Thankfully, Sackboy is here to save the day, along with his own home of Craftworld, and the result is pretty damn special.

An evil jester-type being known as Vex (voiced wonderfully by Richard E. Grant) has enslaved the folks of Craftworld, and it’s up to you to save them. Right from the start, you’re introduced to some wonderful characters, including your wise guardian angel known as Scarlet, and the quirky shopkeeper known as Zom Zom. There’s a lovely tone on display, leaving you feel all warm and fuzzy, and thanks to the stunning level designs, the vibrant nature of Sackboy: A Big Adventure spills out into every facet of the world.

Much like Tearaway, everything has a hand-crafted aesthetic. Felt-covered floors, fabric-stitched walls, strings tied with ribbons for you to climb across, buttons and threads, beads, bells, and leather doorways fill every one of the worlds you get to visit. It’s such a colourful and wonderous place that you’ll want to explore every nook and cranny to collect everything you possibly can. I can’t rate the scenery enough. Sumo Digital has managed to make Craftworld feel cosy, but at the same time they’ve managed to craft some challenging segments into the level design. 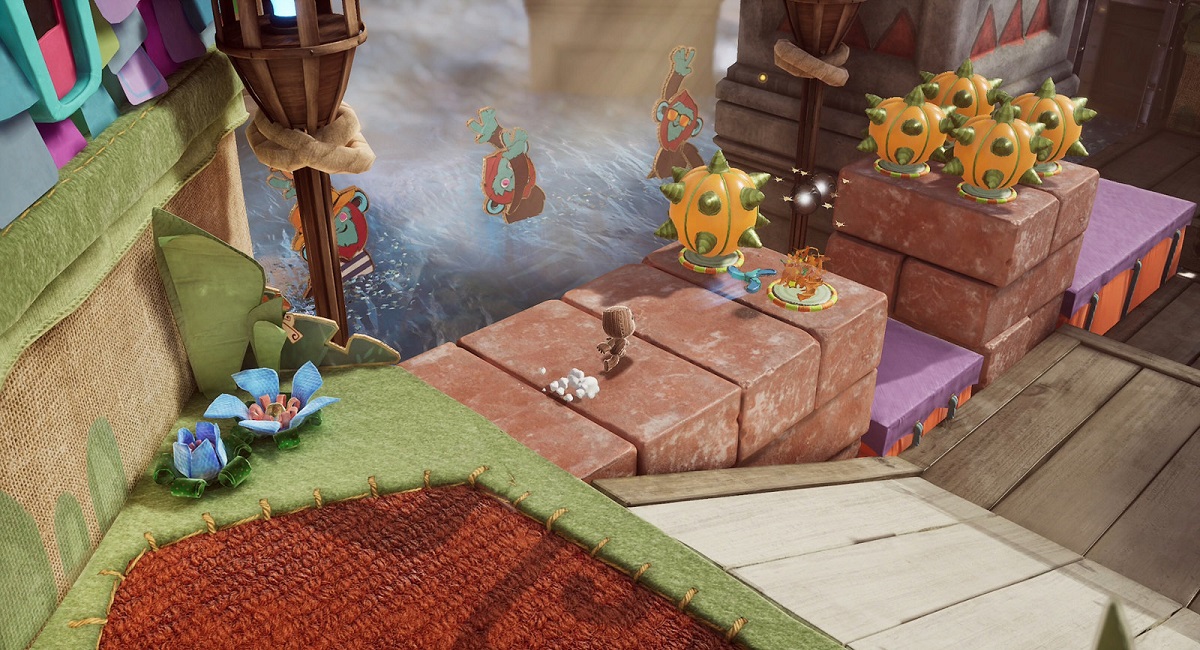 The music is also superb. You’ll often bob your head to subtle nods to popular modern songs, whilst full on shaking your tailfeather to the use of Bruno Mars’ Uptown Funk. I’m fairly sure that the space world basically uses the Futurama theme, and I’m 100% on board with that. The inclusion of pop music helps to make the world alive, but even the original score is pleasant on the ears. Every now and again you’ll hear something you recognise, and it seems entirely on purpose.

Each of the worlds has a theme to it, and you’ll encounter plenty to do along the way. The main goal in almost every level is to collect translucent spheres that provide you with a wad of bells (which can also be collected in the levels) to spend on outfits in Zom Zom’s shop assuming you collect enough. You can also pick up customisable items as you go, along with Dream Orbs that allow you to move on to the next world. Some require you to find them in hidden areas, whilst others will require defeating a type of enemy or solving a puzzle.

The platforming in Sackboy: A Big Adventure is varied, and you’re always being presented with new items to use to get you across particular areas. As you progress, the levels become more adventurous. As you come to the end of the first world, you’ll be in awe of the train level, but all of them try and offer something a little different from the last. You’ll also get to take part in the Knitted Knights time trials. By beating the best time, you’ll gain the most amount of Dream Orbs. 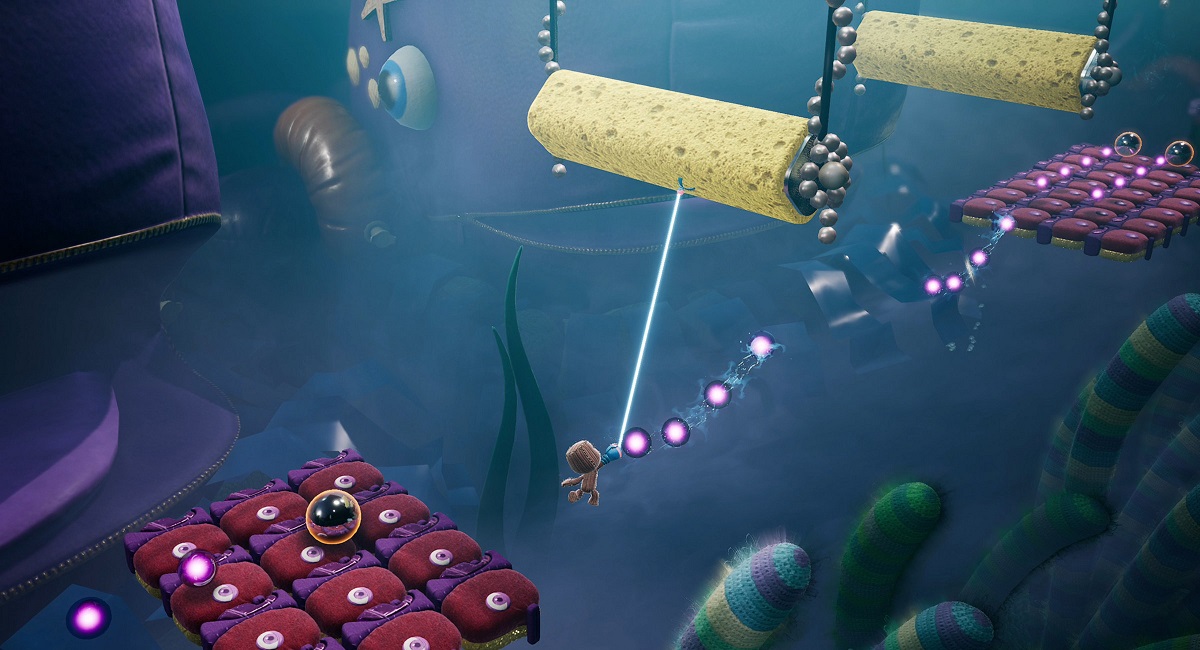 Enemies aren’t particularly tough to defeat, but due to jumping being a concern of mine, I would often miss their heads and land in their path. It’s not that it’s bad, but sometimes it is unclear where you are going to land due to the movement of Sackboy not being as tight as other popular platformers. There are many types of enemy, too. Some will charge at you, others will try and blow you up kamikaze-style, and then there are the blighters that you need to pull their tail until they explode.

Sackboy: A Big Adventure isn’t a particularly difficult game, but it doesn’t need to be. You start off with a set number of lives. If you get hit a couple of times or fall off the scenery, you’ll lose one of them, however, enemies often drop lives so you’ll likely never fail to finish a level. It’s no Crash Bandicoot 4. You’re supposed to have fun. You don’t need to collect all the score bubbles to move forward, just the Dream Orbs, but the fun in trying to find them is what makes the game such a joy to play. 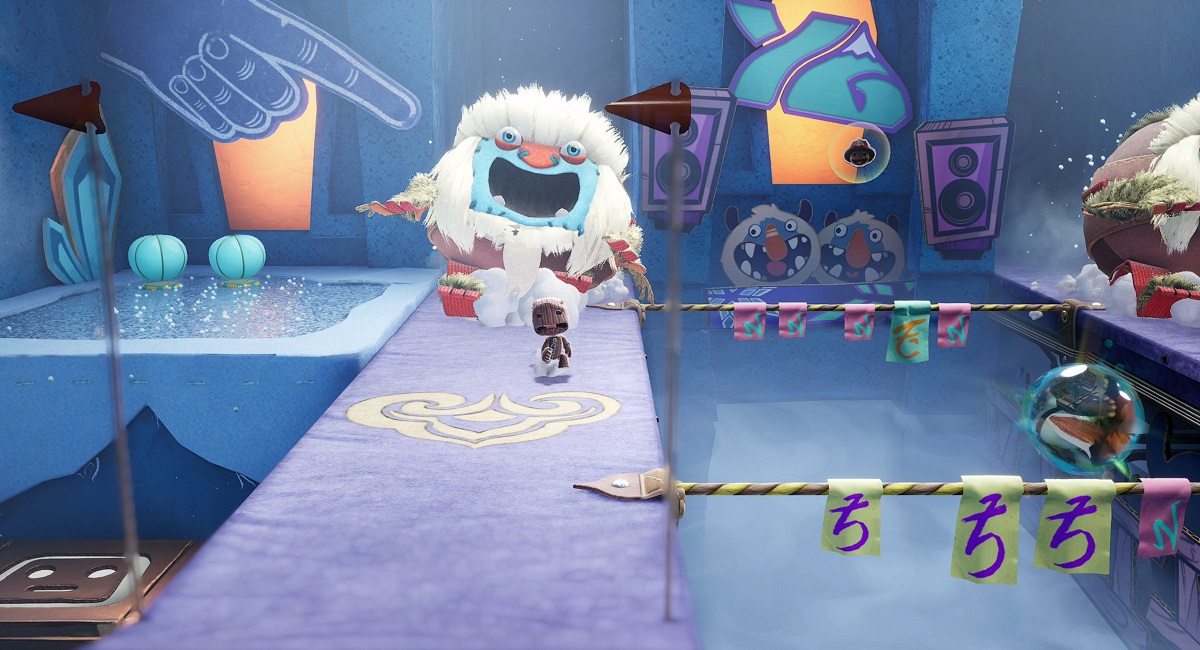 Playing with up to four players locally is a great feature. Thankfully I have two daughters who joined me on my adventure. They loved it, and it’s always great to gauge a child’s reaction to a video game aimed primarily at them. We had loads of fun trying to find everything together, and at times they were better suited to the platforming than I was. There are even levels that can only be played with others, so it’s worth experiencing Sackboy: A Big Adventure together. It is a definite purchase for PS5 users with a family, but the PS4 version runs just as good. I had no glitches with any technical aspects of it, so if you can’t quite afford the next-gen version right now, you’ll still get a lot out of this one.

Sackboy: A Big Adventure features some great platforming across gorgeous levels, with plenty to do and collect along the way. The music is a lovely touch to a rich and fulfilling adventure, and playing with others is the best way to enjoy it. There is so much customisation, with plenty of outfits and colour palettes to change your look as much as you want. This is yet another happy place in gaming, and we all know how important that is right now.

Sackboy: A Big Adventure features some great platforming across gorgeous levels, with plenty to do and collect along the way. The music is a lovely touch to a rich and fulfilling adventure, and playing with others is the best way to enjoy it.