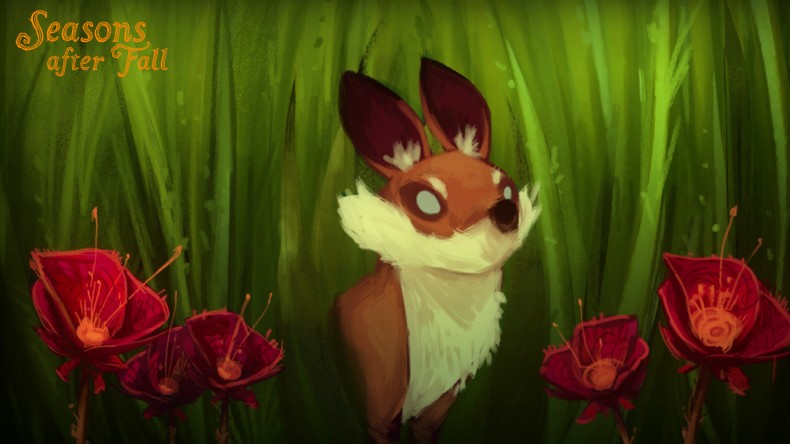 *This review has been updated to include performance and opinion on the PlayStation 4 version, released May 16, 2017.

There’s nothing better than being outside at the zenith of a given season and appreciating nature at its purest; walking through the park and feeling the cold on your cheeks as the snow crunches beneath your feet, or when the blazing sun lights up the sky and you sit in a beer garden with a crisp, cold beverage in your hands. It’s unparalleled, and Seasons After Fall encapsulates the beauty of each one in a charming 2D side-scroller, with a flowing puzzle system and some absolutely stunning visuals.

You play as a cute little fox on a mission to unite four fragments protected by the Guardians of the Seasons, a quartet of animal spirits sworn to protect the powers of the seasons. Throughout effervescent environments filled with a cornucopia of trees, flowers, lakes and creatures, you’ll have the power to manipulate the seasons and help to complete a sacred ritual.

It’s a great mechanic and one you’ll get to grips with in no time. At the click of a button, you’ll open up the tab to switch between the different fragments, with each one shifting the season from one to another. You have to encounter each of the animal spirits to be able to change the seasons, but it won’t take too long before these powers are bestowed upon you. They work in many different capacities and playing around with them is where Seasons After Fall provides its biggest challenge. In winter, you can freeze lakes to walk across them from one embankment to another. There are also plants that launch huge balls of snow into the air, allowing you extra footing to reach a higher platform. In spring, these same plants spout water, and if it falls upon a certain kind of seed, a tree will grow tall and allow you to get to places you wouldn’t have been able to reach before. Also in spring, the showers fill up the lakes and cause them to rise, but in summer the heat dries out the water and causes the lakes to sink; you’re supposed to experiment with the seasons and solve the puzzles of the landscapes, and although you’ll never really struggle, they are tricky enough to keep you trying.

The world is absolutely magnificent, and each season has its own glorious allures. The summer brings the bluest of skies and thick, wavy grass that blows in the soft winds. The autumn covers the forests with orange and brown vitality, and certain flowers and leaves open up in the light. The winter’s white veneer illuminates the world and the ice and snow glistens under the clear sky. The spring’s fresh rain and purple-tinted surroundings encapsulate the creation of nature’s beginnings.

It’s a wonderful world to explore, and the hand-painted visuals are marvellous, but it wouldn’t feel as genuine if it wasn’t for the uplifting soundtrack. The string quartet gives the seasons credence, with cellos and violins imitating rain and wind, breathing life into every moment of play. Playing the game on console, seven months after the game’s original release brings back all the feelings I originally felt. It runs seemlessly on the PlayStation 4, and visually each season feels warm and comforting. My youngest daughter wouldn’t take her eyes off the screen – partially because it appeals to children just as much as it does adults, but her favourite animal is a fox. She wouldn’t take her eyes off the screen, and together, we played through the game together. It was a special experience, mainly because she doesn’t really play videogames (and I wouldn’t expect her to at only four), and it was our first real time playing something as father and daughter.

It may seem like a funny thing to talk about in a review, but Seasons After Fall is a very special little game. It illicits the charm of TV shows like The Animals of Farthing Wood (thirtysomethings should remember), and games like Journey and Ori and the Blind Forest. There’s a magic rooted deep in its story and aesthetic, and not only that, there’s a realisation to be had about just how important the natural world is. There’s so much beauty out there, and Seasons After Fall helps you to appreciate that.

Seasons After Fall is the perfect game to show your kids, or to play when you want to be uplifted. There’s no death – no damage can be done to you and there’s never a need to bite, fight or hurt anything. There’s an underlying message about respecting nature and doing whatever you can to uphold life and our living world. It doesn’t preach or force the message upon you, but rather encourages you to look at the world differently and see what the fox sees – see how important life really is.

Although you’re never pushed to the limit, Swing Swing’s adventure is a glorious achievement in artistic design, and the way you feel while exploring its forests and caves does wonders for your state of mind. It’s uplifting and invigorating, and I wholeheartedly suggest you spend some time in its captivating world.

The relaxing gameplay allows you to spend more time appreciating the merits of its design and message, while soaking in the wonderful musical score.