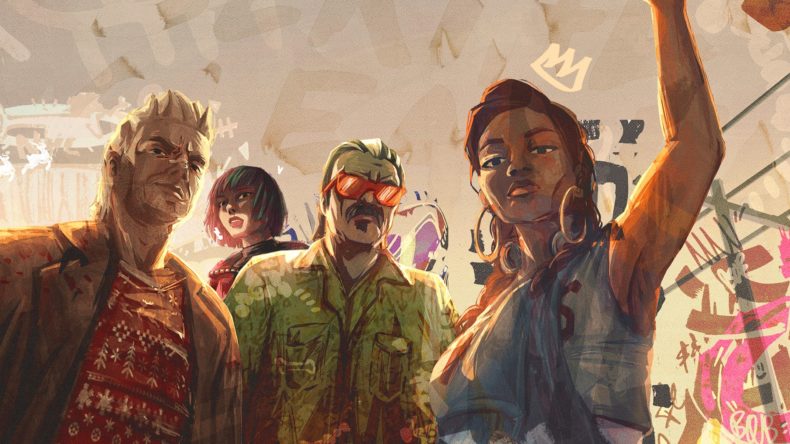 As a sequel-slash-reboot to 2017’s Serial Cleaner, Serial Cleaners (plural) is quite the step up in both visuals and gameplay. The simple sprite-work of Curve Digital’s original is replaced with detailed environments and much more complex level design, and the result is a clever, entertaining, yet infuriatingly paced stealth game.

Taking the form of a series of flashbacks and set-pieces throughout the 70s, 80s and the game’s present day 90s setting, Serial Cleaners follows the fortunes of a group of crime scene cleaners led by Bob, the Winston Wolf-like protagonist of the first game. Working with psycho Hal, hacker Erin, and young protégé Lati, Bob recounts his most famous clean-ups and asks the team to recount theirs, including his recruitment of each of them. 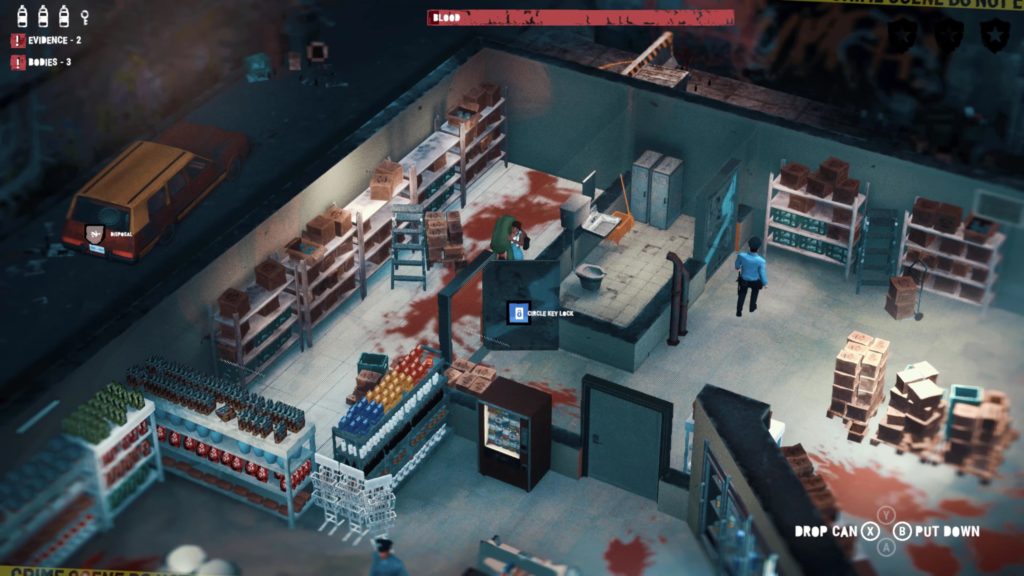 All missions have the same basic set up: crime has happened, there’s blood, bodies and evidence all over the place, and you need to clean it up. In almost every instance, you’ll need to do it while avoiding police, investigating detectives, security guards, other criminals, or nosy passers-by. You can’t choose which Cleaner you take on which mission as the entire game is narrative-based, and they work individually (although you can sometimes call in help which gives you another way out or trunk to dispose of bodies and severed limbs).

Each Cleaner is different though. Hal the psycho can chop up bodies with a chainsaw and then throw the limbs at NPCs to knock them out (they’ll also pass out if they catch him in the process of dismemberment). Then you can stick them in lockers or cubicles to keep them out of the way. However, there’s never enough space to dispose of all of them. Erin is a hacker, who can use her skills to remotely manipulate switches and noise sources, and can crawl through ventilation systems. Lati can vault over low barriers and leave graffiti on the floor that distracts police, and main guy Bob can wrap bodies to avoid public suspicion.

While the stealth is mostly handled well, Serial Cleaners is an incredibly gamey game. Blood is cleaned up using a vacuum cleaner, which each protagonist pulls from thin air and which can even hoover blood from snow. Also, you can drop bodies wherever and as long as you aren’t seen, the NPCs will barely spare a moment’s thought for how corpses are moving around by themselves. Likewise, knock someone down or activate distractions and they’ll only look for you for a little while before shrugging and carrying on. 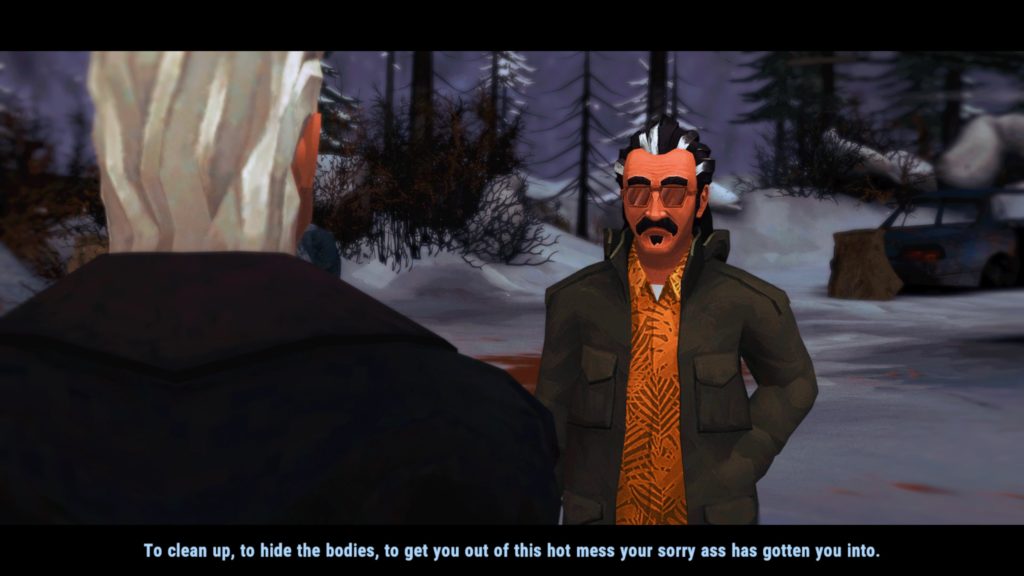 You can commit your crimes of cleanliness in plain view of anyone as long as you’re outside the designated range, and the difference between a cop hearing a vacuum blaring can be as little as one extra step to the right. Concessions have to be made for stealth games, of course, but Serial Cleaners pushes its luck where immersion and realism are concerned.

It’s something of a shame that missions are so A to B. While you can experiment with distraction techniques and such, there aren’t many different ways to approach each problem. In all cases the idea is to take bodies, big evidence, and severed limbs to a disposal point, hoover up a certain amount of blood, and then leave. The difficulty comes in identifying a route to disposal and learning the various guard patrols; once you have that information, missions devolve into a bit of repetition as you schlep to and fro, often very slowly, to get rid of everything. 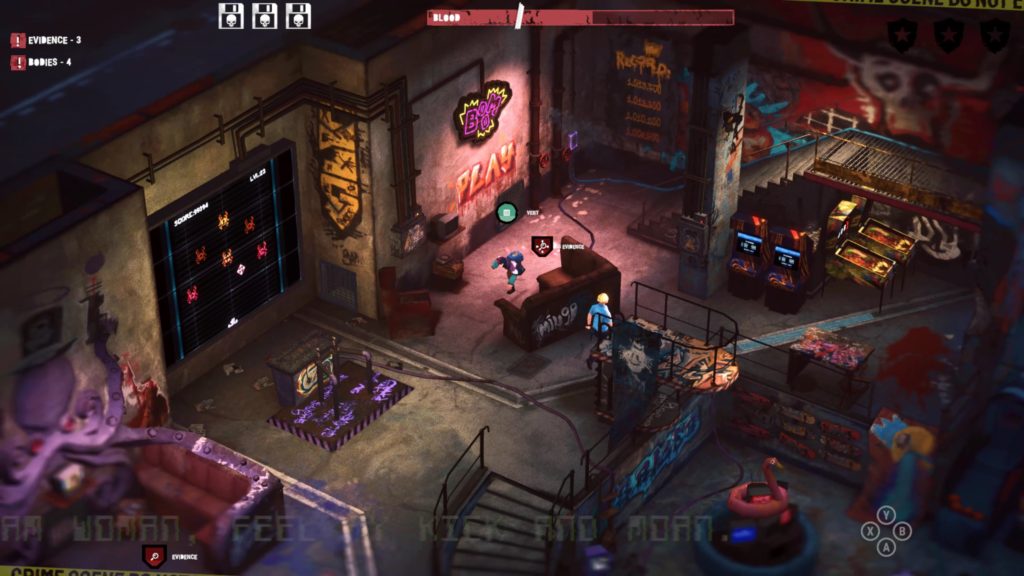 In fact, the pacing can be incredibly off-putting. If you’re spotted and can’t escape quick enough, you’ll restart at the checkpoint (usually the last time you disposed of something), and then it’s back to waiting for patrols to align with your plans, which mostly involves sitting very still and watching. Using the left trigger will activate your “Cleaner Sense”, because of course it does, which allows you to see important elements on the map and the various guards. This allows a certain amount of forward planning, but it’s super easy and super frustrating to run into a third guard you hadn’t spotted because you were too busy watching two others. You also can’t see up and down stairs, so you’re always at risk of walking into something.

Narrative plays a big part in Serial Cleaners. Each of your characters has a backstory to explore, some much bleaker than others, which slowly begin to paint a darkening picture of this life of crime. The writing and delivery are solid, and once you begin to understand some of the Cleaners’ motivations it’s easy to get quite invested. It’s a good thing too, because without it there’d be little reason to care about your Cleaners.

What Serial Cleaners lacks is a sense of urgency. While laid back stealth is a subgenre of its own, it would be nice to be able to incapacitate guards with characters other than Hal, even if only for a limited time. Even when the police are looking for you, the music never shifts from lazy lounge jazz, and so there’s little sense of escalation or excitement. It’s tense at times, of course, but the AI is so dumb you’re usually comfortably sure you’ll escape anyway – and that just makes some parts of the game feel tedious.

As a straight, old-school stealth experience Serial Cleaners certainly delivers. There’s very little fluff or filler, with compact mission areas, clear objectives and little reason to deviate from the plan. But it also suffers from a lack of real variety, and is rarely exciting or tense enough to be thrilling. Failure is often punished by nothing but more waiting around, which eventually becomes dull. But it’s well-written, good-looking, and the atmosphere is on-point even when the immersion is taking a knock. If you’re after something a little more cerebral and don’t mind getting your hands dirty, Serial Cleaners is an enjoyable, if limited, stealth adventure.

Can feel a bit samey
Lots of waiting around
Rarely exciting