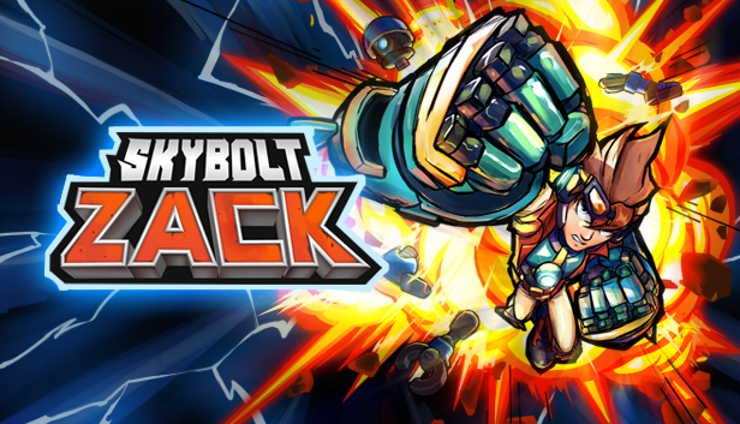 Learning can be fun given the right environment, and it’s a necessity to be able to improve enough to face the challenges ahead. Be it maths or video games, a good tutorial and practice can transform a novice into an expert. There’s little more rewarding than seeing an improvement in your abilities, and realising that all your hard work and dedication is paying off. My point it is, Skybolt Zack absolutely took me to school.

After the briefest of cutscenes, you are thrown (literally as it happens) into your first tutorial. It doesn’t take long to realise Skybolt Zack is anything but your standard 2d platformer. Although you can run and jump freely, most of Zack’s movement is done by boosting off of enemies. Each enemy is one of 4 colours, and by pressing the appropriate face button they send you careering in your chosen direction. This fast-paced movement ends up meaning that traversing a stage feels more like a rhythm game than a platformer. The quick addition of an air dash and a long range attack mean that (with a lot of practice) you rarely need to touch the ground, which feels amazing. Pressing the wrong button for an enemy will halt your movement however, and often sends you tumbling into something damaging. With each new stage comes a variety of new enemies and obstacles to work your way around. Some enemies have damaging spikes on a specific side, some enemies change colour after each hit, and some enemies shoot out a colourful selection of bullets to fulfil all your boosting needs. Familiarising yourself with how each new robotic foe can be used to propel you around a stage keeps the game fresh, while also adding even more layers of complexity.

Alongside the host of spikes, enemies and obstacles in the world of Skybolt Zack, the majority of stages have multiple exit gates. Each exit is at a different altitude, and takes you to a different level. One wrong button press can take you from the glory of the top exit, all the way down to bottom. These alternate stages, coupled with a ranking system that rewards speed, staying off the ground and boost combos, mean that there is a ton of replayability for those who want it. High ranks and harder levels should be the least of your concern when beginning your adventure, however. I don’t say this lightly: Skybolt Zack is difficult. It’s not often for me that a game requires so much practice that I restart the game halfway through, solely to enable myself to stand a chance of finishing it – but that’s where I found myself. It’s definitely not for the faint of heart or the impatient, and after multiple attempts to beat a particular level frustration may well start to build.

This is not helped by sound design in the game. When building up a boost combo across multiple enemies, the music begins to intensify as the combo builds. It’s a great effect – however when a combo is lost, a rewind effect is played and the music returns to its original slower pace. It manages to serve as a regular reminder of your failure. The music is great though, and when you are able to play competently the epic swelling is a real bonus. Despite a less than accessible level of difficulty, Skybolt Zack features a great amount of customisation options to tailor the experience to your needs as much as possible. There are multiple colour settings for the enemies, labelled M, S and N to map the colours to those of the buttons on Microsoft, Sony or Nintendo’s controllers. There’s also a completely custom option, on the off chance that your controller of choice doesn’t conform to button colour norms.

Skybolt Zack requires a lot of practice and dedication to get past it’s incredibly steep learning curve. If you’re able to manage that though, an incredibly satisfying and unique game awaits. With S ranks and tougher routes encouraging multiple playthroughs, you could easily sink hours of your life into mastering the nuances of the game’s movement.

A very unique platformer with fast paced and fluid movement. If you are able to overcome the difficulty, you'll find a wealth of content and a ton of interesting ideas that prevent Skybolt Zack from ever getting stale.